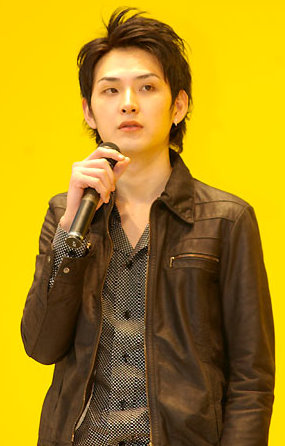 Ryuhei was born in Tokyo on May 9, 1983. He is the son of the famous actor Yusaku Matsuda and the actress Miyuki Matsuda (Audition). He was six when his father died and had no plans of going into acting. He was approached however when he was fifteen by the director Oshima Nagisa, who wanted him to star in his samurai movie Taboo (Gohatto). After that role, Ryuhei discovered he enjoyed acting and shortly after dropped out of high school to pursue an acting career. He is currently a very popular and sucessful actor in Japan.

Neko Feb 11 2020 9:25 am Ryuhei is one of a kind: a subtle actor who's at his best when dealing with psychologically complex, disturbed characters, yet also endearingly charming when playing the nerd. Notoriously reserved and introverted but so incredibly cool...

RyuHanako Jul 02 2018 7:15 pm I fell in love with him after watching him in "Eigyo bucho Kira Natsuko". Right when I first saw him I was strongly impressed by his eyes! The sharp- shaped eyes with a cold eyesight. However, at first I didn't really like him, instead I was afraid of him! Really ? Maybe because of his cold eyes ? After that his acting pursued me so much and made me to fall in love. I think his acting style is very unique, it's totally different to other actors! Gentle, calm, indifferent but also very careful, thoughtful, introvert... are what I think about him and his characters he played!

Reya Dec 28 2016 2:39 am Any recommendations of more 'emotional' movies with him? He plays the serious, stoic role very well, but I guess I want to check out more of his work since I've continuously seen people rave about him. I think he was great in Mahoro Eki Mae Bangaichi.

kaniko Nov 20 2016 8:36 am @eat his private life is private, and that's normal for Japanese actor. Fyi: he married Lina Ohta, a model/actress/singer. there was a pic on the internet when he walk with his wife, his mom and his daughter. but you can only see his daughter's leg. (sorry for my bad english)

Eat Oct 09 2016 9:38 am Anyone knew anything about his private life? About his wife and daughter. Why there was not any family photo in any media? Why it seem to be so secret and privacy? or this is normal for Japanese actor.

jejejeh Oct 18 2015 12:41 pm I love him in amachan (mizuguchi-san) and mahoro ekimae bangaichi (gyoten), etc. I really really really really love him. He's a good actor. I hope he will follow rinko kikuchi and ken watanabe (hollywood). You can do it, Ryuhei-sama!!! Ganbare ;)

RyuAngel May 04 2015 8:50 am He is just amazing *_*. Beautiful, talented full of everything that a good actor need. I have seen some of this movies (a.e. nightmare detective 1&2, Mahoro Ekimae Tada Benriken, Mahoro Ekimae Kyousoukyoku ) , his series and so on. just love him. waiting for his upcomming movies.

Love you Ryuhei (I wish u were unmarried ;))

RyuShota Apr 25 2014 12:55 pm @FeKimi: I am quite disappointed when knowing that he just got a very few line :( but i am glad i read your comment ∑(´▽｀ﾉ)ﾉ! Super excited to hear his Japlish English hahaha I guess its absolutely cute, right?! I am fan-girling too with you here (*≧艸≦) so much love for Ryuhei-san!

Hope the hundred something episodes won't put me off

Rei Nov 29 2013 5:37 pm I always though his face is really resemble the classical japanese samurai painting, with cat eyes and thin curling upward mouth :p (well, when he's without beard though)

i love Ryuhei so much...he is one of my fav actor, his acting is great not to mention gonna play in The Raid 2, wish i can see Ryuhei while shooting here ^^ all the best Ryuhei, Ganbatte (* 3 *)

Lil'Tokyo Dec 16 2012 8:01 am Loved him in Blue Spring! <3 Even thought I didn't really understand the movie/meaning behind it.... BTW his eyes got something i dunno what it is but i really like it!

FeKimi Oct 31 2010 10:08 pm He's definitely a great actor with a strong performance!! My favorite film of his is "Blue Spring" and also his 2 movies "Rampo Jigoku" and "Nightmare Detective2" are become The 50 Best Asian Horror Movies in This Century... Great Job, Matsuda-sama!! Can't wait for your future movies!!

Sasori Sep 18 2010 1:39 pm Exelent actor and a total hottie. Eather I've gone blind or they didn't add Kareoke Terror in the list of movies that he is in. o.o

Hummy Jun 01 2010 3:46 am I first saw him in Blue Spring and thought he was exceptional. Since then, I've tried to follow his film work, it seems very apparent that he makes excellent choices for films that vary in style and genre.

yoru Jan 06 2010 9:14 am I've watched most of his movies and so far they are really great. The only movies shown in the list that i can't find are Happiness in August, Izo, Chosyu 5, Purukogi and Life Can Be So Wonderful.