The Foreign Duck, the Native Duck and God in a Coin Locker 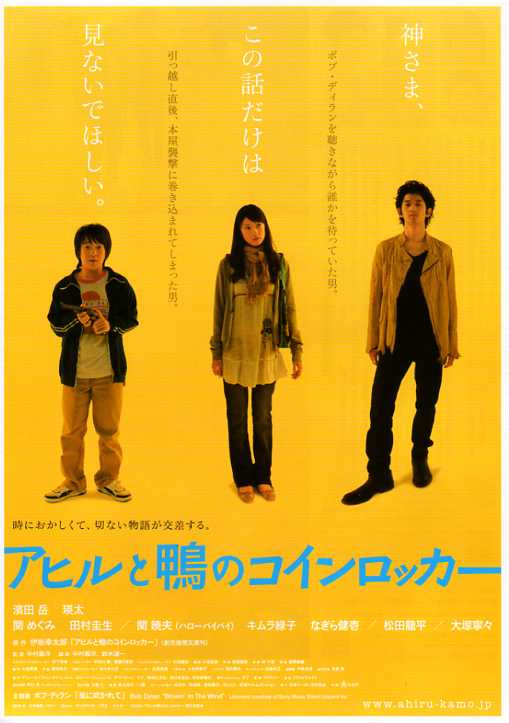 "The Foreign Duck, the Native Duck and God in a Coin Locker" unfolds over the course of six action-packed days, with flashbacks. On the first Shiina (Gaku Hamada), a freshmen at a university in Sendai, moves into a new apartment. A Bob Dylan fan, he is singing "Blowin' in the Wind" to himself when he is greeted by his new neighbor, Kawasaki (Eita). Being imposingly tall and having an air of confidence, Kawasaki is the polar opposite of the short, nervous, but somehow determined Shiina, but he announces himself as another Dylan fan. Dylan's singing, Kawasaki proclaims, is like "the voice of God."

Soon Kawasaki is taking Shiina into not only his apartment, but his confidence. He tells his new friend he wants to steal a Kojien dictionary for another neighbor — an exchange student from Bhutan — and needs Shiina's help. He also gives Shiina a warning that sounds as loopy as his plan: Beware the owner of a nearby pet shop, the sexy but dangerous Reiko (Nene Otsuka).

If Shiina were smart, he would run in the opposite direction, but instead he finds himself drawn irresistibly into Kawasaki's orbit. The next day, Kawasaki confesses to Shiina that he is the former lover of Kotomi (Megumi Seki), a girl who once worked at Reiko's shop, but threw him over for the Bhutanese. So what is his motive for helping the guy? While puzzling this over, Shiina agrees to help Kawasaki with his seemingly absurd robbery, standing guard outside a bookshop's back door with a replica pistol.

lonelily Feb 13 2011 12:09 pm This is just one of my fav', if not the my fav' japanese movie i've seen lately. It is funny, touching and sad... A bittersweet and nice movie with great actors. Worth watching imo !