Phone Call to the Bar 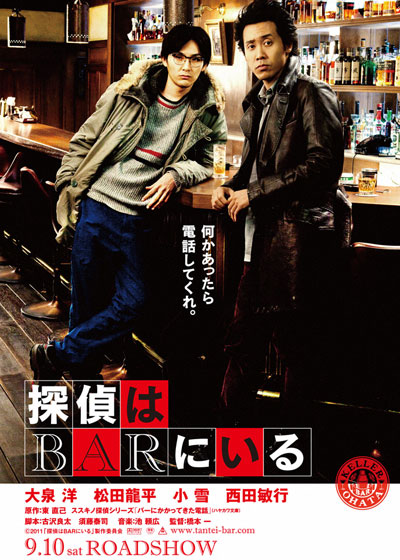 In the Susukino red light district of Sapporo, a private detective (Yo Oizumi) drinks alcohol with his driver Takada (Ryuhei Matsuda) in his favorite bar. There he receives a phone call from a woman who identifies herself as Kyoko Kondo. The woman asks the detective to complete a simple task. The detective, having an excellant sense for danger, thinks the work is easy and accepts the case. The next day he begins the investigation.

Not longer after he starts, the private detective is kidnapped and buried under snow. He barely manages to get away thanks to the arrival of his driver Takada. The detective is now angry and vows revenge. He then receives another phone call from Kyoko Kondo. The private detective and Takada investigate further and they soon comes across a mysterious woman named Saori (Koyuki), a mob boss named Toshio Kirishima (Toshiyuki Nishida) and four murder cases ...