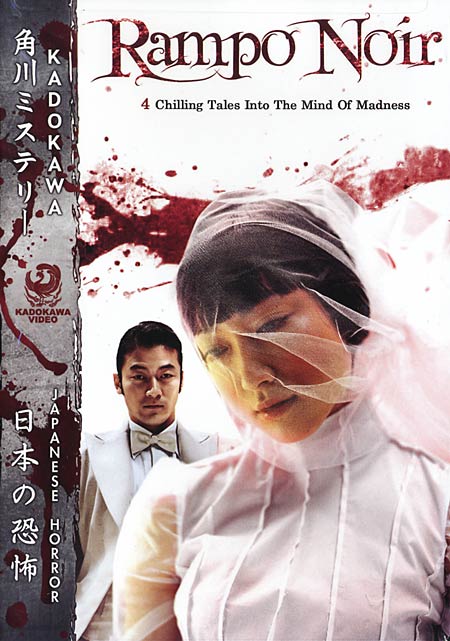 Just when you thought J-Horror had nothing original left to offer, Rampo Noir (a.k.a. Rampo Jigoku) presents us with an intoxicating array of challenging and truly terrifying imagery. This horror anthology takes its cue from the short fiction of writer Taro Hirai, better known by his nomme du plume Edogawa Rampo - wordplay on the name of legendary writer Edgar Allan Poe. Acclaimed MV director Takeuchi Suguru begins proceedings with Mars Canal, which sees a naked man (Asano Tadanobu) collapse at the edge of a lake that descends, seemingly into the bowels of hell itself. This segment is used to effectively tie together the three main narrative segments of the film.

Mirror Hell, directed by Jissoji Akio, sees a detective (Asano again) following a trail of beautiful female corpses back to a mad mirror maker. The Caterpillar (by Sato Hisayasu) sees a limbless war veteran return home only to be systematically abused by his wife. And in Crawling Bugs, by manga artist Kaneko Atsushi, a chauffeur (Asano yet again) becomes obsessed with his actress employer.

This is one of the most *enter every superlative that comes to your mind* artsy horror film I've ever seen (well Anti-Christ ranks up there too but this has the edge a bit because it's an anthology). It's definitely not everyone's cup of tea due to its bizarre premise and production but if you're into mind testing movies that leaves questioning everyone, then for sure watch this one.

elmicnip May 03 2011 8:47 pm To whom it may concern, This collection of Rampo stories is intense. Every moment of it is filled with suspense and mind-bending reality. I highly recommend this video to anyone who has the stomach for it. It will shock you and twist up your insides until the very end; oh, and what an ending it is. Faint of heart need not apply. Enjoy the show, ElMicNip