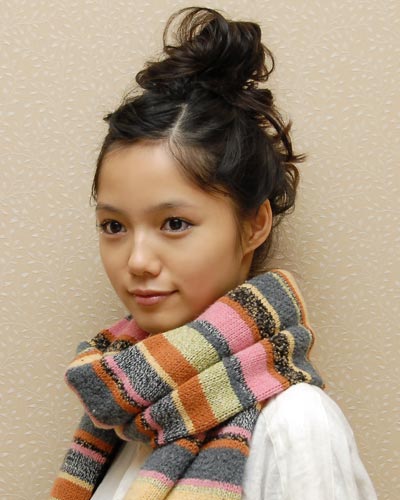 Born in 1985 in Tokyo, Japan, Aoi Miyazaki began her acting career in television commercials at the young age of four. When Miyzaki was 14, she began to draw international attention for her role as the survivor of a traumatic bus hijack in Shinji Aoyama's Eureka. The film won the FIPRESCI Prize at the Cannes Film Festival 2000, and resulted in her receiving the Best New Actress Award of the Japanese Professional Movie Awards.

Later, she won Best Actress Awards in the Nantes Festival of the 3 Continents and the Cinemanila International Film Festival for her convincing performance in Harmful Insect. She teamed up with Aoyama again in Eli, Eli, lema sabachthani?, an Un Certain Regard selection at Cannes 2005. Later in the same year, Aoi Miyazaki co-starred with Mika Nakashima in the mainstream & commercially successful Nana, which boosted her career to a new level of popularity.

Beyond acting, Aoi Miyzaki has become a much sought after spokesperson and model. She has appeared in commercials for major corporations like Aflac, Tokyo Metro, and Olympus. In early 2008 Aoi Miyazaki was also selected as Emperio Armani's new print advertisement model.

With each year Aoi Miyazaki has taken a more prominent position in activism projects. In 2005, Aoi Miyazaki with older brother Masaru Miyazaki traveled to India to experience firsthand poverty stricken in that area and highlight those problems to their fans via their 2006 photobook Tarinai Peace. In 2006, the siblings traveled to Denmark & Finland to investigate global warming. Their experiences were then published in their 2007 photobook Love.Peace & Green Tarinai Peace2. More recently, in April, 2008, Aoi Miyazaki took part in the Gold Ribbon Walking event in Roppongi, Tokyo to raise awareness and funds for childhood cancer. Her 2008 film Children of the Dark also addresses issues of child exploitation.

rowen chisholme Jul 16 2017 2:37 pm Heavenly Forest is the film I will watch over-and-over-and-over again in order to build-up the force within me needed to end my life.I am asexual;this film broke me completely.She - her character - is the unattainable my sense-of-taste and loneliness has been searching for all my life.And watching him stand before her image in the art gallery was a sharp.unsparing mirror.She was beyond the feelings that moment generated in him.....welcome to my life.women are 3-D images kept a million distances away from the glass wall which crowds-in on me everytime I get lonely.

Rainer Nov 30 2014 11:01 am her singing is not bad either in the movie Solanin oh hey Kai...just because the camera strap is made of hemp doesn't make her a pothead...plenty of people use things made of hemp

KAI Sep 22 2013 8:34 am "One of Aoi Miyazaki's favorite hobbies is photography. Her camera of choice is a Nikon Fm3A Body Silver camera with Ai Nikkor 45mm F2.8P lens. She normally carries the camera with her own self-made strap knitted from hemp. "

~ Did anybody miss this... shes actually a pothead irl.

Jezreel Padua Aug 04 2012 9:12 pm i really like your smile <3 whoah!! your movie heavenly forest really makes me cry when i watch it.. I LOVE YOU so much!! you are the first japanese actress ive ever liked!! ur smile is infectious

don Apr 09 2012 9:33 pm you is my dream girl aoi miyazaki you a woman simple sederhana descoda.blogspot

After rumors and speculation, it’s now official. On December 28th, actress Miyazaki Aoi (26) and actor Takaoka Sosuke (29) sent out a join fax to the media, and announced that they have officially separated. According to the announcement, they registered their divorce on the 28th after finishing their last job for the year. The concluded the announcement saying, “For now, please watch over calmly the future of each of us who will go on separate paths.” They’re not planning to hold a press conference nor hold interviews in regards to the divorce. Source & Image: Sanspo

mehak ali Sep 15 2010 8:06 am she is so cute and nice i like her acting in tada kimi wo aisheteru its nice movie.best of luck aoi

Michael Lee Apr 13 2008 11:08 am From comedy to indie films to drama she does it all. Love Aoi Miyzaki ...can't wait to see Children of the Dark and Kagehinata ni Saku!