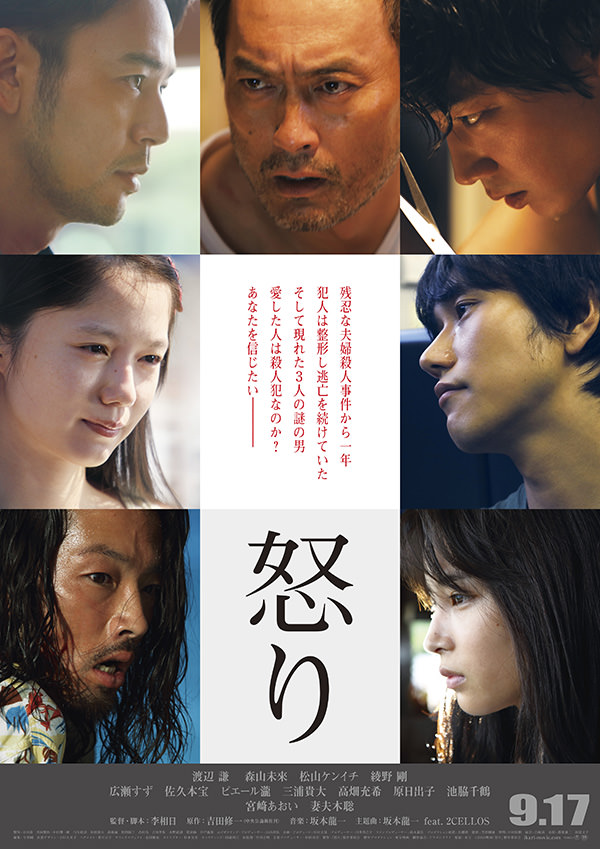 A man brutally murders a married couple and leaves behind the words "Ikari" ("Anger") written with their blood. The killer undergoes plastic surgery and flees.

At 3 different locations in Japan, a male stranger appear. People there suspect that the stranger might be the murderer.

At a fishing harbor in Chiba, Yohei Maki (Ken Watanabe) works at the harbor and he has a daughter, Aiko (Aoi Miyazaki). Aiko begins to date Tetsuya Tashiro (Kenichi Matsuyama). Yohei begins to suspect that his daughter's boyfriend might be the killer, because he is using a fake name.

In downtown Tokyo, gay male Yuma Fujita (Satoshi Tsumabuki) works at an advertising agency. He meets Naoto Onishi (Go Ayano) and they begin to live together. While getting Naoto to open his mind, Yuma begins to suspect Naoto as the killer.

In Okinawa, Izumi Komiya (Suzu Hirose) and her mother move to an isolated island there. One day, she takes a walk and meets Shingo Tanaka (Mirai Moriyama). The young is backpacking alone. Izumi gets close to Shingo, but Shingo asks Izumi to not to tell others about him.

Rodger Parker Aug 15 2020 10:28 am A very powerful storyline and superb performances but nearly ruined by a dreadful soundtrack that seemed quite incongruous.

Glyn Ne Lein Jun 29 2018 2:30 am Okay na film is good but leaving me that kind of ending is not very good at all! Well, shout out to the casts, writer, director, etc. for the INTENSE mooooovviiiieeeee EVEEEEEEEEeeerrrr!! ?

tsuyoi_hikari Jun 18 2018 9:56 pm 8/10 - Interesting movie about how suspicion can destroy yours and your loved ones' lives. The story deals with prejudices and regrets and it all comes together perfectly in this tiny movie in 3 different interconnected stories. I thought Tsumabuki Satoshi looked the most attractive he ever been in here.

Clear Apr 25 2018 5:46 pm the cast are amazing, and the acting are superb too. some of the dialogues really hits me. every characters make me care for them. though this is more like slice of life/drama movie than a thriller that the synopsis / premise offered. I do find myself immersed in the story of each sub-plots, and while guessing (there are several clues given but you might be not really care about it, until it reached the middle), I also hope a certain character to be not the killer lol, fortunately he isn't. if you want a movie that's entertaining, it really depends about what you find entertaining, but really, it isn't a movie that'll give you a good feeling. beware of certain scenes though, trigger warning is applied. There are some things that are easy to guess, but overall it's an excellent movie.

Aoi Oct 31 2017 3:26 pm This is one of the best movies I have watched. 10/10. It brought me to tears. Excellent performance from all actor ken Watanabe, satoshi, ayano, aoi, kenichi, etc. Superb. It kept me engrossed. Please watch it.

Jay Quintana Jun 08 2017 3:29 am Excellent movie. But don't watch this if you want to feel good about humanity.

Satoshi HOT Apr 07 2017 3:26 am This is a great film! Satoshi shows his pubic hair here, and he humps his dick on another actor!

the handmaiden Dec 12 2016 3:29 am Watched it at Busan International Film Festival. Performances from the star-studded cast were amazing, especially Satoshi Tsumabuki&Aoi Miyazaki

Smoker Sep 16 2016 6:03 pm This was an incredible movie. Watched it at TIFF. However it did strengthen my hate for American GI.

RiriRaRin Aug 22 2015 6:00 am Uwoooooo star casts! star casts! Going to definitely love the tension wondering who is the real killer. Tsumabuki Satoshi & Ayano Gou as lovers PLUS Ayano Gou as the suspect???!!! Dearest, too hot to miss!!

Haruka Aug 19 2015 9:15 pm I can't imagine Satoshi Tsumabuki role here is a gay and his boyfriend was Gou Ayano! Well they're both great actors I know they act it great as lovers! This movie have a huge talented casting like Terra Formars live action movie