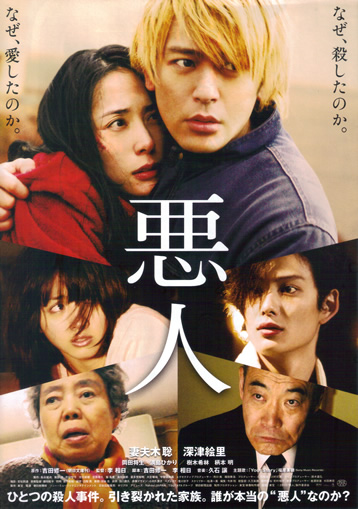 Yuichi Shimizu (Satoshi Tsumabuki) is a young man who takes care of his grandparents in a decaying fishing village in Nagasaki. His grandparents raised Yuichi instead of his mother. Yuichi now works as a civil employee. He is a lonely man.

Then one day, Yuichi receives an email. The email is from Mitsuyo Magome (Eri Fukatsu), a woman from Saga. Yuichi and Mitsuyo exchanged emails in the past after meeting through an online dating site. Mitsuyo currently lives a mundane life, working at a men's clothing store and living with her younger sister. Looking for companionship, Mitsuyo decided to reach out to Yuichi after a lengthy time without correspondence.

The two lonely souls then meet for the first time and throw themselves into a moment of love. By this time, Yuichi is now a wanted criminal and his face appears on the news. Nevertheless, Mitsuyo persuades Yuichi to run away with her and not turn himself in. Running away places heavy burdens on their families as well as the victim's family. 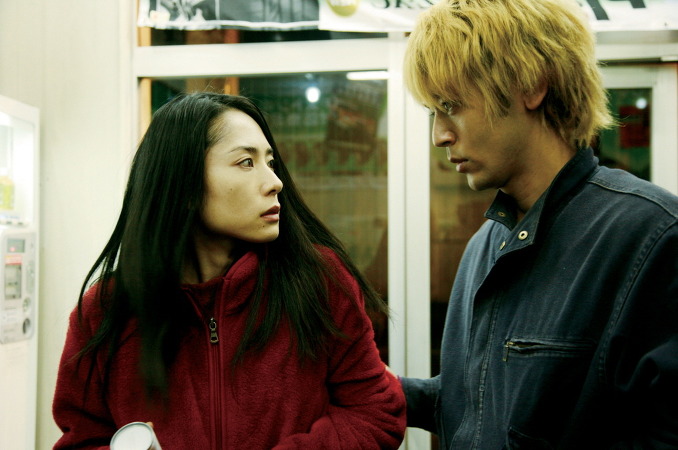 Joey Jan 29 2017 11:08 pm Loved this film. Definitely one of those stories that leave you feeling conflicted and melancholy about the whole. The acting was incredible and the chemistry between Satoshi and Eri was amazing.

DaDa Nov 13 2012 8:39 pm Watched this movie multiple times and I never get tired of it. I feel SO bad for Mitsuyo at the end...she finally found her other half and well you know...also poor Yuichi, he was put in a difficult position.

The character I had absolutely NO sympathy for was the dead girl. I didn't like how she treated her father & Yuichi...she was also a ho. I'm glad Masuo saw right through her even though he acted like an ass himself. XD

I'm surprised this movie didn't get more international attention though. Or at least an oscar nomination for best foreign film and best actress for eri fukatsu who was painfully good. Ok, I'm done. LOL

yam Oct 09 2012 9:18 am the story is very touching because all of us nowadays liked fiction movies especially me but when i watched this movie ohhh my god i cant stop crying because of the flow of story

kaz May 04 2011 8:20 am All actor and actress are really good. Tsumabuki and Fukatu get main japanese academy award. But support actor is Okada and actress is Hikari Mitusima are very good akunin.

nikki Apr 16 2011 7:25 pm This movie is a masterpiece. Tsumabuki and Fukatsu have amazing chemistry.