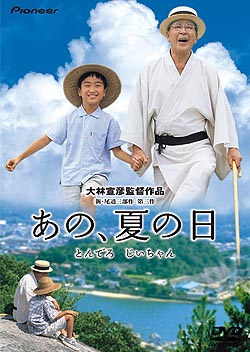 Veteran filmmaker Nobuhiko Obayashi rounds out the second of his two trilogies about his hometown of Onomichi with this film about the budding relationship between a young lad and an eccentric old man. Fifth-grader Yuta (Takuro Atsugi) is a typical city child looking forward to a summer of reading comic books and playing video games. Instead, he is bundled off to his grandparent's house on the Inland Sea. His grandfather, Yuta's parents explain, has been acting strangely as of late -- he eats the offerings in the family altar and once tried to lead attendants at a funeral in a rousing round of calisthenics. Since his mother and father are swamped with work, and his elder sister (Nana Sano) is studying for college entrance exams, Yuta has been asked to look after Grandpa. The old man takes Yuta on a tour of Onomichi, regaling him with 70 years of its history. Along the way, Grandpa slips in and out of the past, increasingly unable to discern between the two.