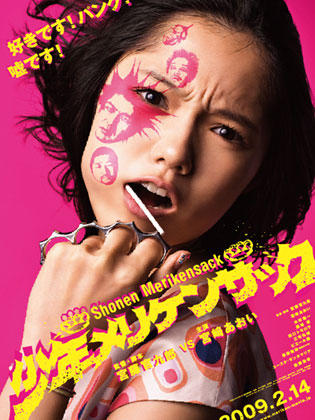 Young record company talent scout Kanna Kurita (Aoi Miyazaki) finds a video clip of an abrasive punk rock band on the Internet. Although she knows nothing about punk music or even likes punk music, she feels the band could be the next big thing and bursts into Tokita’s (Yusuke Santamaria) office to tell him so. Tokita watches the video clip and orders Kanna to find the band and sign them to a contract. This starts Kanna’s quest to find the band known as “The Shonen Merikensack” (which translates into English as “The Brass Knuckle Boys”). What Kanna doesn’t know, but will find out soon enough, is that the video clip was filmed 25 years ago and the band members are now all washed up middle aged men. 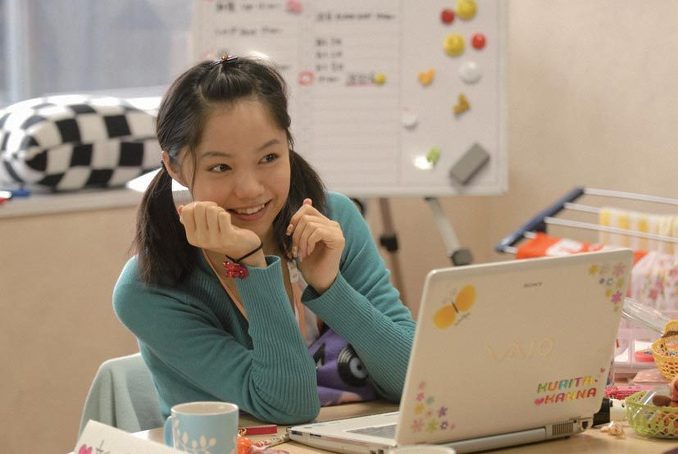 martini May 19 2012 1:34 pm hello please -- what is the name of the other actress from haruo's flashback of 25 years? the actress who asked for autograph on her back/ shirt "make it to miho" then they went to hotel room... arigatou

Syd Jan 13 2012 12:58 pm Just saw the movie, was quite enjoyable. Was wondering what the double sense with 'surfing to pass the time' in the song lyrics was?

Ki Sep 06 2009 12:32 pm From the multi-talented Kankuro Kudo, who has written screenplays for such films as “Drugstore Girl,” “69,” and “Maiko haaaan!!!,” we get the fun punk music inspired film “The Shonen Merikensack.” Kankuro Kudo this time around takes the dual role of screen writer and director and his first decision was probably his best – casting the ultra lovely Aoi Miyazaki in her first pure comedic lead role (that title actually may go to the 2008 film “Flowers in the Shadow” but I haven’t watched that film – so will go with “The Shonen Merikensack” as her first comedic role). How does Aoi Miyazaki fare in a goof-ball comedy you may ask? Just as smoothly as she shifted gears in 2005 from indie films to a rich Barbie Doll like character in the mainstream film “Nana.”

“The Shonen Merikensack” starts off firing on all cylinders, with Aoi Miyazaki dominating the screen with her precocious screen presence. Once Kanna finds the members of “The Shonen Merikensack” the movie shifts into its second act of its three part tale. Koichi Sato does a fine job as bassist Akio – a Sid Vicious like middle aged man, Yuichi Kimura plays the stoic guitarist Haruo – brother of Akio and often bickering opponent, Tomorowo Taguchi is nearly unidentifiable as the Johnny Rotten like vocalist, and finally Hiroki Miyake plays the recovering from hemorrhoids surgery drummer for “The Shonen Merikensack.” During the movie’s second act, the film turns into a road movie of sorts as Kanna drives the band around in her father’s mini van. The final act consists of all the major problems between Kanna and her boyfriend, as well as the quibbles between brothers Akio and Haruo being resolved.

By now this review may seem like an ode to Aoi Miyazaki, but she’s deserving of it and its hard to quantify how charming she is in “The Shonen Merikensack.” She’ll often perform with exaggerated expressions, which for some performers may come off as annoying, but with Aoi Miyazaki you’ll likely find yourself laughing for no real reason. The movie itself has only one non deal breaker drawback – which is the gradual shift away from Aoi Miyazaki to the band members of “The Shonen Merikensack.” The band members can’t maintain the same amount of interest that Aoi Miyzaki is able to elicit. Also, the goofy comedy vibe found in the early portions of the film becomes more muted because of this shift. In a perfect scenario the movie would have stayed with Aoi Miyazaki as the central point of the film and continue its non-stop slapstick moments to the end.