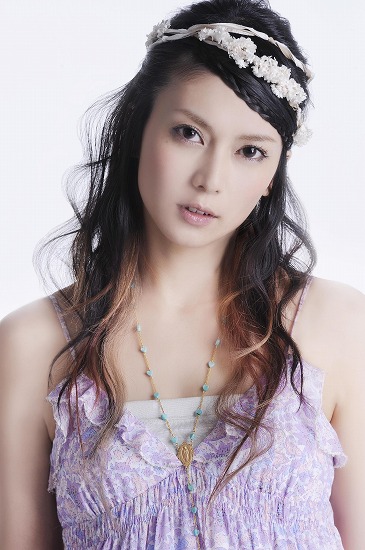 She was discovered at 14 by a star agent, and worked in many TV shows and commercials. Her stage name is taken from the main character of Junko Kawakami's manga "Golden Delicious Apple Sherbet".

She became famous outside Japan for her role in "Battle Royale" (2000), where she performed the cold-hearted Mitsuko Souma; her acting career took off with this movie, and now she is well known in East Asia.

Her performance in the movie "Go" earned her several awards, among which the "Best Supporting Actress Award of Japanese Academy", the "Houchi Movie Award", the "Kinema Junpou Award".

In 2002, she started her singer career with her first single "Trust My Feelings", but her singing skills were first recognized with her second single "Tsuki no shizuku" (used for the movie "Yomigaeri"), which was one of the best J-Pop hits of 2003. Up until now, most of her singles had became the theme songs for various popular films, dramas, as well as commercials.

Her highly anticipated second album turned out to be quite a flop compared to her first album. It lasted only 9 weeks and had a peak position of #5 while her first album earned a peak position of #2 and spent 68 weeks on the Oricon charts.Shibasaki's third album "Kiki", which was released on April 25, reached number one on the first day of release.

Other than acting and singing, Shibasaki is also well received for her participation in commercials for numerous products such as Epson printers, Glico Pocky's, Daihatsu vehicles, as well as the mineral water from France - Volvic.

In 2005, Shibasaki's acting career took a turning point and she began to be taken more seriously as an actress. She appeared in the independent Japanese film, Maison de Himiko. In this film, she plays Saori, an unhappy young woman whose father is gay. Saori meets her father's boyfriend, and he urges her to come and meet her dying father at a place called Maison Do Himiko, a place where several aging gay men live together. Still angry that her father abandoned her and mother when she was young, Saori hesitates but agrees on the condition she will be paid handsomely working as a maid. The film opened in various Asian markets earning critical acclaim. With this role, Shibasaki cemented her place in Japanese film industry as a serious contender to lead.

In 2006, the young actress took the role as Dororo in the Japanese film, Dororo along with Satoshi Tsumabuki (her co-actor from the drama Orange Days. The film made a sensation in Japan, and became the top box office for nearly six weeks. Right after the filming of Dororo, Shibasaki participated in two more movies in 2007 including Maiko haaaan!!! and the sequel of Shaolin Soccer, Shaolin Girl, which is scheduled to be screened in 2008.

Shibasaki's first Christmas song, "actuality", was released in December 2006. "at home" was released later on February 21, 2007. Both failed to reach top 10 on the Oricon charts. "Hito Koi Meguri", released on March 28, 2007, reached number 8 on the charts. It became her first single to reach top 10 since "invitation". Currently, she had complete the filming of Shaolin Girl and is preparing for her live concert, the "Kou Shibasaki Premium Live" scheduled for August 3rd and 5th in Osaka and Tokyo.

jayokyo Jan 26 2010 10:09 am kou is an amazing actress, and always plays intresting role like in battle royale and one missed call !! brill xx

chencho c Oct 26 2009 11:40 pm I am very much pleased to watch the movies and TV series of this young actresss and ever since I have seen her on the screen,I have been always foud myself lost in the toughts.I wish that I can communicate with her personally,thats my wish and my dream.I wait for my dream to come true hahahaha...Best regards and may God bless you. Chencho Bhutan