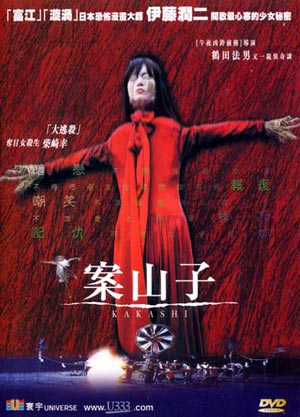 At the beginning of the film, there’s a brief explanation of the legend of how the ‘Kakashi’ came to exist: that in ancient times, Japanese farmers would burn human and animal hair, to keep away wild animals and evil spirits. This practice was known as ‘kagashi’. When it was later thought that burning effigies of humans would do the same thing, not only keeping out the undesirables but also attracting the gods down to earth, the effigies were named ‘kakashi’ in honour of the old tradition. However, as the legends would have it, the farmers were unaware that the gods they were attracting were pretty similar to the kind of spirits they were trying to keep away – unkind gods with no sympathy for humanity.

And so onto the central theme of the film, mainly concerning a young woman, Kaoru Yoshikawa (played by Maho Nonami), and her slightly weird relationship (well, is it just me or do they seem a bit overly close?!) with her brother, Tsuyoshi (Shunsuke Matsuoka). Tsuyoshi has been missing for a week, and the film opens with Kaoru searching Tsuyoshi’s Tokyo apartment for clues to his whereabouts. She finds a strange envelope next to his phone, which has a letter in it and some bits of straw: the letter is from an ex-schoolfriend of hers and an ex-girlfriend of Tsuyoshi’s, Izumi Miyamori (played delightfully by Kou Shibasaki, perhaps the only scary thing about Kakashi!). The letter itself is pretty odd: she begs Tsuyoshi to come and see her as she is afraid and needs help, and says (a quote which pops up throughout as the film’s obvious motto), “…is this a dream… or a fantasy?”