The Star of Prefecture Government 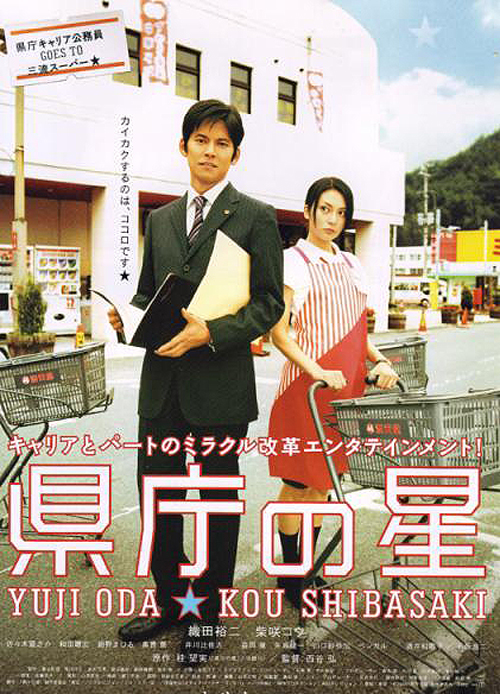 The hero, Satoru Nomura (Yuji Oda), is young, with most of a brilliant career still ahead of him, but has little feeling, save condescension, for the people he is supposed to serve.

Instead he has been slaving on a huge seaside development for the elderly that, if given the green light (or rather, the right hanko), will put him on the inside track to the top, where he knows he belongs. He is also preparing to marry the beautiful daughter of a construction company president who holds all the keys to the political and bureaucratic kingdoms.

Some of the locals, however, have been raising a rumpus about the project and, to keep the peace, the prefectural powers-that-be set up a sort of exchange program for elite young bureaucrats, who are dispatched to local businesses to observe, learn and even serve.

Nomura is sent to Mantendo, a third-rate supermarket sliding into oblivion. His trainer, Aki Ninomiya (Ko Shibasaki), is a hard-shelled part-timer in her mid-20s who takes an immediate dislike to him. Clearly, someone has made a mistake.

Rather than try to make nice with his new colleagues and customers, Nomura stays as rigid as the manuals he lives by. He knows better than these peasants, even though he knows nothing. Ninomiya, on the other hand, is a straightforward, down-to-earth type who kowtows to no one, not even Kencho-san (Nomura's moniker among the store employees, which translates as Mr. Prefectural Government). These two butt heads from day one -- and it soon becomes obvious the entire store agrees with Ninomiya: The new guy is a cross they have to bear and keep, as much as possible, out of the way.