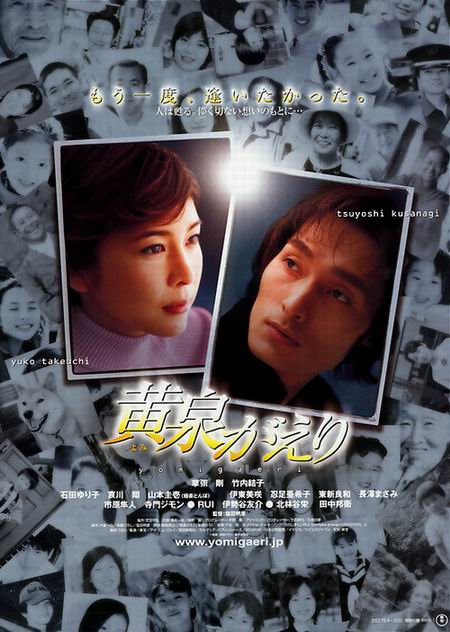 A boy who died during World War II turns up at the door of his now-ancient mother, looking the same, down to his burr haircut, as he did 58 years ago. Heita (Kusanagi), an elite bureaucrat for the Health, Labor and Welfare Ministry, is called in to investigate and is flummoxed by what he discovers. But when he discusses the case with Aoi (Yuko Takeuchi), a colleague and childhood friend, she is brusquely dismissive.

The number of cases keeps growing, however.

There is the elderly man whose wife resurrects several years after she died of cancer. He tells Heita he is glad to have someone to talk to again (and one suspects, wash his underwear). There is the couple running a ramen restaurant together -- and quietly falling in love -- when the woman's dead husband (Sho Aikawa) and the man's dead elder brother (Yoshikazu Toshin) appear. There is the teenage boy (Hayato Ichihara) who committed suicide to escape bullying from his classmates -- he shows up at his own funeral. There is Aoi's kindly therapist (Kunie Tanaka), whose deaf wife (Akiko Oshidari) died in childbirth -- and returns three decades later for an emotional reunion with her husband and daughter, now a teacher of the deaf.

Aoi becomes a believer, while longing for a resurrection of her own: Her fiance, a lanky surfer named Shunsuke (Yusuke Iseya), died just before they were to be married. Meanwhile, Heita, who was Shunsuke's close friend and has long loved Aoi from afar, has intensely conflicting feelings about Shunsuke's return. Knowing what he now knows about the resurrected, should he help -- or hinder?

Charles May 24 2010 12:25 am This is possibly one of my favourite Japanese movies. Not the quality of Kurosawa or many other Japanese directors and some of the acting is wooden but the story is fascinating and nice twist in the tail. No horror! No violence! Very emotional at times. Kusangagi is not the best of actors but Takeuchi shows he abilities, as she has done in many Japanese TV dramas. There are also some cameos from well known Japanese actors.