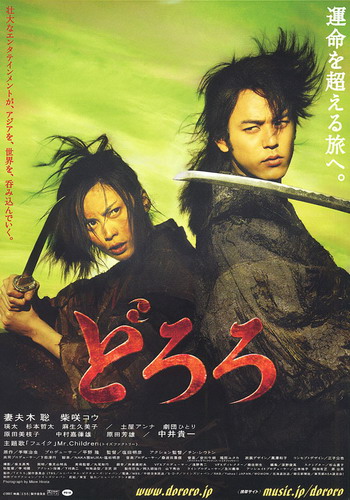 The hero, Hyakkimaru (Satoshi Tsumabuki) is a wandering "demon hunter" whose extra body parts -- 48 to be exact -- were grafted onto his head and trunk by a herb doctor (Yoshio Harada) who discovered him as an infant, in a process that echoes "Frankenstein" and "The Island of Dr. Moreau." His warlord father (Kiichi Nakai) gave the originals to 48 demons in exchange for power. When Hyakkimaru kills a demon, he wins back a body part.

He is spotted in one of these battles, with a giant spider demon, by Dororo (Kou Shibasaki), a scrappy female thief who is fascinated by not only Hyakkimaru's prowess with the sword blade poking out of his arm but the new leg he grows after dicing his opponent. Is he a man -- or a monster? After hearing his story from an old minstrel, she decides to join him on his travels and find out for herself.

Dororo dresses, talks and swaggers like a guy, but she obviously has more than a matey interest in this strange, fearsome but good-looking bionic warrior. It is an interest that she hides with a bluster that makes the grim-visaged Hyakkimaru smile. What really bonds them, however, are their various battles with demons. Dororo proves herself a fearless ally -- if one inclined to get into trouble at awkward moments. But Hyakkimaru decides he must go it alone when he finally encounters his most relentless enemy, his own father. Meanwhile, Dororo realizes that her pal is the son of the man who killed her father and left her an orphan. Is this end of a beautiful friendship? 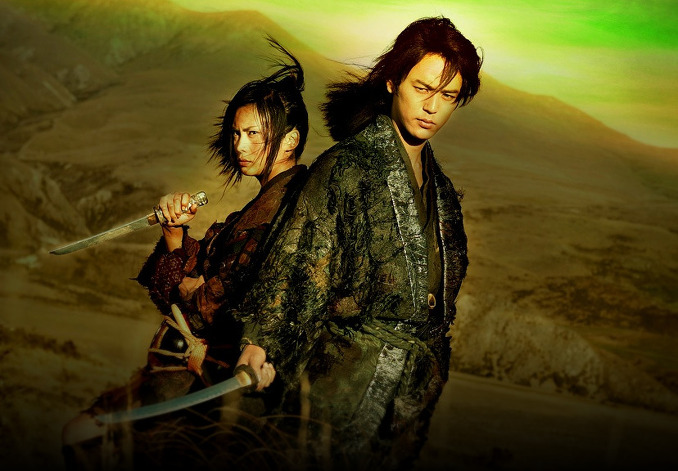 DororoFan Jan 27 2019 2:16 am Just watched the movie again but with english subtitles and at the end it sayed "see you in dororo 2 and 3!" was curious and googled for dororo2 but found nothing :( it is said that the 2nd one will be released since 2008 but we have 2019 and there is still nothing? damn its 11 years wtf i think its time to release it finally <.<

Btw the first movie is and will stay amazing! I cried so much of amazingness + its literally the first movie ive seen where the protagonists dont fell in love with each other, the movie is kinda more about friendship and family?

John Martin Mar 24 2016 11:08 pm Will there be a second movie where he gets back all his body parts? If yes please tell me where I may get this wonder and very ordinal.

mnbb Nov 17 2014 2:01 am Saw this on cable twice, past the first parts. Something about it just caught my attention. The dry, eerie atmosphere. The weirdest of story lines, but very original considering the current ones in circulation. The touching relationship between Dororo and Hyakkimaru reminds me of childhood friends who share in the fun unmindful of family backgrounds, and Hyakkimaru's perceptiveness and sensitivity is thoughtfully delivered in well-timed dialogues. All of these suggest something bigger—some penetrating grasp of human truth—beyond the material, meager in budget it might appear to be. I admire the way Japaneses films/stories are able to throw light into the complexity of humanity, the way Greek mythologies are able to do.

Anthony Sep 03 2013 2:12 pm if you mixed frankenstein with shakespeare, threw in a little power rangers and Zatoichi, you would have this movie which works quite well

Reply Feb 22 2010 9:26 pm I really thought this movie was very well done. I have never seen any Japanese action-fantasy-historical movies before. The action scenes are off the hook! (Ching Siu-tung! Action director of Shaolin Soccer, Hero, House of Flying Daggers) with samurai swords still kept to its originality. Great acting by Satoshi Tsumabuki. Kou (Dororo) did a good job keeping the humor throughout the movie.

Nalyah Jun 16 2009 11:03 am I liked the idea of this movie and the characters, however got a bit disappointed by the actual realization of the whole movie. They could work a bit more on the characters and details in the movie. The main female character was reeeeeeaaaally annoying, and that was probably the aim, however it was really overdone. Poor Hyakkimaru, having to drag that girl along with him... I'd personally drop dead, heh.