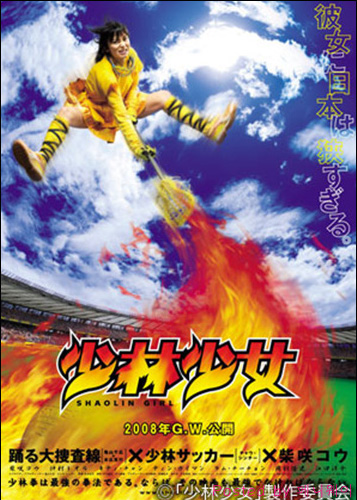 After harsh training in a Shaolin martial arts school, Lin returns home. She wishes to spread the art of Kung Fu, but her old master now works for a Chinese restaurant and her grandfather's gym closes down. One day, she learns lacrosse from her friend, Ming-ming, and she tries to integrate her martial arts into it. Meanwhile, a villain reaches out to Lin to take away her powers.

Ki Nov 15 2008 6:28 pm “Shaolin Girl” is a loose sequel to the brilliant 2001 Hong Kong comedy, “Shaolin Soccer.” Like a lot of Asian sequels in general, “Shaolin Girl” shares a common theme (fusion of martial arts & sports) with the original, but contains a completely different story line and with all new characters. This time around, Stephen Chow takes producer credit, while the rest of the film has a distinct Japanese flavor. The movie is helmed by Katsuyuki Motohiro, known for his “Bayside Shakedown” films and the hilarious “Summer Time Machines Blues” comedy. Unfortunately, quality wise, Motohiro’s “Shaolin Girl” is more on par with his disappointing 2006 film “Udon,” rather than “Summer Time Machine Blues.”

A fellow classmate, Kenji Iwai (Yosuke Eguchi), from her Japanese training days now runs a small restaurant somewhere in Japan. Rin pays Kenji a visit to gauge his interest in Shaolin Kung-fu. Kenji quickly tells Rin that his days of martial arts is over, but Rin finds an interested party in Minmin (Kitty Zhang Yuqi), a waitress at Kenji’s restaurant. When Minmin notices Rin’s incredible talents she asks Rin to join her college Lacrosse team. Rin hoping to find a useful avenue for her Shaolin Kung-fu talents joins the team.

Besides supporting role appearances by Chi Chung Lam & Kai Man Tin from “Shaolin Soccer,” you won’t find many similarities with the original. Perhaps due to Katsuyuki Motohiro’s pedigree from the Fuji TV world, you’ll notice the movie has more of colorful Fuji TV series feel, albeit with a souped up budget. The first half of “Shaolin Girl” is definitely the movie’s stronger half, running with the “Martial Arts meets Lacrosse” theme laid out in the movie’s promotional endeavors. Early on, you get the feeling that this movie won’t be on the level of “Ping Pong” or “Shaolin Soccer,” but there’s still the promise of an entertaining sports film. Kou Shibasaki does her part, bringing charm to her Kung-Fu babe role, but she won’t make you forget Vicki Zhou or Cecilia Cheung from “Shaolin Soccer” anytime soon.

Once Shibasaki’s Rin character joins the collegiate lacrosse team, the movie hits its high point with amusing training scenes between Rin and her teammates. The movie then introduces the Japanese-centric theme of team vs. individualistic sports play. But no sooner than a blink of an eye, the movie forgets about this theme entirely (as well as the Lacrosse team) and heads straight into the world of watered down martial arts films. By this time you realize “Shaolin Girl” has a lot more in common with the recent Korean film “My Might Princess” than Stephen Chow’s “Shaolin Soccer.” And like “My Might Princess,” once the movie shifts gear into straight martial arts territory the movie loses whatever luster it had before hand.

Visually, the movie then provides well done eye candy with its wire action fight scenes, but its something we have seen more than enough times in much better action films. Inversely, the uniqueness of its “Lacrosse meets Kung-Fu” story becomes completely wasted and what you ultimately get is very hum-drum action film. Nice special f/x and a handful of amusing lacrosse scenes can’t save this movie from complete mediocrity.