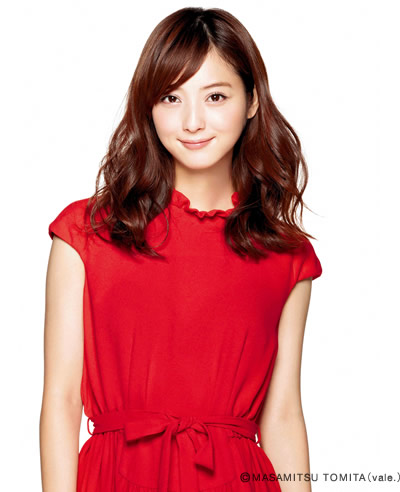 Nozomi was born and raised in Akita, and began fashion modeling in her teens. She entered the magazine scene in late 2000s after been discovered by a seasoned fashion model, Emi Suzuki, who introduced her on the Pinky fashion magazine in late 2007. This magazine, Pinky, was originally for Emi Suzuki, since it was created for the popular model, but Nozomi became its featured model especially after March 2008 when she landed alone on the cover.

After (essentially) quitting fashion modeling, she has been a gravure model, and occasional actress since 2008 when she played a role in the movie Handsome Suits.

She has also worked for the K-1 kickboxing league and the Dream mixed martial arts league since 2009, dealing with thousands of buff brutes from all over the world. She has even worked as a main announcer for K-1's new year's eve extravaganza "Dynamite!!" series since 2009.

She has released two singles, "Kamu to Funyan" and "Jin Jin Jingle Bell".

phikr1 Mar 17 2018 12:07 pm @Jerixsuzuki the only role i can remember where she would wear an eye patch is in Fu-Zoku Changed My Life but im not sure, been long time since ive seen that movie

Jerixsuzuki Aug 24 2017 9:42 pm Hey guys! Please help me find the name of the movie that nozomi sasaki has an eyepatch and a camera. Please help me guys thanks!

GeeGee Apr 04 2016 9:44 am You're incredibly gorgeous. Your smile was so cute! I had a girl crush for you. Anyway, nice acting on Rainy Days. That movie made me touched. Looking forward for your next movie. That's all. Thanks.

Akamba Evuna Michel Sep 01 2015 10:58 am Hello Nozomi Sasaki, i'm a fan from Cameroon. To me you are the most beautiful woman in the world . I LOVE YOU, i admire you and i respect you. Your singing is amazing,i love all your songs especially BELIEVE and DIAMOND DAYS.You will always be in my heart. TAKE CARE MY DEAR

ace Nov 24 2014 1:02 pm While I certainly agree that she is attractive, for me attractive women are dime a dozen in the entertainment field. No. It is her actual ability to emote on film that I respect. She actually has pretty good range when she gets the right role but I confess I'd like to see her in a full-on comic role. I first noticed her from My Rainy Days but I also watched a couple of dramas that she was in. She has not disappointed so far.

Cedrick Ian Jasper Jan 28 2014 4:25 am She is a fantastic girl who catches my heart. She can't get out off my mind. I can't explain it everytime I think of her. Nozomi this is my message for you : You are the dream girl of my life ! Take care always !

Alex Cheddar Oct 21 2013 9:19 pm I not really into some sort of romance movie but after i just saw tenshi no koi i was just moved to find similar movies like it and nozomi sasaki is just so beautiful cant get her off my mind :)

Eric Sep 06 2013 10:58 pm Just finished watching rainy days during work and I cried. The movie is beautiful and really touched my heart. I never cried this way. Thank you for that movie It tell us you express your love to your love ones everyday as long as they're around. Now i love nozomi! aisteru!

john mccrudden Jul 13 2013 6:20 am love you nozomi happy to see your career going so well good luck in future

van Jan 23 2013 4:21 pm "My Rainy Days" really a nice film i loved it.To nozomi its amazing how you act so cute effortlessly but you seriously can act, so don't join AV alright. Not that I'm against AV idols its just that we all grow old someday and have family how do someone from AV idols gonna suppose to say their kids someday about their jobs. I don't think telling them porn is OK is the right thing.Its really painful even if I'm just trying to imagine it. Just trust your heart,current research shows that hearts have neurons the one found in the brain so it thinks too.Brain really does not dictate the heart it's communicating it...( mabuhay).!!!!

Saif Aug 18 2011 7:30 am I Love Nozomi Sasaki more than my life.She is so cute & beauty that i fall in love with her at first sight.Tenshi no Koi( My Rainy Days) is a awesome movie.All the best Nozomi.