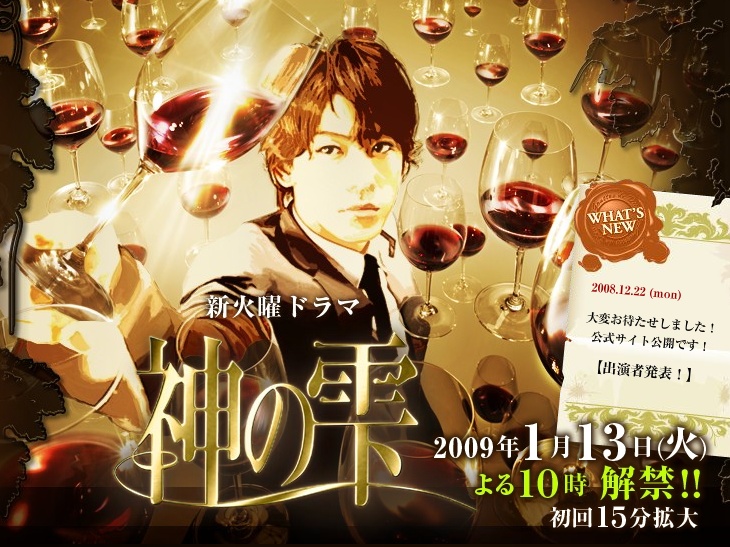 Two men compete in a fateful quest to solve a mystery in this thrilling human drama about wine. The story is based on a manga series of the same title in which the comic books sold more than 2 million copies in Japan and Korea ,and extended its popularity to France, the home of wine.

Shizuku (Kazuya Kamenashi) is the son of a world-renowned wine critic Yutaka Kanzaki (Ikko Furuya). Refusing to follow his father's path, he had become a salesman at a major beer company, only to find himself transferred to the newly-founded Wine Division at his company. Rumour has it that the transfer had to do with his father being a great critic, but Shizuku himself had been a rebellious son and had no interest in wine.

Suddenly his father Yutaka passes away, leaving a wine collection worth more than two billion yen (20 billion US$). According to his will, the son who guesses correctly all of the vintage years and names of the so-called "Apostles," 6 ultimate bottles of wine selected by Yutaka himself, plus the "Kami No Shizuku," in other words "The Drops of the Gods" - the rare wine that stands at the top of it all, shall inherit the whole collection.

A fierce competition begins as Issei Tomine (Seiichi Tanabe), a renowned somme-lier and wine critic reveals that he was adopted by Yutaka and steps forward into the battle for the priceless collection.

phoenix fire Nov 06 2014 3:27 am A wine-drinking, French-speaking Kamenashi?!? This was certainly a fun and informative drama. There were cutesy-cutesy moments but on the whole, I enjoyed the whole show. :)