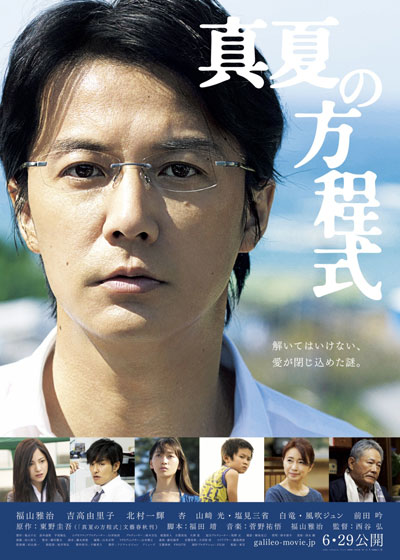 Manabu Yukawa (Masaharu Fukuyama) is invited for a presentation on Submarine Mineral Resources Development in Harigaura. He stays at an inn. Manabu meets Kyohei who came to the inn, which is run by his aunt's family, for summer vacation. The next morning, Tsukahara, who is another guest at the inn, is found dead on the bank of a port. Manabu becomes involved in the case. 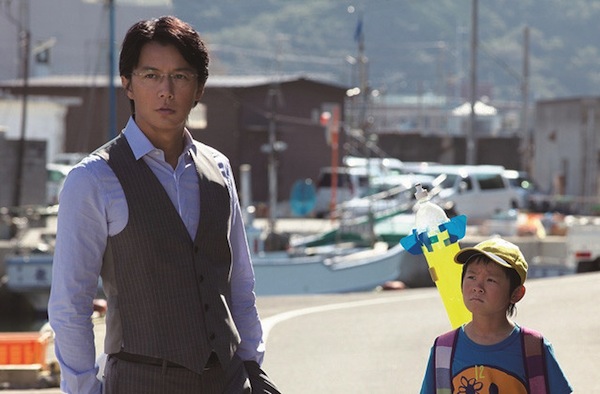 PASHA IVANOV Dec 09 2013 3:55 am A woman is stubbed to death crossing the bridge on a winter night. Another woman tells her daughter that they have a secret they will keep forever. Many years later a murder occurs in a quiet Inn on the ocean side. Are two murders connected? It’s up to professor Gallileo to find out.

A MIDSUMMER EQUATION is based on the fourth in the series of novels by Keigo Higashino featuring professor of physics Manabu Yakawa (AKA GALLILEO). Unlike many mystery writers Higashino takes the focus off “who-dun-it” to “how it was done”. All his novels a praised for an original twist that was worth to look forward while reading the book. A MIDSUMMER EQUATION has it’s twist. And the journey towards it is no less but remarkable.

At the heart of the story is a friendship between a middle aged professor of Physics who cannot stand children (he even gets hives around them) and a little boy, who is surprisingly insightful into the details of a murder mystery of the guest who stayed at the INN owned by his Aunt and Uncle. The friendship between the two is an unlikely occurrence in the age of phobia we live in and the key feel good string of the movie.

It is typical for Higashino villains to be the ones who actually need help and protection and A MIDSUMMER EQUATION is no different. The films main focus is on family values, self sacrifice and bonds shared by a parent and a child. But it is also has a sense of a place, an atmosphere of never ending summer and the innocence of childhood. This innocence in A MIDSUMMER EQUATION is preserved at a greater cost.

There are a few good performances in the movie and it has a well measured pace, with the exception of the ending, that over explains everything (come on, I had been watching this for two hours, I had seen murder mysteries before and don’t need to be spoon fed).

The truly satisfying experience in the movies is rare these days, and A MIDSUMMER EQUATION is a great effort to make you feel good about the times and the world we live in. Maybe a little overdramatic, it hits the mark with the statement that true loyalty does not come without a price.