The Story of the First King's Four Gods 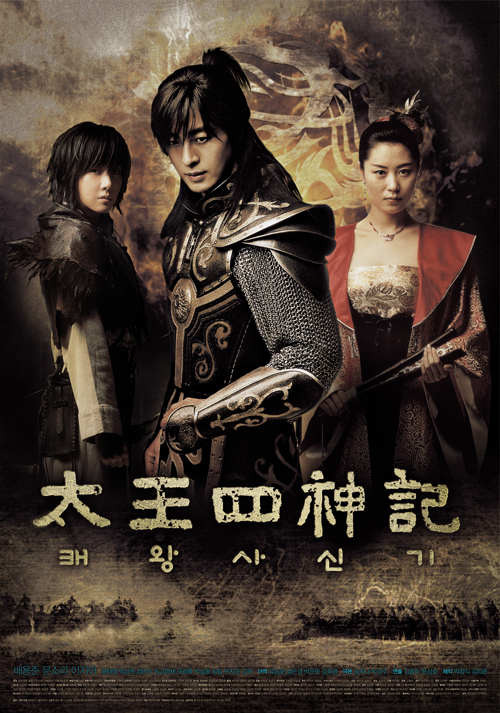 Hwan-ung, the Son of God, descends to earth and builds a country called Jyusin. Before the founding of Jyusin, there existed the Tiger Tribe, which worships a tiger, and the Bear Tribe, which workshops a bear. Ga-jin, a member of the savage Tiger Tribe who continues to harass Hwan-ung, and Sae-oh, a member of the Bear Tribe who falls in love with Hwan-ung, are both Jujak, or gods of fire. However, the three form a love triangle. Mad with jealousy, Ga-jin throws the child of Sae-oh and Hwan-ung from a cliff. Blinded by grief and rage at the loss of her child, Sae-oh sets the world ablaze. Hwan-ung ultimately kills his love, Sae-oh, to save the world. Ga-jin also kills herself atop a cliff, and the tragic love story of the three comes to an end. Later, Hwan-ung imprisons his followers—Baekho (White Tiger), Cheongnyong (Blue Dragon), Hyeonmu (Black Turtle), and Jujak (Phoenix)—in objects and foretells of a new king who will rule Jyusin who will be born on the day the stars of Jyusin light the sky thousands of years later. He then returns to the heavens after ordering these four gods to awake at the right time and aid the king of Jyusin.

Thousands of years later, the stars of Jyusin light up the sky and a son is born to each of the Royal family and the Yeon family, the highest noble family of the Goguryeo Kingdom. The Crown Prince Dam-deok pretends to be weak and slow from childhood because of people’s attempts to harm him. Leading a lonely life in the palace, Dam-deok befriends Gi-ha, a female priest from the Hwacheon Group, and Yeon Ho-gae, who was born on the same day as Dam-deok.

Yeon Ho-gae’s mother, who believes her son must be the king of Jyusin because he was born on the day the stars of Jyusin lit up, plots a conspiracy to poison the king. However, with the help of Gi-ha, Dam-deok exposes the conspiracy and Yeon Ho-gae’s mother kills herself. Yeon Ho-gae begins to hate Dam-deok as he learns that Gi-ha, who he had feelings for, loves Dam-deok and believes that Dam-deok is responsible for the death of his mother. While fighting the generals and noblemen of the Hwacheon Group, who try to make Yeon Ho-gae king, Dam-deok falls victim to a conspiracy. In the end, Dam-deok’s father is killed and Dam-deok, in the heat of a crisis, one by one discovers Hyeonmu, Jujak, Baekho and then Cheongnyong. Is it really possible for Dam-deok to become king as foretold by his destiny thousands of years ago?

run 3` Apr 15 2019 8:18 pm Very useful information particularly the last part, I care for such info a lot. I was seeking this certain info for a long time. Thank you and good luck.

wang Feb 23 2019 8:34 am To everyone disappointed, the producer actually had different plans but had to end it fast because of BYJ's injury at that time. The ending was actually supposed to have more context and better than the one actually made. So pls don't blame anyone that the director or producer made it bad

Maira Sep 29 2018 12:39 pm I just discovered BJY and I truly feel he’s a great actor. Loved him is this drama. I have seen two others with him Hotelier and Winter Sonata and in each drama I feel that he’s three different oeople. I just discovered the Korean culture about six months ago and have watched over 60 different dramas but he is the one. I am sad for me and other fans that he no longer acts. Congratulations BYJ on your second child. Sorry! That I wasnt born Korean because you would not me married to her. Love you and wishing you the best on your business endevours. I will ask heaven to be reborn Korean in my next life so i can be with you. Kiss! love your smile and lips!

Dee Aug 12 2018 8:19 pm I love saeguk since I was young, and I always prefer to watch saeguk than modern day kdramas. However I was running out of great saeguks to watch and most saeguk nowadays are so boring but fortunately I came across this! Omg, I love this. it's not perfect, but bae yong joon was the perfect actor as the king. PERFECT. he should act in saeguk more T.T. I hate fantasy themes, but I was hooked since episode 1. And I also tend to forward a lot since most kdramas (especially saeguk) are slow at times, but I hardly forward any episode which in itself is a great achievement. Bae yong joon and his character and the way he carried it was like something out of a manga drawing. He really should act in saeguk more. Really charismatic <3 The ending for the plot could have been better. would even be better if there was a scene where all 4 guardians/symbols had a fight. and the villain guy doesn't even make any sense. kiha is so annoying, like she can avoid so many dramas if she just learn to speak and communicate instead of crying all the time.

Jenny Jul 26 2018 4:56 am Did Damdeok ever loved Suzini? This is really heartbreaking in all ways?

Sitrat Apr 22 2018 1:53 am Who wrote such an incredibly beautiful story and ended it with a horribly? How can the four guardians just die because the king wasn't smart enough to realize their sacrifice and loyalty to him? Because of one evil woman? What happened to Sujini? Her love for the king and her loyalty to his cause? Very disappointing and leaves much to be desired about the writer. Seems the writer is a sadist really, otherwise the story wouldn't have ended horribly.

Carolina alvez Jun 25 2017 1:55 am Great movie but the ending was very disappointing. I love the role played by. Lee Ji Ah. Was there really a Sujini in the real life of Damdok? I was hoping that the movie will end with Damdok, the kid and Sujini being together. For Kiha, it was just unfortunate she was branded by the evil lord. I never get tired watching the movie over and over again. By congratulations to all cast.

Bebe Apr 27 2017 10:47 pm The story is great, although the ending was a little disappointing but I always re watch the drama from time to time. The only thing I wished for was a happy ending for Dam deok & Sujini.

Debbie Wurara Oct 18 2015 8:57 am This is my period k drama first love, for the story, to Bae Yong Joon,and the all. Until now I can't count how many times I watch this drama again and again .

rayleen Sep 22 2015 9:09 pm Awesome I loved it! Philip Lee, Great, the ending should have been better thou, will there be continuation?

LOVE Jul 18 2015 5:26 am one of the best movie shim eun kyung really did a great job in dis movie shes the real reason why i love dis movie shes even better dan the the main lead

Muhammad May 15 2015 1:15 pm Woah!!, its really an intriguing fantasy movie.I really love the trend of that movie expecially the legends about the symbols...I must say i'm proud of the producer and also characters of this movie..Its a welldone job..South korea rocks!!!

gaamatsu16 Apr 28 2015 9:30 am the best-est fantasy korean tv series i have ever watched. period. I dont mind staying up late watchings its episode. Its excellently done. Bravo!

March Apr 16 2015 3:31 pm I'm actually afraid to watch the last chapter, I don't want to see any of the characters that I love die (but I would sure like to see the end of that crazy, vampire like Hwacheon dude).

mercelyn furiscal Mar 04 2015 7:07 am wow! it's a great work of art tv series. but i'm a bit confused, the jushin king returned to the heavens to return the powers so that man can live by themselves and since he is the reincarnation of hwan-ung, therefore he is still the son of god. When he returned to the heavens, did he ever come back to earth to continue his rule? Or did he not? as the narration at the end of the series says, he died on the 23rd year of his reign. Acc. to the synopsis of the story he should return the powers and that humans could carry on by themselves. Having said that, he returned to the heavens, leaving behind his lover Sujini and son (who was bore by Kiha) on earth. Ahhhh, maybe he came back...

Esha Feb 09 2015 8:04 am I don't know the exact reason why I can't stop watching this drama for a moment! Seems to me like the story has been nailed in my heart ever since I started watching it! I'm just at episode 8, but every episode is making me amazed more and more. Bae Yong Joon is awesome! Hoping the ending will be great too! I recommend every Senguk drama lovers to watch it, period..!!

emma avenorgbo May 13 2014 4:01 am This drama was amazing to the full, the only part i got confuse was how sujini and kiha role were switch,she was the first phoenix after destorying the world i though she was going to play the same part but with a different ending,every thing fine apart from this part.

splendour Dec 30 2013 6:11 am I have only watched season 1,it's superb and now am filled with curiosity at what will happen in the end.

Davia Dec 03 2013 9:21 pm Wow! I just finished watching this and I am sitting here just spell bound. I don't know if words can really describe the beauty and immensity of this drama. This is one of the most amazing pieces of work I have ever seen. If this King was as wonderful as it is written here I would have loved to have met him. So many incredible characters in this drama. My gratitude to all that participated in creating such a thoughtful and touching drama.

Stephen Sep 01 2013 6:25 am Really interesting that one can't stop watching until one finishes it

Tee Mar 19 2013 2:34 am wow am realy impressed with this movie. Bae yong jun, Lee ji Ah and Philip Lee are most impressive. I wish them d very best. Am wondering y Bae Yong Jun isn't married yet, I hope he does dat soon b'cos time is not on his side anymore.

Bia Dec 07 2012 1:49 am ...my friend told me that is a really "must see". so, i tried. at first was hard for me to get caught in the action. and only actor/actress that i knew it well, was Lee Je-Ah, wich i saw it a year ago in "Beethoven Virus". from the 7 episode i got mesmerized. i don't enjoy the war drama, but the fantasy part is just perfect! for me this drama goes in gold category. cause is the kind of drama that will remain in my mind and soul even long time after the end... and now i have 2 more actors in my favorites list :)