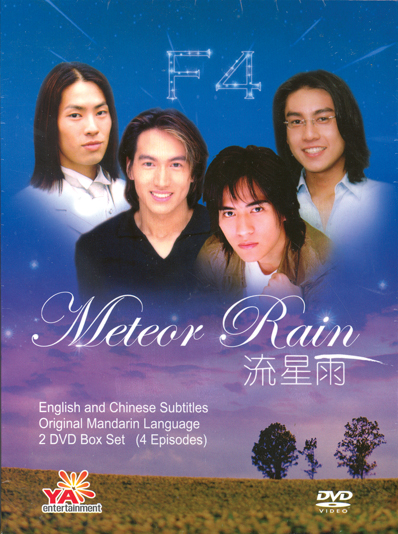 Mei Zuo's Chapter: Mei Zuo (known as Akira in the Japanese version) got his pocket picked by a Japanese girl, Ai Sha, struggling to survive in Taiwan. Ai Sha fools Mei Zuo several times before she finally reveals the truth. Ai Sha, recently left Japan to find her grandmother. Mei Zuo agrees to help her out and after several events take place, Ai Sha and Mei Zuo start to practice dancing together. The explanation for this is that Ai Sha believes the best way to find her grandmother is to enter/win a televised dance contest. At the end of this Meteor Rain Chapter, a romance is strongly hinted.

Xi Men's Chapter: Xiao You (known as Yuki in the Japanese version) comes back from Canada by herself on a quest for her love. She attempts to rekindle her relationship with Xi Men (known as Soujiro in the Japanese version) and at first seems to be unsuccessful. After an occurrence at the bar, Xi Men and Xiao You confront each other about their behaviors. Later Xi Men reveals to Xiao You a bit of his past and tells her about this girl, Xiao Geng, he once loved. Xiao Geng had discovered something very special, but he had been somewhat afraid of his feelings and had greatly disappointed her by not showing up. Inspired by the story, Xiao You goes on a time-consuming search for the "special thing" that Xiao Geng had wanted to show Xi Men.

Dao Ming Si's Chapter: There are two parts to this chapter. This chapter is arguably more relevant to the Meteor Garden series because it explains several scenes that took place in the first season of Meteor Garden. Dao Ming Si (known as Tsukasa in the Japanese version) is charged with a crime and flees from police. He narrowly escapes the police, jumps off a train and lies unconscious on a beach. A young girl by the name of Xin Xin finds him and Dao Ming Si is temporarily taken in by Ah Yuan, who appears to be Xin Xin's father. Ah Yuan and Xin Xin live in a simple shack by the beach and are not wealthy. There are several twists to this plot, the main one being that Xin Xin does not talk. Apparently Xin Xin is not mute; she was simply traumatized by something that happened to her in the past. Thanks to Xin Xin's advances, Dao Ming Si and Xin Xin quickly bond. However problems arise in the second part of this chapter, when Ah Yuan learns that Dao Ming Si is wanted by the police and Dao Ming Si learns the truth about Ah Yuan & Xin Xin's past. -- Wikipedia