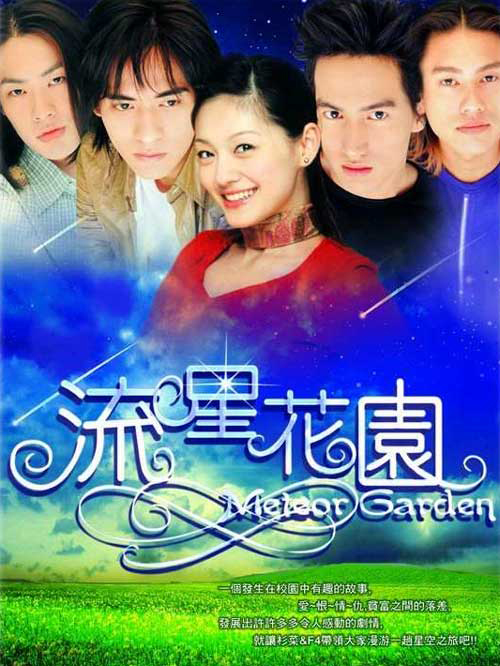 A poor teenage girl named Shan Cai attends Ying De University, a private school established exclusively for rich students. The university is dominated by a gang of handsome but arrogant students known as F4. Dai Ming is the F4 leader and the other members are Hua Ze Lei, Xi Men, and Mei Zuo - all of whom are heirs to the richest families in Taiwan.

Shan Cai then becomes the target of F4's Dao Ming's contempt. In the past no other students stood up to the F4, but Shan Cai does so. This in turn piques the interest of Dao Ming enough that he soon finds himself falling for Shan Cai. Meanwhile Shan Cai finds herself falling for another F4 member, the gentle Hua Ze Lei ...

Prim Dec 28 2017 4:16 am This is the legend of it all. The igniting factor of the dorama world. I am a huge japanese drama fan, but none will ever top Meteor Garden in my heart. This is my childhood. I remember running back home with my cousins (all tired and dirty from playing) whenever its 4pm and Meteor Garden is airing. I bought all kinds of posters and wallet-sized pictures of F4 and Shan Cai. Aaaaah~ Nostalgic! Even now, after 11 yrs and I'm already a professional, I watch episodes from time to time. Although the main story is from a japanese manga, it will always feel like Meteor Garden is the original one - for me.

krizamae15 May 23 2014 7:13 am Me too I love meteor garden,I'm very thankful because ived been watched this asianovelas this year 2014 I'm very addicted with the characters of meteor garden esp. Hua ze lei,I'll been watching meteor garden 3 times a day,searching it in youtube and also their concert in the philippines...ilove meteor garden.so muchhhhhhh

mau Jan 28 2014 5:20 am i miss this series so much, MG my first love, the first time i watched this decade ago i was in grade school now i had my degree and working already but still in love with this novel as well as all the character in the series. still searching for the latest new about f4 and barbie, hoping that someday i can meet them in person even when their older and got their family. and because i love the story so much i also watched the other version japanesse, korean and chinese but MG stay number 1 in my heart.

Akiko Jan 23 2012 9:06 am I remember getting addicted to this series and after watching the entire first season a for three days, finished the last episode just a few minutes ago, I'm vouch that I'm still hooked as the first time I watched the series a decade ago. Still the best IMO among the Hana Yori Dango adaptation.