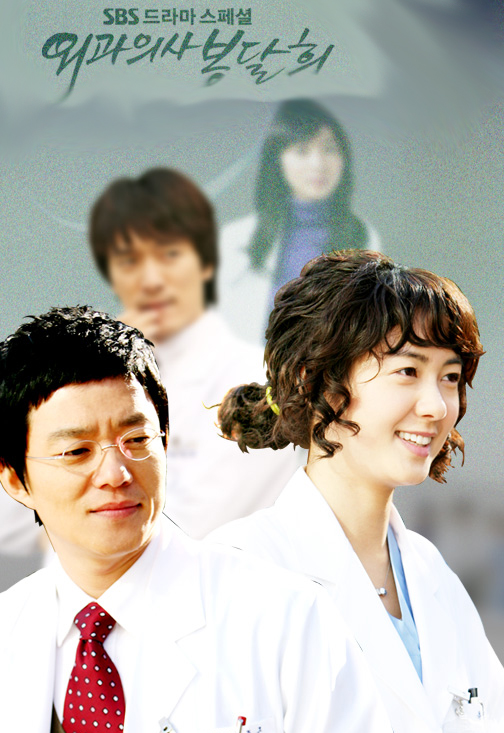 Dal-hee is a young doctor who graduated from a lesser-known medical school than her fellow doctors and suffers from a heart condition. She starts her first year of residency at the department of Thoracic and Cardiovascular Surgery and this TV series follows her trials at work. A medical TV series that follows the lives of young doctors who deal with setbacks, deaths, patients, and tensions on the job as they grow into full-fledged doctors! Set amid the surgery department of a hospital, this is story about love and marriage among four doctors – First year resident Dal-hee, Cardiothoracic surgeon Ahn Joong-geun, General surgeon Lee Gun-wook, and Pediatrician Cho Moon-gyeong.

Dal-hee(Lee Yo-Won) has had a frail health since she was a young girl and her condition made her want to become a doctor so that she could cure diseases. But in the first year of her residency, she undergoes a heart operation and this forces her to give up her dreams of ever becoming a doctor. She returns to her hometown where she finds work at a local public health clinic but she can not forget her lifelong dream. With little expectation, she applies for a residency at a general hospital in Seoul and she is accepted due to a shortfall of applicants. Finally, she is able to reach for her dreams again by starting her residency. But she has to complete the 100-day on-call duty in her first year and she tries harder than any other doctor to do her best but she keeps on making small mistakes that leads to serious complications for her patients. As Dal-hee overcomes the prejudices and misperceptions held against her by her peers, she finally gains the respect of her fellow doctors and completes her residency in three years. During those years, heart specialist Ahn Joong-geun(Lee Beom-Soo) and Dr. Lee Gun-wook(Kim Min-Joon) develop a rivalry at the hospital to become leading doctors and they also fall in love with Dal-hee. But Dal-hee’s health begins to deteriorate because of the grueling working hours at the hospital. She refuses to listen to the advice of her doctor and continues to work. Because of her health, she tries to take it easy at work but Joong-geun steps up the pressure when he finds her taking breaks. Dal-hee realizes that curing patients has made her life fulfilling and so she relies on her mental edge to keep her going at work but one day she collapses in the middle of an operation. That incident put her entire career on hold...

Summer Jul 30 2017 4:43 am It's already been 10yrs and I still love this medical drama. Have watch it for the nth time and never get tired of it. I miss the casts specially Dr.Ahn and Dr.Bong ❤️

Ranny Francisco Nov 16 2015 9:18 pm up until now, surgeon bong is one of my favorite dramas. i watched this a couple of years back but dr bong's acting still lingers in my memory. her expressions, looks and everything perfectly cut out for lee yo won. as milkyway said, lee yo won is very much underrated. and like you, milkyway, i llike her more than ha ji won and ha neul, too. she has very few films and dramas but most of them won her acting awards. hope she will have more assignments after she is no longer too busy with her role as mother to three kids.... good luck on all your endeavors.

tina Oct 15 2012 2:20 am Really love this film...great acting and love the actor..for surgeon bong two thumbs for your struggle to reach your dream..admiring dr.Anh :)

Tina Sep 07 2012 11:24 am Even It's Late to Watch, but, this drama sure made an extra-work, and it worth a lot of excellence in it. Compare to other drama in 2007, I'm sure this is one of the best drama in SBS, and for the actors and actresses in it. Sure Lee Bum Soo and Lee Yo Won made a chemistry and it's unforgettable. High Recommend to Watch !!

milkyway Jul 21 2012 8:49 pm This is such great drama in every aspect, the production, art direction, script, directing, and finally acting. Amazing drama, one of the best. Lee Yo Won act superbly, very natural and touching. She's such underrated actress, she hasn't got enough appreciation of all beautiful her works. Infact I think she's most talented, natural actress in South Korea. I think her acting is better and more natural than Ha Ji Won or Kim Ha Neul.