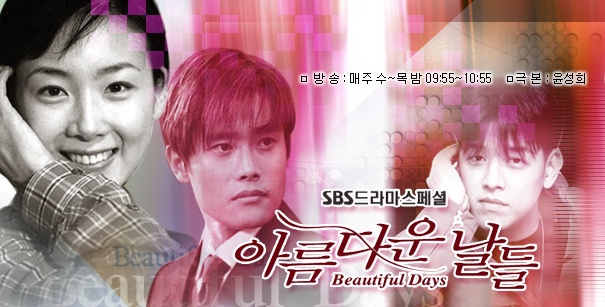 After Sun-Jae's (Ryu Si-Won) father died his mother Jang Myung-Ja (Lee Kyung-Jin) married Lee Jung-Choon (Lee Jung-Kil), who worked as an executive at Victory Records. Sun-Jae was disturbed by the whole situation. He believed his mother may have had an affair with his step-dad in the past. Furthermore, Sun-Jae also felt that his new siblings, Min-Chul (Lee Byung-Hun)& Min-Ji (Shin Min-A) despised him and their new mother. His new step-brother, is also an executive at Victory Records.

Yun-Soo (Choi Ji-Woo) and Se-Na (Lee Jung-Hyun) grew up together in a orphanage. They are not related, but relied on each other like real sisters. When Yun-Soo became of age to leave the orphanage, Yun-Soo promised Se-Na that she would meet her in Seoul, but an unexpected accident prevented her from fulfilling her promise.

Later they happened to meet again, but Se-Na still held resentment towards Yun-Soo. Yun-Soo worked at Victory Records, as a part-time employee, to earn money for her college tuition. Se-Na dreamed of becoming a singer, so she became a trainee at Victory Records. To make Se-Na's dream come true, Yun-Soo worked in Min-Chul's home to supervise his trouble-maker younger sister Min-Ji. As a condition for her work, Yun-Soo made Min-Chul promise to support Se-Na's music career.

Min-Chul is a competent and charismatic figure, but inside he feels loneliness. Min-Chul and Yun-Soo soon started to develope feelings for each other. Meanwhile, step-brother Sun-Jae was studying in medical school. Sun-Jae is a very gentle and pure person. He also carries a complex, because he was the son of a mistress and his siblings, Min-Chul and Min-Ji, looked down on him. Sun-Jae wanted to pursue music as well, but his step-father strongly opposed this idea. Nevertheless, Sun-Jae named himself Zero and introduced his music through the internet. Sun-Jae also came to love Yun-Soo.

Because of shocking past transgression committed by their father, Victory Records suddenly goes bankrupt and Sun-Jae's mother kills herself.

Min-Chul is now left with nothing and, in its aftermath, attempts to start his own company. Min-Chul also pushes Yun-Soo away, because he knows his step-brother Sun-Jae also loves Yun-Soo. Meanwhile, Yun-Soo becomes seriously ill, but does not let Min-Chul know of her condition. Only Sun-Jae is aware of her condition. Nevertheless, Min-Chul learns of Yun-Soo's condition. Min-Chul then marries Yun-Soo ...

thornnnn Mar 27 2019 2:57 am Truly one of the greatest of all time classics. One of the drama's that got the hallyu ball rolling. I didnt know there was a heavens trillogy. I saw in memories of beautiful days first, then stairway to heaven, then tree of heaven. The box this drama came in was the most elaborate beautiful box i have ever seen a box set of dvd's come in. Everything about this drama was outstanding. Amazing talent in front of and behind the screen. A long time ago a director fired Choi Ji-woo from a movie set cus "she couldn't act"! I think perhaps the director couldn't direct. This is a must watch groundbreaking drama.

Kdrama Jan 30 2019 7:57 am Lord have mercy... I came here after learning that this was one of three parts to director Lee Jang Soo's heaven trilogy. The other 2 are Stairway to Heaven and Tree of Heaven. After watching how those two ended I'm already preparing my heart for this one's ending. You guys should definitely check them out if you enjoyed this one. Bring it on Jang Soo! I don't know if I can take anymore heartbreak but I'm ready to cry... again. As if I haven't cried enough watching the other two. Let's hope I make it through in one piece!

pineapple Nov 02 2018 12:56 am Totally agree with Irt, i love Lee Byung Hun-ssi's performance since watched Mr Sunshine, and i love his performance in this drama as well.