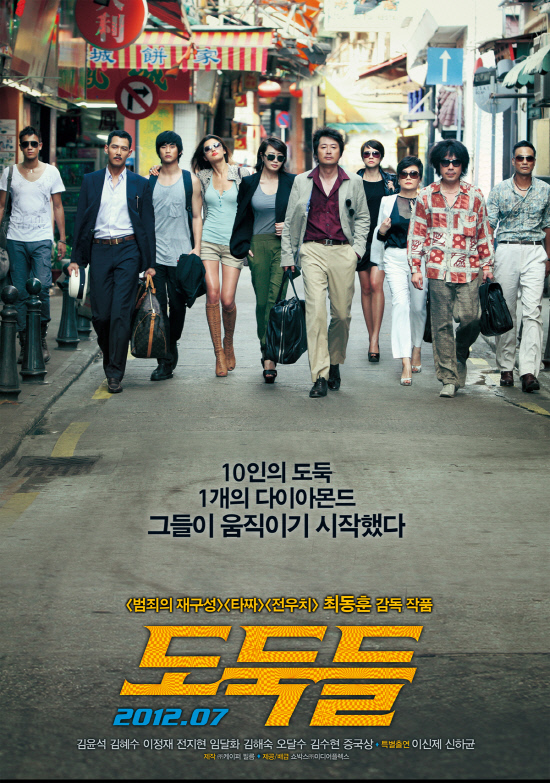 Popie (Lee Jung-Jae), Yenicall (Gianna Jun), Chewingum (Kim Hae-Sook) and Zampano (Kim Soo-Hyun) are a team of professional thieves in South Korea. After they score a valuable antique vase, they hear from Macao Park (Kim Yun-Seok) in which he proposes a highly lucrative new job in Macau. Meanwhile, Pepsee (Kim Hye-Soo) is released from prison on a special pardon.

A few years back Macao Park, Pepsee and Popie worked together as a crew. Macao Park and Pepsee were also in a romantic relationship. Then, while stealing gold bars, Macao Park's cable snapped in a elevator shaft and he disappeared with the gold bars. Pepsee was arrested shortly afterwards.

Now, Popie, Yenicall, Chewinggum and Zampano head off to Hong Kong to work with Macao Park. What Macao Park doesn't know is that Pepsee is also coming with them.

In Hong Kong, a separate crew awaits for the Korean thieves. The four Hong Kong thieves consists of Chen (Simon Yam), Andrew (Oh Dal-Su), Julie (Angelica Lee) and Johnny (Kwok Cheung Tsang). When the Hong Kong and Korean teams finally meet, tension rises immediately between the two groups. Macao Park then enters the meeting and lays out the plan. Their goal is to steal the "Tear of Sun" diamond. The diamond itself is currently in the possession of ruthless criminal Wei Yong. Furthermore, the diamond is stashed safely in the suite room of a Macau casino & resort. Macao Park also lays another bombshell. He can easily sell the "Tear of Sun" diamond for $20 million dollars.

Now the two teams work together in what will surely turn out to be the heist of their lives, but the 10 thieves all have their own agendas. 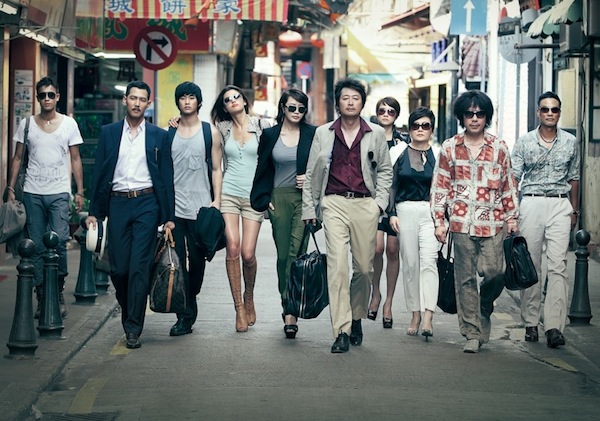 DafuqBoom May 24 2020 9:23 pm This movie is gorgeous. I didn't see the time pass by as I've been watching the movie. Almost every scene is atleast great, and a few are really amazing. Movie is pretty original despite the plot brief that may seem familiar. A lot of attention to details. And the action scenes - they're just flawless. Nothing was dragging, no questions left after watching and kind of a satisfaction after watching. This movie completely crushes Ocean, Now You See me and all this kind of movies. The only problem I had with the movie was pacing. There were so much good stuff that I really wanted to stop somewhere to comprehend it, and boom, theres another one in seconds. I'd really wish this movie would be the same just like 20-30 minutes longer for a bit less rushed pacing. Anyway, 11/10. Totally rewatching it.

FunnyCatsLover77 May 05 2020 2:03 am Nice 2 hour 15 minute movie. Really worth watching. Do not read any spoilers, because the movie has lots of unexpected twists.

The action scenes especially when Macao was chased was a bit unrealistic eventough its pretty common in action movies like this. I mean, how the hell do those young professional skillful thugs with rifles and complete gear cannot chase this gunless unarmed old man for long periods of time. After a while of watching I got bored about that. The first half of the movie is pretty good though. All the action scenes really made the thugs, polices, and SWAT members very very unrealistically skilless. Thats the only downside.

And, for closing, the real bad guy did not die in this movie, so don't get your hopes up.

cathy Jun 26 2018 4:12 pm I love this movie!!! The action part was spectacular! Everyone is amazing doing their parts. I need more Pepsi and Macau ㅠㅠㅠ I'm so cliffhanged on their story. this movie reminds me of ocean's 12, I enjoyed it! 10/10

whelp, goes back to watching YWCFTS for the third time.....

For all those who are wondering what happened to Zampano, it is heavily implied that he was sent to jail for his stunt at the casino; but Yenicall never got over him (the scene in the van where she is sad even though she "won") and will not rebuff his advances as much when he eventually gets out in a couple of years (similar to how Pepsee got out for parole and reunited with Popie).

Hieu May 05 2015 3:47 pm I was quite impress with "The Thieves" due to the lay out of the plot and the way they illustrated the unique personalities of each of the character. Though the movie is considered as an Crime/Action movie, there were plenty of scenes where it was both comical and heartfelt. What set this apart from other movies is the ability for the movie to turn a serious scene into a comical one, where you would see characters like Kim Hye and Lee Jung joking around while they are conducting a heist. This movie is packed with tons of actions. Throughout the movie, you'll characters like Kim Yun jumping over buildings and man handling some of the folks he fought with.The variety of emotions that i get from this movie led me on a roller coaster ride from the beginning until the end, where i would feel thrilled at some instances and pensive at others.Many of the viewers relate this movie to that of "Ocean 11," so if you enjoyed Ocean 11, I'm sure you will be amaze at this one too. Overall, the plot and the casts in this movie are very solid and its definitely a must see!

ace Jan 28 2015 4:14 am In regards to queries about Zampano, I gathered that he simply was arrested. After his arrest he disappears from the story. Given the fatalities involved on both sides during the caper I expect that he will be put away for a while.

Secondly, for me it was Chen and Chewing Gum that stole the show.

Third, I'd like to see a sequel but only if we find out Chen and Chewing Gum are not dead.

pseudokorean Jun 08 2014 9:42 pm the movie was great.. as in AWESOME !! > but little bit confused about what happened to zampano? did they end up being together with yennical?? did they lived as thieves in the end or abandoned being thieves? so many questions! I think it needs part 2.

NikkiMarooMalik May 16 2014 7:28 pm This movie is beyond AWESOME.. Its like lupin the third with a twist.. Like how the character played their roles.. Zampano and Yenicall are cute .. Im a big fan of the two of them after i watched my love from another star.. They always have that chemistry... :)

some1youknow Jun 10 2013 1:03 pm @jug its probably just a simple fashion quartz watch, by fashion watch i meant like fashion/clothing designer brand not from a high end or luxury watch manufacturer....the reason i said that because the watch has ''the unusual protective slide front case'' which probably has no real use and it is prone to be broken if not careful (and not many luxury manufacturer care about the front case since saphire glass is already durable enough to protect the watch)...its dumb to make extra front case for wrist watch (unless its only for fashion reason) because its not pocket watch which can fall from your pocket and break the glass if theres no protective case.

Bro May 12 2013 1:03 am I agree with one of the earlier comments. *spoiler*. My only complaint about this movie is what happened with Johnny and Zampano after they got captured. Everybody else pretty much had a definitive ending.

I expect this version will be better anyways as I generally enjoy Korean shows more for some reason.

I'm mainly interested in this for Kim Soo-Hyun, as he's done good work in other stuff.

I watched this movie last night and very satisfied. There are a lot of funny moments that cracked my laugh out and the action scene also over the top. Love the camera works on the wall-fighting scene. I also like there are so many twist, even though the twist is a little bit cliche. My complain is the duration, I think it's too long and there are some necessary scene. Also, they don't explain the end of Zampano and Johnny character... do they seriously just being caught like that and there is no one intend to save them? Well, overall is a good and entertaining movie... =D

Ki Aug 27 2012 12:05 am I've watched "The Thieves" multiple times here in Korea and every time came away really impressed with the film. Story works well and diverges quite a bit from "Oceans 11" by somewhere in the 30 minute to 60 minute mark. Some of the action scenes also kick ass, especially with Kim Yun-Seok climbing and flying on buildings as well as Gianna Jun (Jun Ji-Hyun). Three performers stand out for me in the film - even though everybody did a good job. Kim Yun-Seok's action scenes looked great! Gianna Jun had her best role since "My Sassy Girl". She looked fantastic and performed just as well. Lastly Kim Soo-Hyun provided for a lot of funny/cute scenes that seemed to give the movie a bolt of energy whenever a possible lull in the action seemed lurking in the corner. Like most people know by now, "The Thieves" has sold a ton of tickets here in South Korea and this is largely due to the great ensemble cast plus stellar work by the staff. I'm already hoping for a "The Thieves 2" !