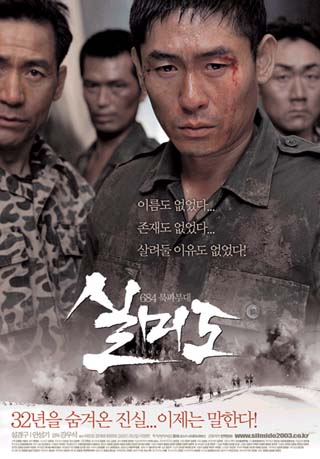 January 1968, 31 members of North Korean Special Unit 124 infiltrated South Korea with the ultimate mission of attacking the Blue House (Presidential Palace in Korea) and assassinating President PARK Chung-hee. When KIM Shin-jo, the only member who was captured alive, was asked "What was the purpose of infiltration?" on a live TV program, he shouted "I came to slit the throat of President PARK Chung-hee!" and made the whole country's blood run cold.

At the same time, In-chan escapes the death penalty for being an accessory to a crime when he accepts an unexpected proposal from Jae-hyun, a general at Silmido H.I.D. Project and is transported to Silmido Special Unit. Silmido Special Unit is a unit composed of dysfunctional social outcasts and criminals under the death or life sentences. Sang-pil and Won-hee are also among the members of this unit. When they arrive at the island, Jae-hyun gives them the classified national duty, which is to explode the North Korean presidential palace and behead KIM Il-sung, the North Korean president. It is a retaliatory project.

To its all 31 members, it is the ultimate patriotic mission with pride and loyalty; and it is the only chance they have to start a new life that is promised once the mission is successfully accomplished. With their hopes and promising vision, they survive through the most hellish inhumane 'killing' training and are reborn as human armories. They are the human killing machines, with strong comradeship and respect for each other.

Finally, the day arrives and they receive an order from the head office to carry out the mission. With their supreme confidence, they depart for the North. However, the project is suddenly revoked and they return to Silmido with much discouragement and stress. After then, the hellish training continues but, there is no more mission. The psychological frustration and physical tolerance start to reach their limits. And soon, the members start to lose their focus and unity. In order to regain complete control of the unit, the head office performs public executions of its own members. Meanwhile in 1970, with growing nationwide peacemaking movement between the North and the South, the government quickly decides to demolish Silmido Special Unit and executes all its members...

Kristina Jan 11 2017 9:26 pm @rara you are soo correct ! I don't know why people don't watch and appreciate Korean movies ! Hey are the best but most of the people in the world like holloywood films which are so unrealistic and meaningless to the world. Those Hollywood films don't give a proper meaning nor doesn't give us the thrills such as in Korean ones! I'm a Sri Lankan and I highly appreciate what Koreans do but I can't seem to find why most of the people are obsessed on those Hollywood and Bollywood shitty productions. Some people just don't have the right taste.

rara Aug 26 2015 2:49 am @Dorin : yes i agree with you. i liked only hollywood movies to watch and underestimated korean movie, but now after watching many good korean movies, hollywood movies are mostly a joke, i mean they show technology etc, but korean prefer strong script,good plot and great casts.

Lee Aug 12 2013 8:36 am This movie was done very well and shows the truth about the type of underhanded tactics governments will use to cover up their lies, deceits, and trickery. Everyone should watch it.

iliekater Jun 28 2009 5:24 pm Very good movie . It is impressive the Koreans went on and created this film . It shows how cruel goverments may be in order to hide their own faults .