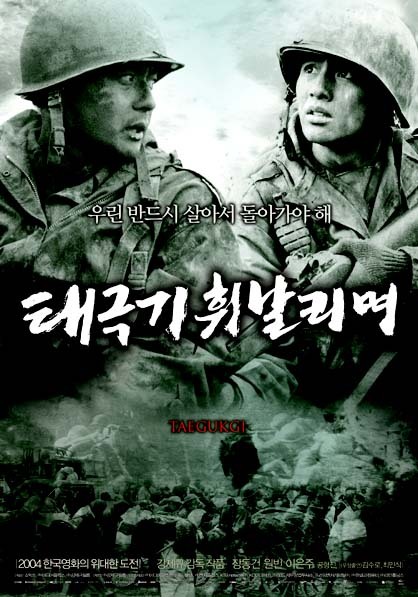 Jin-Tae (Jang Dong-Gun) and Jin-Seok (Won Bin) are brothers who are unwillingly drafted into the South Korean army following the outbreak of the Korean War in June 1950. Meanwhile, Jin-Tae's fiance Young-Shin (Lee Eun-Ju) joins the communist party to get food for the rest of her family.

Jin-Tae, the stronger of the two brothers, vows to keep his weaker younger brother Jin-Seok safe from any danger. After a military official promises to send Jin-Seok home if Jin-Tae wins a medal of honor, Jin-Tae begins to fight without fear ... 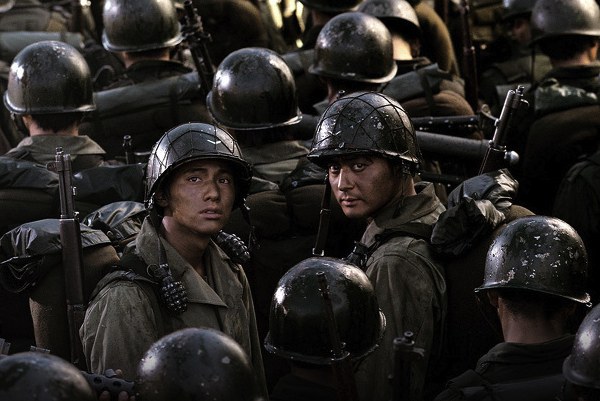 Just me Nov 23 2019 9:21 am The scene when they were refugees, and when the soldiers took them to the train, it feels so realistic.. i can even feel how scary that situation.. this movie so different among others war movies.. this is the best war movie ever, that can break your heart..

Lord Kikuchiyo Sep 19 2018 1:39 pm I remember watching this movie with my family when I was a kid, at that time when I don't even understand terms like communism or liberalism. I don't remember much of the story actually but I remember that I cried so hard, I literally wailed! Watching this movie again when I'm older, I can see why I can't simply forget this film. One of many things that differentiate this film from other war-films out there is how it successfully shows both sides of the conflict. And on top of that when your enemy is your own people that looks like you and speaks the same languages as you do (both South and North Koreans), just as depicted in this movie - the two brothers. It doesn't glorify war but it shows the ugly consequences of blind unchecked nationalism and the bitter end of those that follow it. 13 years later and the film still manage to tug my heart. It really is one the best war-films ever made in Korean film industry

Lucy Jan 23 2018 6:45 pm Saw this incredible film online, but unfortunately it had no subtitles. I'm slowlyyyy learning the Korean language so I'll buy Taegukgi and rewatch. I love all of the Korean war films and period pieces.

bbfool Jul 20 2017 12:24 pm This was a great movie. 2.5 hours long, so prepare yourself for that. I can see why it's one of Korea's legendary films. I cried my eyes out. Jang Dong Gun and Won Bin were fantastic in this movie!

dfgdfg Feb 13 2016 2:25 pm i try to watch this movie because it got some nice review.. but tbh after watching it, i feel a bit dissapointed. its not as good as the review says.

if its about war movie, then my fav movie would be "letter from iwojima" and "Nanjing ; city of life and death". and imo this movie is still far from that level.

Sara Aug 31 2015 8:42 pm This movie has literally been my favorite movie since 2 years ago... I'm sOooo in love with this movie.. one of the best movies eveeer .. the actors are all so amazing and cute at the same time!! I recommend u to watch this right now! Don't miss it

mxxln Jul 11 2015 2:29 am this movie was really the best war movie ive ever seen!!! the plot and the setting setted realistics. the genre isnt only action. but family most. affected how the old-young brothers protected each others

Aj Apr 26 2015 8:52 pm This is one of the best war films ever made; it is graphic, relentless, and heartbreaking as war is. Production, direction, acting, effects, etc. are all superb and can stand with any war film in the west. It is also very difficult to watch--because war is horrible, which the South Koreans make us look at rather than away from. No glory here, but heartache and pathos. Soldiers thrown into war by governments fight for one another, not for ideologies.

Edwin Aug 15 2014 1:55 am For real, I have never watched warfare movie like this.It is lovely and so realistic, I wish someone would tell me which one is at least almost this.

Excalibunny Nov 02 2013 11:20 am Just watched this. I've watched Jang Dong Gan's My Way prior to this and he unfortunately didn't survive both war films. Anyone who liked this should watch My Way; it is just as terrific as Taegukgi, if not better.

Sensei_h Nov 27 2011 4:52 pm At first I thought it was an average north&south war movie. But when Jin-Tae has joined the North, it had became interesting and tearful :'( It is really sad to see the 38th parallel is still hot!!! and it seems like it's gonna be like this forever :( how sad for them.

aphordite Jun 14 2011 12:35 am honestly......i'm not really like any war movies....but this turn my world over....!!!!! The movie its not about to killed many enemies,get such pride freedom,totally gun figth...!!!but trully about brotherhood loves

they fighted for protected each other....the older brother let him self to follow the war just for protected his yonger brother......only one thing on his mind just bring back home his yonger borother savely, dosn't care about anything at all.......!!!

Rainz May 22 2011 12:14 am One of the best Korean War movies I have ever seen, in fact one of the best Korean Movies I have ever seen, hands down. The brutality of War is simply shown in every way possible in this film. The idea of how loyalty can turn to vengeance and how joy can turn to fear is portrayed so well in this film. The acting was phenomenal as well. These types of films just go to show how lucky we are today as individuals. We have it so easy today, we should never take anything for granted. When you think your life has turned upside down, think of how these innocent men and women were forced into a war and how their lives were torn apart forever. Not just the Korean War, but any war.

Blaze Jan 11 2011 4:09 pm This was an amazing movie. In fact, it's my first time watching a Korean war film. I'm impressed by the well execution of the actors to delivers such emotional roles. The soundtrack is also very impressive!