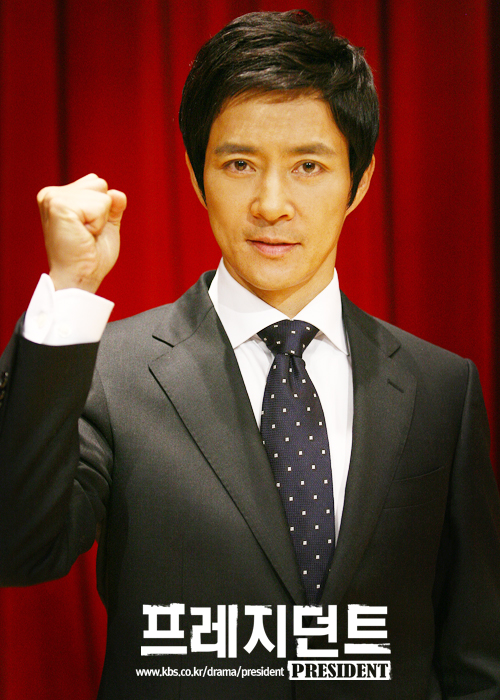 "President" follows Jang Il-Joon (Choi Soo-Jong) as he runs for the 18th presidential office in 2012 to actually winning the election.

Jang Il-Joon was born from an ordinary educator family, but graduated from a prestigious university as a law student. When the country was under military leadership, Jang Il-Joon was a student activist and became involved in a once-in-a-lifetime case. He dreamed to become the new dream for Korea.

Since then he has worked as a three term lawmaker and a human rights lawyer. Now, Jang Il-Joon throws his hat into the 2012 presidential election, dreaming to overcome conflicts between ideology, class, and regions with his leadership.

Pandora Browne Mar 06 2021 7:03 am Could of been a great drama. What father would not welcome his son. The mother overbearing. Yoo should of been able to have a relationship with their non biological daughter being they were not related. The ending fell flat.

jose aloisio soares Dec 28 2018 7:15 am The right title would be "The Candidate" because the plot takes place before the election period. Political intrigue, intrigues, family conflicts, betrayals, tips received by candidates, murders and forbidden love, are its ingredients. Script, photography satisfactory; but the cast ... The videographer focuses on the facial expressions of the actors, with many faces and mouths. It reminds of Mexican novels ... It did not go well with finalization. If you have something more interesting to watch ...

Megukin Dec 21 2017 8:36 am Just an add on to my last post. Is it Really conceivable that the ruling party as well as the others in the party, would turn away from and actively try to depose their own candidate? To do so ensures victory for the opposition. Does that make any sense except in drama land? All for what? Revenge? Finally, the actor playing the son is terrible!! Since this drama is 7 years old I hope he's improved, he can't get much worse. And what happened to the teenaged daughter? She's been mentioned once but not seen since the very early episodes. The only thing that kept me watching was who shot him and how long before the hillaryesque wife gets rid of the illegitimate son

Megukin Dec 20 2017 4:38 pm I'm trying so hard to slog through this drama on Netflix and it's getting painful. I'm only up to episode 10 and have to say this is without a doubt the most boring drama I've ever watched. It is sleep inducing dull. I'm tired of the lead actress' evil scheme face a dozen times an episode too. I just don't care about these characters. SO BORING

Paul Wrightsman May 07 2017 6:52 pm My wife and I just finished a marathon viewing of The President on NETFLIX. We found the plot to be very plausible, the characterization quite believable and the acting superb. Unfortunately, these are attributes that seem totally absent from the majority of Korean serialized dramas. Generally, writing is sloppy and dedicated to just dragging out the series to fill air space. Characters change personality at the spur of the moment; supposedly intelligent people make stupid devisions, just for the sake of adding additional episodes, and the final ending is filled with contrived sweetness and light. It's hard to believe that writers and staff are actually being paid for such blatant incompetence.

Whatever happened to the daughter? I swear they completely forgot about her. Her father gets shot, nearly dies, then goes to win the election amidst a lot of furor and she does not appear nor is she even mentioned again. They could have easily told the same story without her but she was introduced as a character so utterly dismissing her mid-story, without as much as an explanation, shows very lazy writing. I was glad that the romance was very toned down as it could easily have ruined what should primarily be a political themed story. But overall I wasn't all that impressed by this, Assembly was much better.

ty Mar 08 2015 8:25 pm one of the best korean drama,i hope i get to see continuation and see how president Jang will rule and handle his regimei enjoyed watching the show.

MyCo Feb 12 2011 5:27 pm Hey near the end of episode 7. The guy is walking back home by himself singing a song about "the sun will rise again tomorrow" Does anyone know the name of that song?

Hoho Momo Chan Dec 24 2010 6:24 am Woo hoo!! I love peanuts!! ©o©o©run©h is the best! You should try it too! It's good for health, especially for presidents. Aja-aja fighting!!! Yellow people eat noodles with no gravy! xD