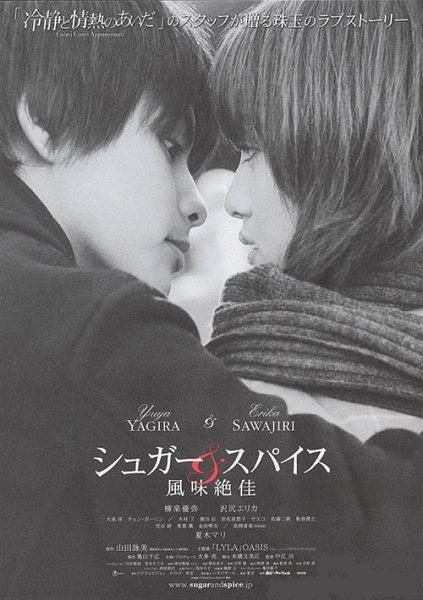 Shiro (Yuya Yagira) has graduated from high school, but he’s still not sure what he wants to do with his life. Shiro then makes the unusual decision to work at a gas station until he can figure out what he wants to do in life. Meanwhile, Shiro’s parents are firmly against his decision to work at the gas station, but Shiro has a secret weapon: his grandmother (Mari Natsuki).

At the gas station, Shiro meets Noriko (Erika Sawajiri) who also works at the gas station. As they become closer, Shiro realizes that he is in love. Problems soon occur when Noriko's ex-boyfriend enters the picture ...

mitzmin Aug 24 2009 6:17 pm To begin with, I found the film rather good. I mean, it is a bit tiring but, It can actually be a beautiful film. If you like films on which the end "teaches you a lesson" you will probably like Sugar and spice.

HK Neo Reviews Aug 06 2009 12:36 am All in all, Sugar and Spice is a beautiful piece of love story that goes the route not taken and for that it have resulted into an affecting work of realism. Perhaps it is the relating factors of the film that makes it better and far more interesting than Neo is complimenting, but nonetheless it is rare that one can sit through two hours without being bored. With all being said and putting Neo’s various bias factors aside, Sugar and Spice remains a beautiful film that have the ability to depict the beauty of finding the right person and the sugar and spice that goes along with it... after all, you cannot survive with candies alone…