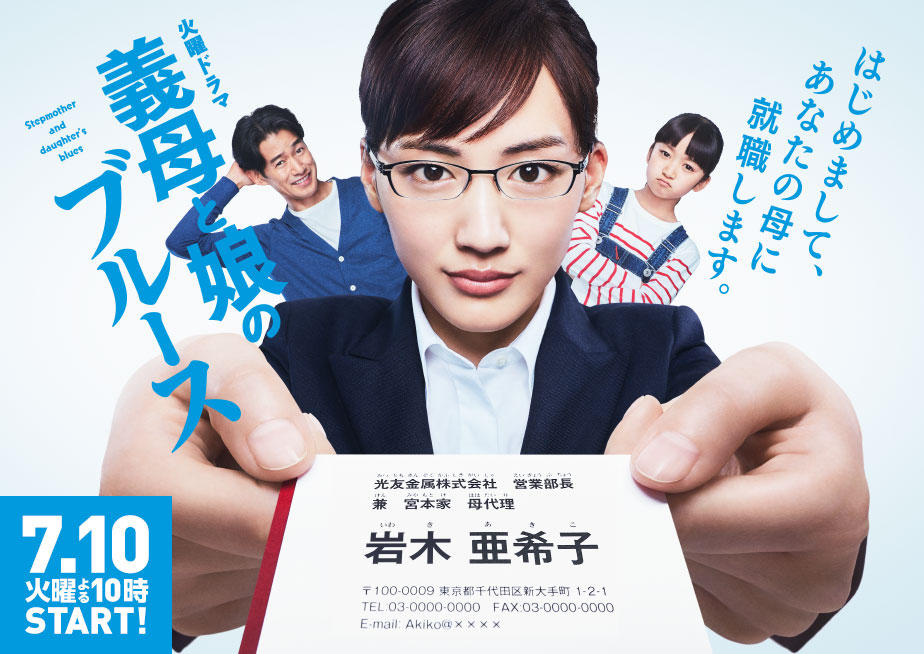 Akiko Iwaki (Haruka Ayase) is a career woman who works very hard at her job. She gets married to Ryoichi Miyamoto (Yutaka Takenouchi) who has a daughter. Akiko Iwaki must now deal with housework and raising her stepdaughter.

Dandahlian Apr 30 2020 7:42 am I'm halfway the drama and I'm really enjoying it. It's simple yet so heartwarming and easy to watch. I cried a lot in episode 4-6 lol I was spoiled but it made me cry harder lol so just a warning for crybabies, these episodes can really get so emotional. Not very heavy I guess, but it's still tearjerking for me. Anyway, everyone acts so well!! Takenouchi-san really did a great job portraying Ryouchi Miyamoto! Ayase-san is brilliant too ^-^ I really loved the children here, esp Miyuki and Hiroki. They're so cute. The soundtracks also make the drama more fun!! If you're in for a light and heartwarming family drama, I highly recommend this one! :)

rani Apr 20 2020 7:15 pm The first drama where I saw Ayase was in "Hotaru no Hikari" and next one is this drama. Funny how opposite her role is in this one. Showed me how great an actress she is. Contrary to what other people said them not enjoying much the first episode for me I enjoyed it which kept me wanting for more. This is such a heartwarming drama. Every one is good at the role they are playing.

Kobuta Apr 18 2020 3:58 pm I didn't like the 1st episode either but continued to watch thanks to the other comments. It was a good drama that made me laugh and cry. I preferred the small Mizuki to the older one. For Takeru Satoh's fan you just need to wait and he'll play an important part later ;) P.s. I love the song!

Putri Mar 09 2020 5:51 am I just realized that Sato Takeru worked with both sisters in different drama. What a coincidence! :)) *and he worked with the youngest first!

Kazuha-chan Jan 22 2020 1:36 pm I thought it would be a super boring drama, actually I was giving it a second chance because the first time I didn't last more than 10 mins... But I'm super glad I did, I love how they take the good parts in every single situation, it teaches you the importance of words, and speaking clear to others, I'ts a sumer hearwarming drama.

coconuttree Oct 09 2019 8:22 am it has a nice story line and it is very highly recommended to watch again. I love this story

Tory Dec 27 2018 8:18 am This series is so special to me. It made me keep switching from laughing to crying, and vice versa.

Frankly, I found the first episode kinda weird and not amusing much, but the more I watched the more I got absorbed.

All characters are lovable, and the cast including the child actors delivered a brilliant performance. J-drama sure never disappoints me.

dzeke Oct 13 2018 8:01 am if you can endure one or two first episodes, this drama is actually really good

Ralph Aug 20 2018 5:30 am My wife and I absolutely love this show. Does anyone know if the actors who play the older Miyuki and Hiroki are related to the younger actors? Their facial features and expressions are look the same. Especially Miyuki.

Stella Aug 16 2018 2:58 am The first episode was difficult to watch but it gets better as you continue. I especially love the girl who played the character for Miyuki. She's so cute~~!! Hopefully she and Hiroki can become a couple ahahhah... anticipating for the next episode!

Dan Marston Jul 13 2018 1:15 pm I saw some of it wednesday it isn't one of ayase's better dramas I loved last one caution hazardous wife

Desiree Lovely Jun 25 2018 3:27 pm Did she just try to hand her a business card???...lmaoo I'm wondering how the Dad and she met to even get married. Takenouchi is so older man hot.