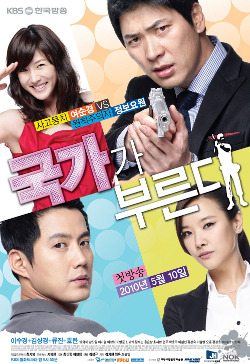 In the romantic-comedy "Secret Agent Miss Oh," lead actor Kim Sang-Kyung plays NIS (National Intelligence Service) agent Ko Jin-Hyeok. With Jin-Hyeok's background in the special forces he is perfectionist at work, but in his personal life he is mired with flaws. Lead actress Lee Soo-Kyung plays the highly unpredictable female police officer Oh Ha-Na. Ha-Na has a bright and lovely image. Meanwhile, actor Ryu Jin plays Han Do-Hoon. Do-Hoon was born into wealth, but his father announced that he is donating his fortune away. Because of this Do-Hoon turn to life a crime to gain wealth ...

dido Mar 11 2017 11:48 pm the story was okay..it would have been a better lovestory if oh ha-na and han do-hon end up together..ryu jin excelled well together with lee soo-kyung..they keep the story going..

Misled Jan 11 2016 10:26 pm Disagree with most of the positive comments, very boring after 10 episodes. It was just Ha Na hanging out with Vice Director. No forward movement of show, no relationships, no criminal caught or action. Just them two hanging out. No building of Go and Ha Na relationship. I do agree there were some comedic scenes. Not enough to rave. I will not watch again. Since I am fan of Lee Soo Kyung. She was great at her part.

Chick Mar 08 2014 8:34 pm One of my favorite dramas. Ryu Jin did such a great job playing this off the wall character. A few of the scenes gave me such belly laughs I thought I would split a gut. I love the dead pan expressions of Sang Kyung throughout. And Soo Kyung is great in anything she does. These people must have loved coming to work for this drama.

Hitori Dec 22 2013 4:15 am I honestly like and hate this drama. First, she is not qualified to become a secret agent because she has no ability whatsoever, but I felt like that was what made me kept watching because of the many dumb things that she said and did. I really really liked Ha Don Hoon character. The writers developed his character so much more than the main guy's character. I was very confused and did not see the love connection between Oh Ha Na and Ko Jin-Hyeok, it just wasn't there for me. On the other hand, like many would agree, Oh Ha Na and Ha Don Hoon's scenes were so sweet and funny. It was so sad when he found out who she really was, and I was really hoping that the drama would end with a twist that they would get together but, nope, she ended up with the Ko Jin Hyeok...sad story :(

Ronaldo Sep 28 2013 9:21 am I agree with most of the comments. first 3 episodes were kinda boring and mostly stupidity acts but from episode 4 on wards, it's really entertaining, interesting, cute and fun to watch particularly scenes of the suspect director being spy by the police officer.....

Davia Sep 05 2013 9:35 am Once again Lee Soo Kyun wows in this fun, endearing and exciting drama.. She not only is such a fun actress but also extremely versatile in the facets of character that she can portray in her various dramas. `

Also the various characters in this drama are really fun. I loved the in fighting between the three veterans of the NSA. The villains were engaging too. This is such a well put together drama.

Babs Sheppard Nov 23 2012 10:20 am I'm glad Oh Ha-Na ended up with Ko Jin-Hyeok , but he should have shown he was a more into her, and there should have been a kiss somewhere along the way.

sue Aug 15 2010 6:42 pm i really love this drama esp the character of Oh Ha Na and Han Doo Hoon, they really suits each other...so cute!that's why i'm a little bit frustrated with the ending. is it possible to have part 2? only this time Oh Ha Na will be with Han Doo Hoon!

i really love this drama it makes mi giggle LOL :)