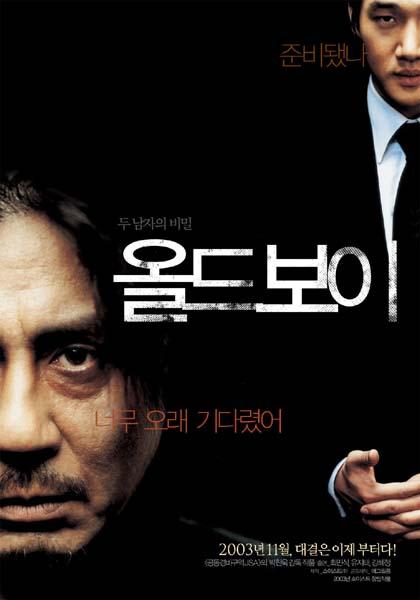 Oh Dae-su (Choi Min-Sik) is an ordinary Seoul businessman with a wife and little daughter who, after a drunken night on the town, is locked up in a strange, private “prison” for 15 years. No one will tell him why he is there and whom his jailer is, but he is kept in reasonably comfortable quarters and has a TV to keep him company. While watching TV, he discovers that he has been framed for his wife’s murder and realizes that, during one of the occasions in which he was knocked out with gas, someone has drawn blood from him and left it at the scene of the crime. The imprisonment lasts for fifteen years until Dae-Su finds himself unexpectedly deposited on a grass-covered high-rise rooftop.

Oh Dae-Su is determined to discover who his mysterious enemy is. He gets his first clue when a homeless man hands him a cell phone and a wallet full of cash. Later, while Dae-su is eating in a Japanese restaurant, the phone rings and a voice challenges him to find the reason for his imprisonment.

Dae-Su blacks out only to awaken in the apartment of the restaurant’s pretty, young waitress, Mido (Kang Hye-Jung). Mi-Do helps him search for his hidden prison, but one night, Dae-Su finds Mi-Do exchanging emails with a mysterious stranger who seems to know all about him. Convinced Mi-Do has betrayed him, he continues the search on his own.

Dae-Su locates his former prison and beats up the gangsters who served as his captors. A tape offers clues as to his enemy’s motives, but not his identity. Dae-Su blacks out on the street and after being helped into a cab by his mysterious, but still unnamed foe, he ends up back at Mi-Do’s. An old friend who owns a cyber café helps Dae-Su discover that Mi-Do’s emailer, “Evergreen”, is indeed the man who had him locked up. Dae-Su is enraged by Mi-Do’s apparent betrayal, but a face-to-face confrontation with his smooth-talking adversary ends with Dae-Su’s conviction that she is innocent. The man gives Dae-Su five days to discover who he is and why he imprisoned him. He is told that if he succeeds, the man will kill himself; if he does not, he will kill Mi-Do.

Final clues lead Dae-Su back to his old high school, where he discovers that his enemy is fellow graduate Lee Woo-Jin (Yoo Ji-Tae), whose sister, Soo-Ah (Yoon Jin-Seo), committed suicide years before. Dae-Su confronts Lee in his ultra-modern penthouse apartment, only to discover that his enemy’s tortures are just beginning. 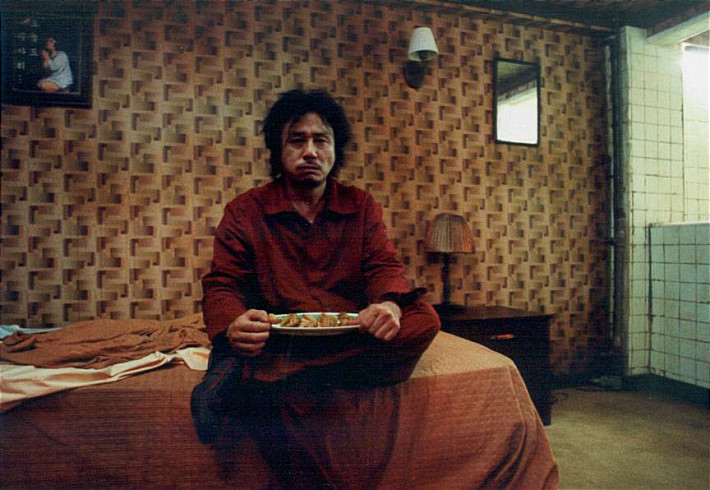 Oliveoyl Apr 04 2020 5:40 am I cringe many times after the truth revealed. Very disturbing and dark. 2 thumbs up movie, but I will not watch it for the 2nd times.

And oh, since I watch Hospital Playlist, this is so good to see young Yoo yeon seok here. Hmm..

suranga Nov 05 2015 11:01 pm This is the first korean movie i ever watched and this is the best shocking one.this movie take you to a another demention and prove how people can repay their revenge soo cruelty. highly recommend this if you have stomach to watch it...

Misa Apr 06 2014 12:02 am i have seen an hollywood adaptation for this movie and... we can't even compare them. this movie was so original, so full of vengeance and can't be replace with the other. the cast, the plot everything were just too perfect!

Lancideim Feb 22 2014 2:32 am Truly a...profound experience. Why it was on Fearnet is beyond me, but long story short it was a 2 hours well spent. These "Revenge Flick" thriller movies are usually hit or miss. This one hit the mark, dead-on.

kan8 Apr 09 2013 1:06 am With Respect to the Hard work And Good Job of The Cast,This is My Worst Movie Of All time.Why?...Just Because They Dared to Show Sex Between Siblings(Brother&Sister)No Need to Explain Why This is Absoloutely Wrong,But Just I Can Say That This is The Worst Scene That I Ever seen.Korean Cinema industry:U Must Not Be Like This And Allow These Corruption And Dirty Actions,Just Follow Korean Rich Culture Not American Lack of Culture

Yogessegoy Mar 06 2012 9:39 pm when i saw this First time i really shocked, hated very much after that, i don't know i started liking this movie like hell....This is the best movie i ever saw...

Hugo Dec 31 2011 7:37 am Very haunting, disturbing masterpiece... lost my mind for a day thinking about this