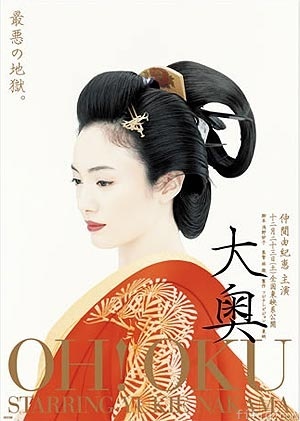 The year is Seitoku 2 (1712), and Japan has a new ruler. But Ietsugu, the 7th Tokugawa shogun, is only four years old. The power vacuum this creates has Edo Castle roiling in political intrigue and personal positioning of all kinds. One of Ietsugu's first acts is to employ a Noh actor, Akifusa Manabe, as his aide-de-camp, which naturally doesn't sit well with senior shogunal councilors. In the Oh-Oku inner palace, the woman who stands to lose the most influence and prestige is the deceased Shogun's wife, Ten'ei-in, for she is not Ietsugu's biological mother. That distinction goes to a beautiful young concubine, Gekkoin, whose usurpation of the Shogunate bloodline has earned her the animosity of Ten'ei-in and her following.

Fortunately, Gekkoin finds an ally in the recently promoted head matron of the inner palace, Ejima, a sagacious women of humble birth who takes pity on Gekkoin and endeavors to protect her from the storm of resentment that is brewing against her. When Ten'ei-in gets wind of a rumor of a secret romance between Gekkoin and Manabe, Gekkoin's only true ally before Ejima, the wheels of conspiracy are set in motion. While Ejima views Gekkoin's affair with Manabe as a terrible error in judgment, she vows to keep the romance a secret. But Ten'ei-in is already in league with disgruntled councilors to bring down Gekkoin and the infant ruler.

Ten'ei-in finds the leverage she's been looking for in Ejima. At a Kabuki play performance, Ejima finds herself reunited and subsequently enamored with a Kabuki actor, Goro Ikushima, who is not only strikingly handsome but proves himself chivalrous as well. Ejima and Ikushima strike up a forbidden romance of their own that burns so strongly, Ejima begins to grow careless. The palace erupts in scandal, largely orchestrated by Ten'ei-in, who is now in a position to force Ejima into a fateful choice between betraying Gekkoin and keeping the love of her life. The stage has been set for a tragic finale of Shakespearean proportions.

Clea Mar 06 2014 2:16 pm @niggah who the hell are you, India is more then amazing, already the one of the fastest growing economies, keep watching haters!

Iandalf Shimamura Dec 21 2011 7:21 am It is a bit strange. Why does this site only include Japanese, Korean, Chinese and Thai movies? Asia is a lot bigger than those four countries. India is in Asia and has one of the biggest movie industries in the world. Don't these people know their geography?