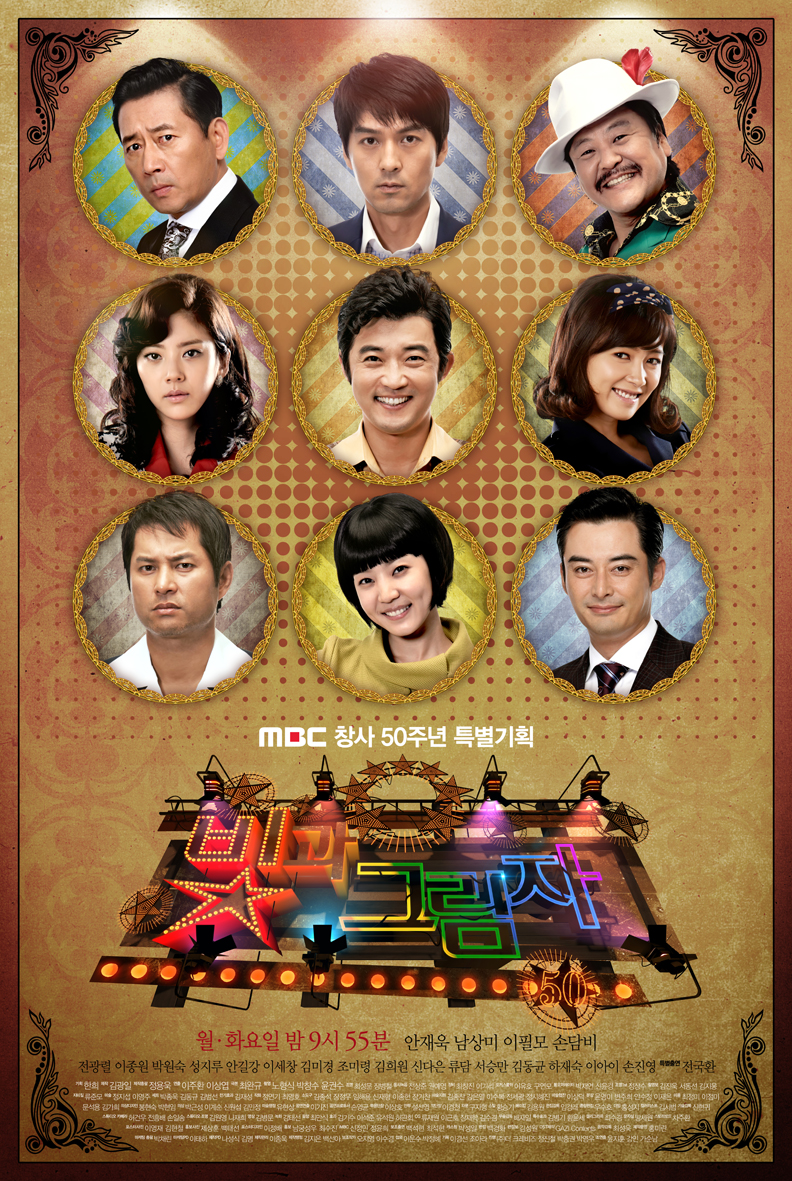 "Lights and Shadows" depicts the life of Kang Ki-Tae (Ahn Jae-Wook) - described as Korea's first entertainer. Kang Ki-Tae debuted at an American military base stage and worked in the show business during the 1960s. Storyline covers periods from the 1960s to the present day. Various historical incidents like the Vietnam War, May 16 military coup d'etat and the assassination of Korean President Park Chung-hee ......

Ki-Tae (Ahn Jae-Wook) is the son of the richest man in Soonyang. Ki-Tae works at a cinema, which is one of several businesses owned by his father, but Ki-Tae is more interested in having fun than work. Ki-Tae is just a troublemaker to his father. One day his father checks his account book and finds that some numbers are missing. Ki-Tae explains that he invested 10,000,000 won on making a movie to show in the cinema on Korean Thanksgiving Day. His father stipulates that this is the last chance for Ki-Tae.

Ki-Tae and his assistant goes to Seoul to check on the movie Ki-Tae invested in, but their main purpose is to play around in Seoul. On the first night in Seoul, Ki-Tae goes to a dance club to check out the college girls in the area. There, Ki-Tae bumps into his younger sister Myung-Hee. They agree not to tell their parents that they met in the club.

Ki-Tae's dilemma gets worse as he discovers all the movies are sold out for the holiday. Then, Soo-Hyuk (Lee Pil-Mo) is discharged from the army and comes to Soonyang. Soo-Hyuk's mother has worked at Ki-Tae's house for a long time as a maid. Soo-Hyuk is also smart enough to have graduated from a prestigious university, but, nevertheless, he has an inferiority complex due ot his poor background. Soo-Hyuk is then offered a job by politician Jang Chul-Hwan. Soo-Hyuk first met Jang Chul-Hwan for the first time after he was accepted into the best university and Jang Chul-Hwan presented to Soo-Hyuk his scholarship. Since than they kept in touch.

martin fennell Sep 27 2015 7:43 pm finished up to ep 54 Why isn't the girl who played sunduok, mentioned here. She is delightful, and gives a lovely natural performance. I don't think the lead actresss is very good. I didn't really care whether or not her kang kitae get together in the end or not. They don't have any great chemistry. I find her rather bland. But he is excellent. Jang Choliwan is a great villian. I love the facial expressions. But the scenes where he gets angry just have me laughing now. Shin Da Eun should have a bigger role. She is definetly the best actress, alomg with Kim Mi-Kyung. I also like Lee ah lee. Great sets, some very good songs. Great posters and photos. Some very funny dialogue. I find sung ji ru's performance rather tiresome. But still, I find his and jo mi ryung's relationship more interesting than the leads. but the show is really about what happens between Kang Kitae, and the 3 he's out to get revenge against. it scores high with me there.

Eugene Aug 12 2014 4:53 am I'm rewatching it right now. I must say that first I watched this because Ahn Jae Wook was in it. However, as the drama progressed, I was impressed by Lee Pil Mo's character. His character kept me up with the drama. Now I'm watching it again. The ending was sad with Soo Hyuk sacrificed his life to save Ki Tae then committed suicide.

Dawn Jan 23 2014 9:15 am I've got to give props to MBC America for re-running dramas that have previously aired....because I just became a subscriber to this cable channel since I've fallen in love with South Korean dramas, that being said....I love this drama. It's old to others but new to me and I will be watching every episode, I love that 70's vibe it's got going for it. I found myself saying, was this made in the 70's until I realized it was recently made (21st century, not 20th century...hahaha).

Anyways, it has captured my attention, so I hope MBC will show all episodes until its end.

Glen Salo May 09 2012 11:47 am Great TV drama -- best yet. Thank you for the captioned English translation. All the actors are great and the plot ever unfolds. FANTASTIC!