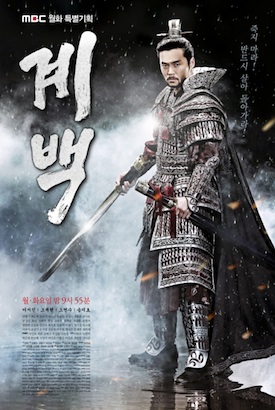 General Gye-Baek of Baekje and his 5,000 soldiers go up against the Silla and Tang Dynasties. Their combined forces are 10 times the size of Bekjae's army.

Trish Feb 21 2021 4:09 am I'm enjoying this drama knowing that in history it ended badly. Should I even watch the last episode? In a nutshell, last King of Baekje destroys 70 years of history and his country for a piece of tail who manipulated and/or killed everyone around her. AND HE LET HER DO IT!!!! (loved to hate her :D) Actors all did a great job and I do LOVE the comedic parts :D (Dok-Gae especially) Getting ready to watch the next one in my list, The Kings Dream. Cheers!

Fábio Vasconcelos Barreto Jul 27 2018 11:46 pm This is one of the best series I ever watch. Today was the second time I finished to watch it!﻿

Ana Jun 08 2017 9:42 am I always read this website reviews before I start watching any drama in USA, cuz opinions I find are always reliable.This drama is currently airing in local k channel in Chicago

Mimi Oct 01 2016 11:42 am Love the actor Leo Se Jin. He's one if the best brilliant korean actors. The General, Gyebaek was a great warrior! But lost respect for him when he killed his own family (based on true story or history). Yet, he wanted for the EVIL TRAITOR Queen to live? Inhumanly Disgusting! I stopped watching the part when he killed his family. No wonder the rating was BAD. So bad, Drama Fever didn't air this drama.

Mimi Oct 01 2016 11:34 am General, a great warrior! But lost respect for him when he killed his own family (based on true story or history). Yet, he wanted for the EVIL TRAITOR Queen to live? Inhumanly Disgusting! No wonder the eating Gwad BAD. So bad, Drama Fever didn't air this drama.

ManiLLa Jun 14 2014 9:17 am This drama has debt ... epic history of Bekjae's army. In 660, Baekje was invaded by a force of 50,000 from Silla, supported by 144,000 Tang soldiers. Gyebaek, with only 5,000 troops under his command, met them in the battlefield of Hwangsanbeol. Before entering the battlefield, Gyebaek reportedly killed his wife and children to prevent the thought of them influencing his actions or causing him to falter in battle. His forces won four initial battles, causing severe casualties to Silla forces. However, in the end, exhausted and surrounded, Gyebaek's army was outnumbered and overwhelmed. Baekje's forces were annihilated in battle along with their leader Gyebaek. Baekje was destroyed after 678 years of rule, shortly after Gyebaek's defeat and death at Hwangsanbeol. As Neo-Confucian philosophy became more influential in the later Korean Dynasties, Gyebaek was recognized by historians and scholars are exemplifying the Confucian ideals of patriotism and devotion to his King and praised as such. Although not much else is known about Gyebaek's life, his actions leading up to his last battle are well known to many Koreans. SALUTE! Lee Seo-Jin did a very good job...

Jammer Oct 17 2013 3:19 pm ... and one more thing, cho-young, they could have chose a prettier actress, her personality doesn't fit the character. a prettier one could have made this gye-baek more exciting to watch hehehe

eghonghon Sep 15 2013 5:16 am I just Watched this drama Gye BaeK and become so disapointed and Heart broken how can the prince forget so easily how he suffered to get his Crown. And betray Gye Baek. I find it difficult to contiune watching!

Freeman Baker Jun 28 2013 12:06 am Gye Baek has all the right ingredients for a great drama. I think this is written for a more mature and focused audience. I really enjoy the strong characters and how their lives are interwoven. I love the fact that Gye Baek follows in his father’s footsteps even though it was not his father’s wish for him. It’s almost impossible to suppress the greatness that is within a warrior. I love every minute of this drama. It’s a great historic drama that shows the road of suffering that Gye Baek must overcome to find his true place. If you look at this drama from its historical side it would seem a good story and the fact of being able to watch this historical drama is fun so after watching the two first episodes I’ve decided to watch the whole thing because I’m kind of captured by the events and the main actors. Great storyline, great characters, great casts (may I say, the child actors and actresses stole my heart and unquestionably AMAZING props! Action, suspense, greed, lust, LOVE ... all in one. I love historical Korean dramas and Gye Baek is one of the best. Especially Leo Seo Jin I like him I watch most of his dramas; he is one of the best actor of Korean Drama. As I liked him in Yi San, his performance there also being a good looking man, I must say that he really fits for the character role. Good sets of actress & actors. The story line is good although I find in some scene a bit slow & kind of boring. The intensity is not as intensified but still interesting. Not much of the twist & turns, you can easily predict how the next scene will go. But over-all I still like this drama. Song Ji hyo & Lee Seo Jin had done great jobs on their acting. Although I found little annoyed by some characters, the storyline went well and definitely recommend this drama for your viewings. I would like to add that I have always been a fan of historical dramas and I gave this drama a chance because Hyomin (Park Sunyoung) of T-ara is in it, Hyomin is so talented, I don’t care what other people says, this girl can do anything, she can sing, dance, rap, draw, design, edit, produce, play the piano, act, model, photographer, horse riding and she's funny and doesn't care about her image. But as I watch each episode, it’s no longer about Hyomin anymore, this drama shows how far General Gye Baek had to go and how many hardships he had to overcome to stand in his rightful place. The main actor is the right person the writers picked for this drama. I don’t understand why this drama did not make the ratings it is a great drama and a very well put together cast. I think more mature adults would understand this drama. A soldier would understand this Generals life more so. It is not easy. Even I, who does not understand Korean, can see how difficult it was. Thank you for this drama and the great cast that portraits this great Korean hero.

Seinjin Mar 16 2013 1:30 pm Gotta love the irony of it all, Eun Go becoming a much more maniacal twisted villain than Sak Te Bi and Euija turning out to be the SOB he was destined to be, and after everything Gye Baek died albeit his long suffering but left a lasting legacy as 1 of the greatest hero in Korean Folklore! Not bad

huey Feb 24 2013 6:08 am Gye Baek is truly Korean Hero. He is much greater than general Kim Yu Shin. If Shilla only use their own soldiers / forces, definitely Kim Yu Shin is defeated by Gye Baek. And Shilla can't unify the 3 Kingdoms in Peninsula. With only 5000 soldiers to defend Baek Jae, compared to Shilla-Tang alliances which has more than 100,000 soldiers. Gye Baek is the real war strategist and greatest general ever in Korea 3 Kingdoms!!!

hannah Aug 31 2011 5:33 am i love Lee Seo Jin i just finished watching ''yi San'' it was amazing lots of emotional feelings there i hope u gus reading this comment liked it or if you havent seen it watch it plz u will love it from epic 1 to epic 77