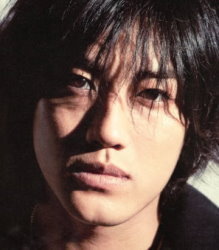 Jin Akanishi was born July 4, 1984. He is a Japanese singer and songwriter, actor, seiyū and television personality.

Solo singer and former member of the popular J-pop group KAT-TUN. He also debuted as the vocalist of the rock band LANDS, along with Takeshi Kobayashi for the movie Bandage. He has, in the name of a band in the film BANDAGE, ranked in #1 in the Oricon ranking with the album OLYMPOS (released January 13). This is LANDS' 2nd consecutive #1 after the first single released in November last year. The only other time in history that an album which was released in the name of a movie character was #1 was in October of 1996, when the band YENTOWN in the Shunji Iwai's directed film Swallowtail Butterfly released the album called MONTAGE.

savanah Aug 26 2020 6:32 pm Jin rarely acts, but when he does, it's always superb. His eyes and eyebrows know how to express emotions. More movies and dramas for this babe!

carol1108 Oct 30 2012 8:04 am i wish Jin had move dramas or movies. he's amazing. for the first time i saw him in Gokusen, but, to be honest, i didn't pay attention on Jin or Kame etc. and i didn't care for the cast names. but there was a time when i wanted to watch some movie instead of dramas. and Bandage seemed nice to me, so i watched it. and i fell in love with it. this move is sooooo amazing. it has a deep meaning for me. but i must admit that Jin caught my attention. i thought "hey, i've seen you somewhere...". then i checked his name and saw that he played in Gokusen. i'm a big fan of his since then. he has such an amazing voice. it helps when you can't sleep. it's like a lullaby :) especially "eternal"

"It is difficult to describe Akanishi Jin with one word. For someone “natural”, he is firm. For someone “free”, he is delicate. Every word seems to be a little off. But as you hear his words, the very attempt of trying to describe him as something is by itself a mistake. Akanishi Jin is Akanishi Jin. He is just simply living as who he is. He’ll make you realize that."

And that is why I'm an eternally loyal subject. :) Jin, I think you just might have my favorite personality in the world. Yeah you take hot and sexy to a whole other level, you can sing and dance amazingly, and your song-writing skills make people want to get married just so they can use Eternal as their wedding song, but I love your personality the absolute most. You might not realize it, but you and your choice to go to America against all odds has been an inspiration to many people. So never change, Jinny, just please always stay as you are. <3

and his english is very good xD

viola Jan 25 2011 10:54 am Jin sama. I have a wonder..... You know.. about Yukan Club (hopefully you remember..) When all of you tries to solve problem you all said making impossible to possible. Do you think it will be possible for someone to walk on the path journey for several years..and able to acheive the goal?.... Lol.. What the hell I'm saying you would think. I just felt that if anyone knows questions to that answer it would be you. actually...... I wanted the answer from you but I couldn't find official fan site so I couldn't ask. Whenever I want to give up.. Whenever I feel I'm the only one going through the hardship and want to cry I feel that Yukan Club is cheering on for me. Saying there is nothing impossible. When I was in middleschool Yukan Club was exact replica of how I was. I believed in it too about possible until...... It was too hard to make it possible. And I have to fell down in highschool. Anyways. Good luck.

Elaine Aug 15 2010 2:12 am I miss Bakanishi so much! Even tho I really feel he oughta stay with KAT-TUN, I guess it's good that he wants to go down another new path. We fans will always support Jin, ne!

akanishilover359 Jul 12 2010 7:54 pm This man is amazing. His lyrics are always perfect, his music is so much fun, and his lives represent everything that he says he wants to represent. I am ENTIRELY grateful that I got to see him in L.A. for the very first J.E. concert in the US. AISHITERU AKANISHI JIN-Your voice is absolutely incredible

misteriousgirl Jun 20 2009 4:00 am AKANISHI JIN oh gosh his so hot,cute,adorable all that im looking for a guy his perfect angel's face devil's body hahaha in so inlove with him i dont like his tv show ANEGO they dont look cute pair im angry because he is paired in older than him but please support akanishi jin always aishiteru...............