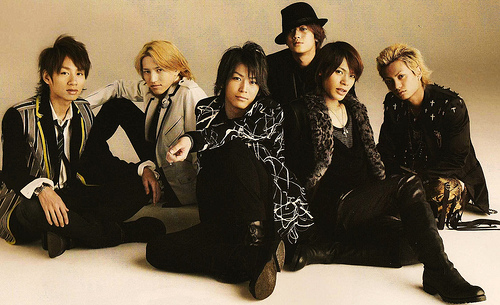 raluk Oct 04 2010 11:41 am KAT-TUN, you're my fav band and for me, KAT-TUN no "A" stands for Akuma Forever i still love KAT-TUN, with or without Akanishi you're the best keep going on Gambatte Daisuki

Francesca May 14 2009 5:49 pm KAT-TUN, you are my favorite music group of all time, in the whole world!!! You guys have talent like no other group, and are better than the rest. Every member of this group has their own special talents and personalities, but you all go great together. You guys keep me alive and happy even when I'm feeling down, so I thank you for that. I admire all of you, and am glad that you are all staying true to yourselves.

PLEASE come to the USA [New York / Boston!!!] All your fans are waiting for you to "go worldwide" x3

I wish you the best of luck in the future, and hope that you never stop making your amazing music! ^^

~A BIG fan from Massachusettes<3