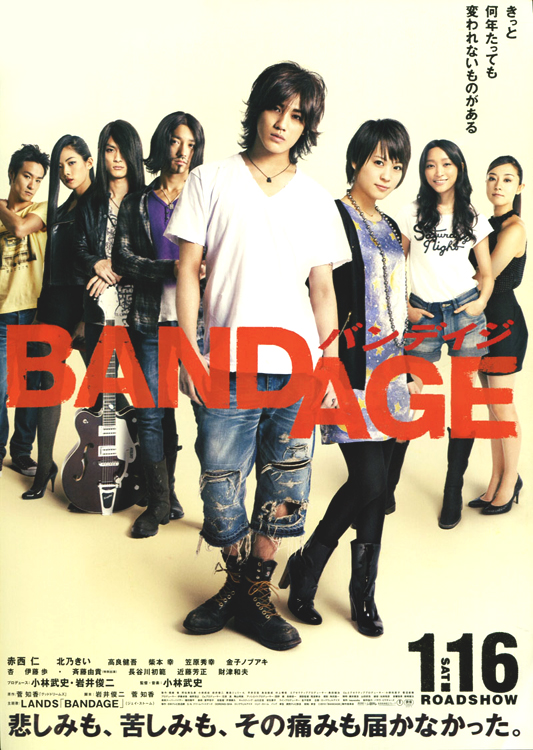 Set in Japan in the early 1990s, there's one rising band called LANDS, that is starting to find success amidst a flood of other bands.

Asako and Miharu are two Tokyo high school students. When Miharu gives Asako her favorite indie rock band; a LANDS CD, she becomes an overnight fan and sets her heart on the talented guitarist Yukiya.

When they go to see them in concert, they sneak their way into the backstage area and Asako gets acquainted with some of the band's members. Natsu, the vocalist, is immediately attracted to Asako and begins bringing her along to the band's practice sessions. Though Asako enjoys it, she proves to be a distraction to the other band members and is soon ejected from the session by Yukari, their manager. But Natsu is determined to keep her around, pulling strings to make Yukari and Asako to become friends, and eventually, helping Asako to become LANDS assistant manager.

LANDS was formed among friends, but as the band begins to climb the ladder towards major stardom, they get in touch with the dark side of the music industry, discord surfaces, inevitable frictions emerge, and unrequited love strains their friendship, threatening to pull their bonds apart.

Elisa Aug 20 2016 9:36 am First, I liked the songs a lot. Like, I absolutely have to buy them somewhere. If they were a real band, I'd be a fan! The film is correct, and a lot of scenes are very interesting, nice... But maybe, it wasn't put together that well? Like, I didn't really understood why they blamed Asako for their downfall?? And a few other details that were a bit strange, but well. That's still a great film, and I think it wanted to be philosophical and about music, but it's not totally achieved. Something is missing... Maybe the "2 years later" "3month later " ect were... Too much ? One would have been ok but... Well. It's still a great movie that depicts quite well the situation of music and young people in Japan in the 1990 ^^ I'd watch it again, even if it's for the songs ~ (-> a must watch!) I think everyone understand this movie a bit differently, and that's interesting!!

Swara Mar 22 2016 9:13 am Jin Akanishi looks good. His acting skills are just average. He better stay as Idol rather than become an actor. His former band-mate Kame is better in acting skills.

Lumin Feb 29 2016 10:45 pm i like the songs in the movie and if they're an actual band i will totally listen to their songs hehehe the movie for me is just okay. i guess this is that kind of movie not for everyone i guess? cause for me i don't get some parts of the movie. but yeah idk but that part when jin started singing hatachi no sensou idek why i cried a bit it's just so sad and painful for me haha ugh :-) but do watch this movie! it's interesting!

Serenity Jan 26 2014 11:23 pm uhhh! I don't like the movie . i always prefer watching foreign movies rather than philippine movie but GGggrRR ! this one made me regret :3 yeah they maybe sold over a 70000 advanced tickets but i think it was more than because of casting esp Jin himself . thats why they only got those 'my movies audience and fan awards :3 Jin didnt able to won a best actor award

MikeyCknowsrnb Jul 28 2013 12:33 am This was a good dark/indie film with one heck of an OST. I would most definitely be a LANDS fan if they were an actual group. The movie is good but where they went wrong in my opinion was with Asako's character. You don't really know what her role is which makes this movie confusing. This could have been a decent movie with a typical story line about a rock band who starts off great then have personal issues (money drugs jealousy, whichever) threaten disbandment but of course it all works out in the end. The thing is Asako is a lead role but has no real purpose. It could have been a romantic story but in the actual movie she spent more time playing side manager than a girlfriend which is why it made no sense when the rest of the group blamed her for their downfall. The movie made it seem like Jin would try to make "playing hard to get" Asako fall in love with him but they literally had little scenes together after she becomes their sub manager. You forget about the love line until they force it back into the script towards the end with Asako's "cheating" kiss on the beach. You even forget about Asako after the break up scene until the 2 years later slide and your like "oh yea she's in the movie too." The movie would have been great if it was solely about a young bands trials and tribulations. But instead it becomes confusing with the under developed love line.

Shirley Jul 28 2012 3:07 pm @Eyes Scream05: Loved your take on it. It's refreshing to see the point of view of an actual musician. But I disagree on the ending... or maybe that's what I'd like to believe. Asako is still a kid and has not matured enough and Natsu has issues with himself. And they manage to get the worst out of themselves when they are together. Although it's not very explicit, the director himslef has said Yukiya has a huge crush on Natsu. I'd rather believe Yukiya ends up with the vocalist, although his actions actually hurt him in the movie, but I think he did it to make Asako stop playing with Natsu.

Eyes Scream05 Jul 06 2012 9:59 am For those who didn't get the movie well you must watch it again... But if you are able to understand the movie without watching it again then it means that you have the heart of a musician... For me the movie is very touching.... I am an aspiring musician and base on what I have watch I believe that being in music industry is tough.... A band is a band and it must stay strong in times of hiatus... I can relate to Yukiya and Natsu.... their character and attitude in the film are just like me: Natsu which hate himself because he believes that he doesn't have talent at all and Yukiya which is talented but he believes to himself that there is no such thing as talent.... In the film you will see that Yukiya writes a song without meanings but in truth he is inspired to write a song because of what he can see in Natsu that gives him inspiration to make such a wonderful guitar riffs... So it means that Yukiya is inspired because of Natsu but Natsu didn't notice it... For those who don't know what happens on the last part of the film well it's common sense... Natsu and Asako will be together in the end.... Well I am encouraging those who have their own band to watch this interesting film ^_^

Shirley Dec 17 2011 9:08 pm I guess this is not a movie for everybody, because it makes you think, and people are not used to that, they just want to sit there and expect to be given all the info they can get. Despite its flaws, it is a great indie film. Akanishi has certainly improved and his voice is unique. I'm disappointed that they didn't dwell on the one-sided love of Yukiya towards Natsu, which is the reason why he turns against Asako.

ryunochairo Oct 10 2011 7:43 am This movie is one of the best flims from the industry in quite some time! The spirit of the sound is what this movie entails. Asako and Natsu's journey is not over yet. I hope Iwai-san put together a sequel with all the same characters! It would be a shame not to! I have seen other films by Iwai-san, but this is a very inspirational film. For the fans and musicians, alike. If you are involved in music as a fanor musician then this is your movie "zen-mantra." The journey is the sound, the destination is your soul! This is BANDAGE!!! I am enlightened by this film. The actors and actresses where excellent! I am in awe!!!! Sequel???!!! There should be! It's up to the director and Iwai-san!

Ren-Chan Jun 18 2011 5:43 pm This movie is amazing. It needs a part 2! That would make me extremley happy! :D Even I was confused in the ending...it was a big cliffhanger..but this was one of my favorite movies ever (:

Sakura Feb 23 2011 8:58 pm I really don't get what happened at all towards the end? Anybody explain please?

Victoria Apr 19 2010 7:02 am I want to see it so much!Well,i have to wait too a very long time,because i live in Bulgaria!But i'll wait even if it's 1 year or more!Becouse i know that Bandage it's going to really really good film and can't be miss!

“After we watched his video clips, I was very shocked. I didn’t expect such an actor in Japan. However we do have some occasionally, such as Kimura Takuya and Tadanobu Asano. All of a sudden they come to your face and surprise the world. This kind of person doesn’t need to brew slowly, but are more a bomb you feel like it’s either going to explode or disappear.[…] His personality already makes people think of him as an animal who cannot be caged, and everybody can totally feel this unique personality in the story as well. ”

trish Jan 30 2010 6:16 am this movie is awesome! watched it in japan last january 20. it happened to coincide with a trip that my parents planned for quite some time for us to visit relatives there. call me a sap or dramatic, but i cried near the end. akanishi jin and the rest of the cast are great at their portrayal of their roles in this movie. and for a first time director the film was really good.

i love hanadan but where the 'hana yori dango' movie was like a 3 hour cartoon strip, 'bandage' is two hours of literature. it was lovely.

Sheryl Dec 17 2009 7:00 pm The movie has an interesting love triangle. Natsu is in love with Asako, she loves Yukiya, but that guy loves Natsu. I can't wait to watch it!