Don't Let Your Money Down 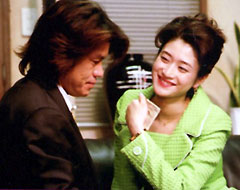 The story unfolds in the Tornare High School, which is on the verge of bankruptcy. The chairman of the High School had died suddenly, and her grandson, Taro (Taichi Kokubun) is appointed as the new chairman according to her will. Sweet talking to Taro, Taro’s cousin and the President of the school, Takaaki attempts to sell the school. However, Taro is willing to reconstruct the school only because “it was his grandmother’s wish”. Reviewing the will, Taro finds out that his grandmother wrote “When in trouble, go and ask Mr. Yuuki”. A couple of days later, a rigid looking man arrives at Tornare High School. This man is indeed Seiji Yuuki (Noriyuki Higashiyama); a renowned accounting expert. Being an enthusiastic cost cutter, in Yuuki’s eyes, everything is calculated according to the value of money. He announces that anyone who is not doing his job, and anything which costs are higher than it should be are target for restructuring. Through Yuuki, the teachers, students and the members of the school community, realize the real meaning of “how to spend money in a proper way”.