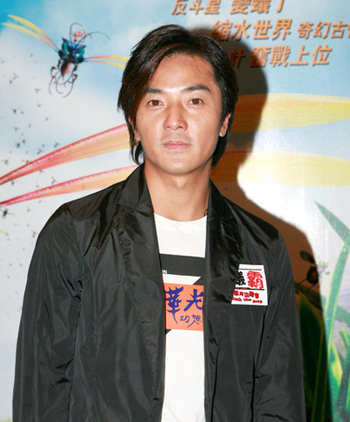 Ekin Cheng Yee-Kin is a Hong Kong actor and Cantopop singer. Earlier in his career he was known as Noodle Cheng, though he has now reverted to a more conventional-sounding first name. Sometimes he uses Dior (because that was what it sounded like when his younger sister tried to call him) as a first name but usually Ekin is the name used.

Ekin began acting in commercials when he was in high school, the most well-known being for Hi-C Lemon Tea. After high school, he enrolled in TVB's Martial Arts school, but did not like it and switched to their acting school. After that he began to get a number of TV roles. The latest TVB series he participated in was Always Ready, working with Charmaine Sheh, Bowie Lam, and Ka-Yan Chung.

Ekin was caught up in a grand scandal after leaving Maggie Siu, an actress whom he dated for many years, for a decade younger actress and singer Gigi Leung. Maggie was well-loved by Hong Kong audiences and gave up her career to support Ekin's career and many slighted him after the breakup. In 2006, Ekin and Gigi broke up, ending their seven-year relationship.

In September 2006, Ekin and 'Yoyo Mung' begun dating through their mutual interest in badminton.

His first film was Girls Without Tomorrow (1992) and at the time he was still going by the name Dior Cheng. He changed his name to Ekin before his breakout role in the Young and Dangerous series as Chan Ho Nam. The film led to 6 sequels, all starring Ekin Cheng, and a lucrative working partnership with director Andrew Lau. Together they went on to make The Storm Riders, which was the highest-grossing Hong Kong movie at the time and the first film to utilize a truly large number of special effects. They also worked together on The Legend of Speed, A Man Called Hero, The Duel and the comedy Women From Mars.

Ekin has branched out in the roles he's taken, including more comedy like earlier in his career with My Wife is 18 and Six Strong Guys, while still doing more action-oriented films like The Twins Effect and Tokyo Raiders.

Recently Ekin returned to the movie scene (having taking a break in 2005 to work on the Ultraman TV Series in Thailand), He had a brief appearance in My Name is Fame as himself. Soon after that he starred in Heavenly Mission a triad/cop thriller starring alongside Stephen Fung & Alex Fong. He has completed a Pang Brothers film called The Forest of Death, which will be released in March 2007. He is currently filming a serial in Mainland China based on the life of martial arts master, Huo Yuanjia with former Young & Dangerous co-star Jordan Chan.