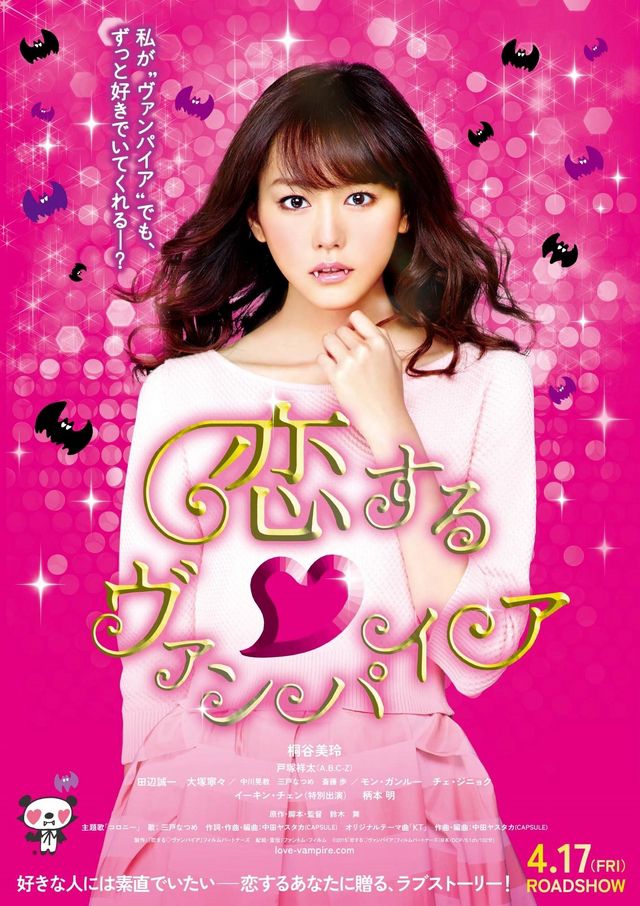 Kiira (Mirei Kiritani) seems like an ordinary young girl, who likes to talk with her friends and to dress up. Her ultimate goal is to become the world's best baker, but what differentiates her from others is that she is a vampire. She has never told anyone her secret, including her childhood friend Tetsu, whom she played with everyday and liked as a child. After her parents died when Kiira was only 12-years-old, she had to go live with her relatives and lost contact with Tetsu.

Now, 8 years later, Tetsu appears at the bakery where Kiira is working part-time. Kiira is ecstatic to see her first love again. Soon, they are dating and Kiira dreams of having a family with Tetsu. Kiira also becomes filled with worries because she is vampire. 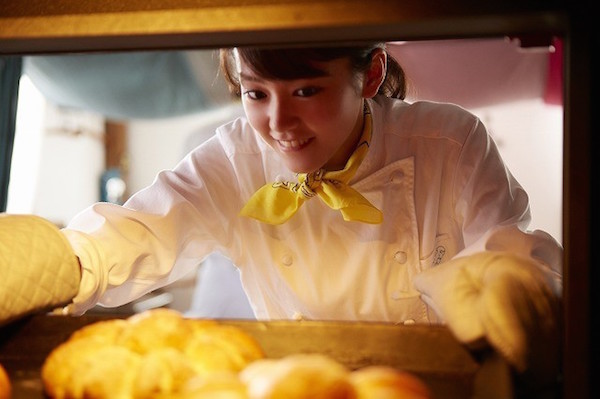 Taoe Oct 14 2019 1:42 am The cast has so much potential, but it kind of goes to waste because of the plot, screenplay and editing. Like I really like the actors and I watched the movie because of them, but it was really disappointing how the movie was bad even though they had great actors. Like the plot is something a 11-year-old, who has just read some vampire books, could come up with, quite predictable, plain and sloppy. The special effects look like they've been done with a pirate version of after effects and the video graphing is just...no. So, I wouldn't really recommend this movie, but of course, you can form your own opinion about it if you end up watching it :)

Adriana Dec 27 2017 11:21 pm When i read the plot i thought the movie gonna be bored (I'm still gonna watch this movie b'cuz of Kiritani Mirae) but this movie is not really bad though like my everyone say (not every1) .. I'm really shocked when I saw choi jin hyuk in this movie XD wow # the lead guy is cute XD XD (Pardon my english, it's not my first language.. )

anon Jan 02 2017 7:43 pm To those who had high expectations for the movie because of the cast -- this movie is so disappointing. The screenplay for this movie is subpar and predictable, and the special effects are on level with someone who has basic knowledge of Adobe Effects. It's a shame because these actors are clearly talented, but the script and screenplay aren't executed very well. Take my word for it and avoid this movie.

Slushie Nov 30 2015 9:12 pm Hi just wanted to point out to a comment, Summer Meng's from Taiwan, not Thailand. Lol people keep mixing these countries up.

Rhel Aug 20 2015 12:34 am All of the bashing is completely unnecessary. Choi Jin-Hyuk is a successful Korean actor who landed a role in a Japanese movie. He likely makes more money than anyone who's commented on here. The fact that he's not the lead role in the movie is no testament to his acting ability. If anything, casting a foreign actor is a testament to their strength. Did anyone even notice that Summer Meng who is another leading actress in a country other than Japan (she's from Thailand) is cast as a supporting character in this movie? I hope it was a good movie and makes it online some time in the near future so I can check it out. I don't care who is in the movie, I hope they can all act and that it's well written!

Daychan Aug 06 2015 9:43 am I'm here because i'm interested in Kiritani Mirei but seeing all the previous comments made me sick.. at some point i'd agree with the statement that it's already a good thing that a korean actor got a role in another country. it's not easy as in his own country because it's japanese movie and most of the viewers will be japanese people. do you understand this fangirls? please don't be selfish and think too exaggerated about your bias, and even insult the lead actor's management company so harshly. seriously. i really hate fanwar about Korea and Japan. please keep calm. if you don't like then don't watch it. i really don't understand how hardcore a fangirl can be, LOL!

Lina Jul 24 2015 5:15 am I'm sorry to whom hate Choi Jin Hyuk for not becoming the lead, but u have to know that this is Japanned movie not Korea movie, the truth is I'm in love with Choi Jin hyuk n i happy enough that he have roll in this movie.. you have 2 be happy, because not easy when another actor form another country have cash in japannes movie.. maybe Shota is newbe and we know how Choi Jin Hyuk acting is.. but we have 2 be wise here.. this is just my tought.. I'm sorry for not being in your side when I'm fans of Jin Hyuk

mwLmh May 03 2015 5:26 pm I think they are all "SOMEBODY" lol since they are human xD and you can touch them... And see them.. You know what I mean lol ~ who cares if someone is popular? It's not about popularity it's about the acting skills, they all began small, they all were "not popular" when they started their career so why making a big deal out of this? I think I'm so happy a Korean actor joined a Japanese movie, since I just adore Kdrama but love Japanese movies! ^-^ ,, I know for sure this movie is ADOOORAAAABLLLLLLEEEEEEE XD

I know exactly who Jhonny & Associates are. That's the company owned by that old sleazebag who molests the young male singers he has in his employ. You don't see my point here. My point is, Choi Jin Hyuk is a better actor than this Shota guy. He probably only got the lead role because he is a Japanese idol, I bet his acting ability leaves much to be desired. Lols, you and the other jerks that pounced on my comment are only watching because you're fans of some boyband, (thus the lame fangirl mentality, where you attack anyone who dares to voice an opinion that in any way besmirches your little boyband and your precious Shota) whereas I watch for CJH, who actually carries some clout (actually, make that a lot) in the film and drama industry.

Ana Carina Apr 19 2015 12:30 pm The reason why i came to know about this movie was bcuz of Choi Jin Hyuk,..all i want watch its him. He may not be famous in Japan nor in Philipines like someone said, but Hey! im from Portugal and i know his work and he is my fav actor.

1. Choi Jin Hyuk is NOBODY in Japan. He's not even that famous in Japan. 2. Totsuka Shota whom YOU claim as 'nobody' is a Japaness idol from a VERY influential and top company in Japan called Johnny & Associates. Mind you even SM Ent in Korea couldn't even surpass the superior of J&A in Japan. So there is no surprise why he can be the lead even in his first film. It's not only because he is from mega company in Japan but he is quite well active in theater stage play. He even played lead cast on stage play. So he actually have acting ability. 3. Since this is Japanese movie don't expect too much from your bias. I bet he already happy to get this job in Japan. If you want to see him as lead go to his korean movie/drama whatever he is starring..

C Apr 11 2015 5:54 pm omg, kpopkitty shut up your mouth. Who is Shota? PFF, WHO IS CHOI JIN HYUN?! Shota is a idol, and now is trying to be more active as an actor, so please stop judging and saying that he's a nobody.

jaja Apr 10 2015 12:35 pm I think kpopkitty is stupid. So what if Choi Jin-Hyuk is not the lead actor? He's just poular in Korea, not in Japan. He's not even popular in Philippines. They should love their own actors. If you want Choi Jin-Hyuk to be the lead actor, then make your own film.

kpopkitty Apr 07 2015 8:49 am It really grinds my gears that the Japanese (among other non-korean) are constantly casting Choi Jin Hyuk as some 'secondary' role. What is wrong with these people? This man is probably one of THE best actors in the whole of Asia (if not the world) and someone like Shota Totsuka (Who the hell is this guy anyway? He's a nobody! He's only been in one drama, and that was only on one episode, and this is his first film) gets the main lead role? The hell is this BS? I am so fed up with Choi Jin Hyuk not getting the credit (and the respect) that he so rightfully deserves. I will watch this film, but the only reason I will be watching it is for Choi Jin Hyuk.

Hobgoblin Feb 14 2015 3:55 pm I hope it will have a happy ending, not something like "she sacrificed herself because couldn't stop her vampiric habits". A vampire who wants to heal from vampirism is an interesting idea, and I adore childhood friend romances.

PBS Jan 30 2015 1:40 am The synopsis for this movie sounds so generic and cheesy, but here's to hoping that the trailers will prove me wrong because the only thing interesting about this movie is Choi Jin Hyuk's casting. But SERIOUSLY?! I laughed, I cried, and then I died when I saw his character's name, because LOL who calls their vampire proteges/progeny Vampire MIKE?! But then I cried when I realized he will only play Derek's subordinate, NOOOOO WHY ARE YOU ALWAYS PLAYING SECONDARY CHARACTERS IN MOVIES CHOI JIN HYUK?! And then I died because SWOON, even when he played a villainous lackey in The Divine Move, he made bad look so good in it, and hot damn he looks good here too. So here's to hoping this movie will be a lot more interesting than it sounds because this will be the only acting project to tide us over while Choi Jin Hyuk goes off to the army for TWO YEARS. I will miss your chocolate abs. Come back to us safely, oppa.