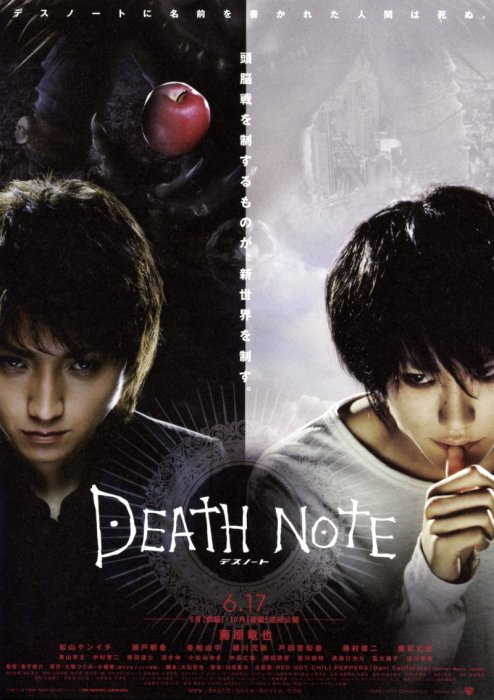 Weary Shinigami the Death dropped a notebook in the human world where a weary genius picked it up. “The human whose name is written in this note shall die” it said… It was the notebook of death that determined people’s death. Light Yagami, an extremely bright elite university student was the one to possess this ultimate tool that should remain only in the hands of God. Light decides to create an ideal world and begins to hold the scales to judge the criminals in his discretion. Meanwhile, ICPO (International Criminal Police Organization) has placed a mysterious detective called“L” in Japanese police force to investigate a series of the criminal cases. “L” in the status of a divinity for his capacity and skill in gathering information and in reasoning had solved unresolved cases in the world, and now tightens the investigative screws over these cases, but Light also cleverly manipulating the notebook of death, tosses and shakes the investigation. The future of mankind is at the mercy of crucial and fierce battles of the two brains. Billie May 23 2020 7:30 am I think the trilogy of these movies is one of the rare cases when a live-action movie is adapted so well to the anime! The producers did a magnificent job, as well as the actors! I admired Tatsuya and Kenichi in their acting roles! I love them both! They're so talented and handsome!

Superb Nov 06 2017 5:54 am Best live-action adaptation there is. All actors are so good in their perfomances. Especially Kenichi-kun. It's like, he's born to play the role of L. <3

Solar Fence Energizer Jul 03 2015 2:43 am One of my favourites anime series and Manga so far. Steel watches the anime sometime.

R Apr 26 2012 5:43 pm I always been a fan of the Death Note series and the film was very interesting. It was also very well done. Ken'ichi Mastuyama is a good actor and Im glad he played the role of L. L is my favorite character of all. Even if he dies its like he technically won against Kira(A.K.A Light)

maneki hobbang Oct 26 2011 1:57 pm the cast was chosen well. fujiwara, matsuyama, and toda all turned out to be lively, talented, and hardworking actors.

anyeeM229 Aug 23 2011 11:43 pm i was new to the death note plot, so this amazed me completely. it provides a great establishment of each of the characters and an even better set up for the even more intense second film.