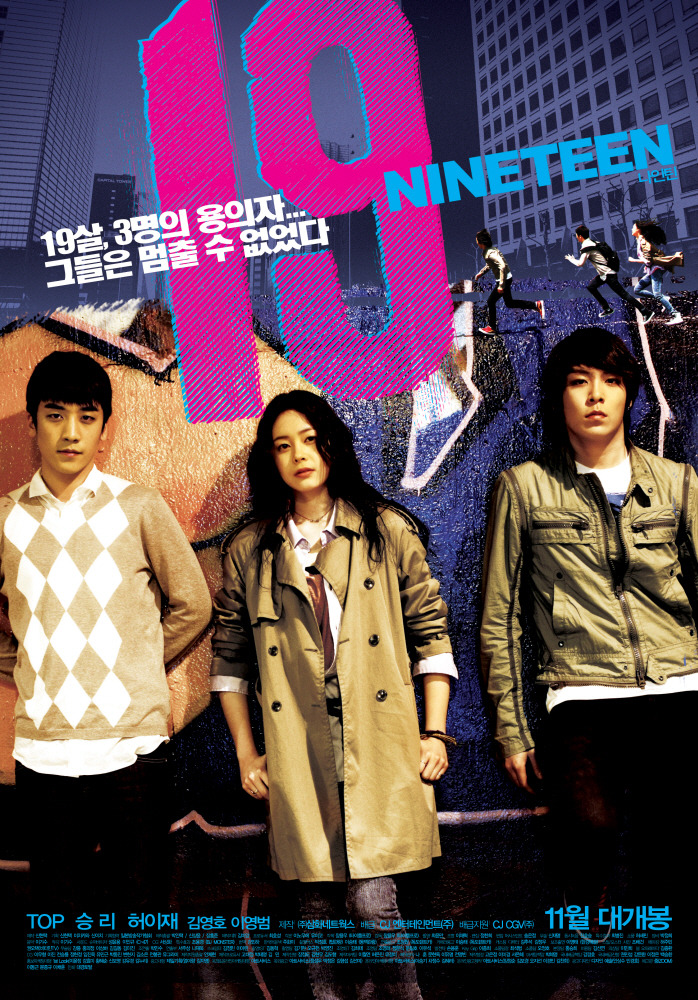 After graduating from high school Min-seo (Seung-Ri) fails to get into college. He spends the next year cramming for his entrance exam once again. Jeong-hun (T.O.P) is a university student fresh out of high school school.

Late one evening, a high school girl dies. Earlier that evening, Min-seo filmed the girl in an internet cafe without her knowing. Min-seo, Jeong-hun, and another girl named Eun-yeong (Heo Lee-Jae) - who went to the same high school as the dead girl - all become murder suspects in the death of that girl. All three of these young suspects are 19 years old. They don't know each other, but quickly become fugitives from the law. To clear their names they work to uncover the truth behind the girl's death ... Vanessa Mar 27 2019 3:53 pm I watched this movie years ago when I couldn’t sleep at night and I was going through a hard time. The theme song that’s sung by Seungri and TOP still touches me until this day. It’s a great movie! But I get a very nostalgic and bittersweet feeling from it

I love BIG BANG always have and always will. Always and forever a VIP.

OT5 or nothing else.

fbvip Aug 05 2012 7:09 pm This is such a great movie. There isn't any fluff in it. Very real and has an interesting plot. This movie is so underrated.

Vicky Jun 10 2012 7:32 am The movie is sort of hilarious because of Seungri and Top. I watched it because my biases are in it. Shin Min Hee is gorgeous! No wonder Min Seo was filming and capturing pictures of her. I wonder what would my life be if I'm going to turn 19, I'm still 13.

Dannazara24@mail.com Jun 09 2012 10:51 am Yes i love nineteen there is drama,murder,and freedom of the three suspect jung hun,eun yung,and the min seo.jung hun is so cool and know how to fliptop their were suspect becouse they all new the girl who was killed. there running becouse their chazed by the police and they have freedom to do all things jung hun is a working in the internet cafe,eun yung is working in the salon but she got fired her mother is in the hospital she need money to threats her mother,and the min seo he is rich his parents has buisness and he is mamasboy and taking a photo of the girl who was killed. The three suspect became friends and there do not know about the name of each other so there naming each other number one,number two,and number thirteen. Their solve there problems in their own and they finds out that the boss of jung hun is a murderer he said that it was an accident and the murderer is going to the jail but the three teenager is going to the jail too becouse they carnap the car of the police and dont have license they stayed the jail in one night and after what happen to their life there free again. Jung hun is fliptapping in the stage,uen yung is hired again to the salon she have job,and the min seo is study hard and he is change he is not weird anymore but he is cool now. I love this nineteen i hope there is a part two. THATS ALL FOLKS i like them so much :D

jessica Oct 12 2010 6:44 pm Love the ploot!!! But damn the trailer was nothing!! I want at least another 10 seconds. This is like nothing if people who don't know about the plot.