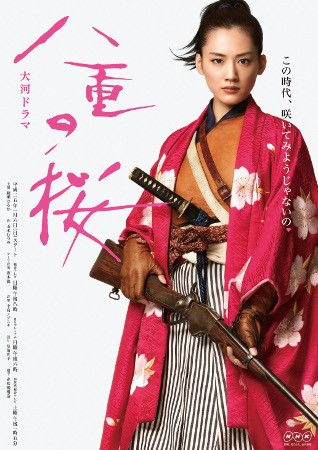 Yae (Haruka Ayase) is born into the Yamamoto family in Aizu, Fukushima Prefecture. Her father is Aizu domain's official gunnery instructor. Yae becomes more interested in guns than sewing. She learns gunnery from her brother Kakuma (Hidetoshi Nishijima) and participates in the Battle of Aizu. Aizu though loses the battle.

Yae divorces her husband Naonosuke Kawasaki (Hiroki Hasegawa) and walks away from guns. She finds a new interest in learning. Yae then meets Jo Niijima (Joe Odagiri), the founder of Doshisha University, and marries him.

Yae is a strong proponent of gender equality and acts according to what she believes in. This rubs others the wrong way, but her husband, who experienced western culture in the United States, supports her. In her later years, Yae servers as a nurse during the Russo-Japanese War. Yae is later referred to as the "Nightingale of Japan".

Hai-desu Aug 01 2016 11:55 pm Does anyone know the name of the Actress that played (adult) Mine Yamamoto? If someone knows, please let post her name.

ARVIN G Jul 20 2015 10:32 am this is the frist time that i have watched this kind of j drama at it is stunning that they have gatered all the actors and actresses spanning in all generations. I can say this is star sudded production.

Jay Jun 28 2014 5:24 pm This is the 1st Japanese historic drama that I actually got hooked into. I don't normally get hooked into historic Asian dramas because they usually don't pertain to my culture, but I still liked this one. I found myself learning much about Japanese culture while at the same time enjoying the drama.

Ron Mar 09 2014 3:08 am Enjoyed this story about Japanese history and the transition that the entire country underwent at every level of society as a result of the new pressures of westernization, industrialization, technology, new political influences, as well as

Thank you for producing and showing such a amazing drama and educating myself and thousands of others about traditional Japanese culture and history. I feel that I have learned more about life and its many challenges through this story and much insight into the Japanese and Samurai culture.

katy Sep 18 2013 8:21 pm excellent drama , so real , i can understand Japanese history and unique culture from this drama .

through this drama i can learn Japanese history and culture .

i can see none of non- Japanese actors can act as true Japanese , even Korea actors and Chinese actors , they are poor in acting , very poor .

katy Jun 09 2013 4:34 pm Excellent Japanese historical drama , make me feel like living in that century . Excellent from directing to script to acting .

DaDa Nov 21 2012 9:48 pm The official poster was released today and Ayase Haruka looks like she can kick some serious ass! I can't wait until they release a trailer!