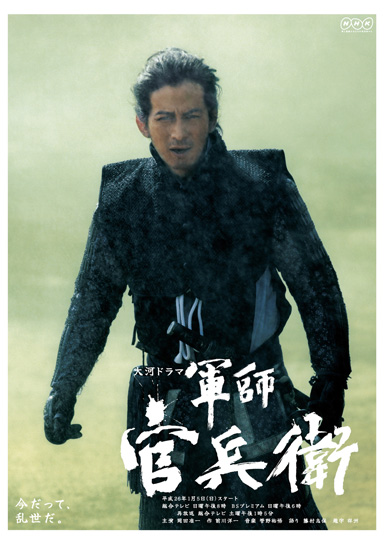 gylman May 15 2016 12:46 pm I've quite a few of these Taiga dramas, and this one I think is the best I've seen from those made in the last 15 years (I haven't see older ones than that). It has the same engaging characters as Tenchijin, but better filmed and acted. This period in Japanese history is so fascinating.

Mitsuo Feb 02 2015 1:06 pm Brilliantly directed! Japanese cinematography always amazes me. Director, Kazuhiro Motoki, captured not only the essence of the times, but also the heart and soul of a warrior's plight through the conflicts of tradition, war, friendship, romance, family and even in illness. My only regret is not being able to watch all episodes. Hopefully it will be available in DVD.

Patricia Aug 14 2014 10:57 am Not only do I love the Strategist Kanbe series, my parents do as well. I have been searching for the DVD on line and can't seem to find to purchase. Will it be available once the series concludes? If available please advise me where to get it. Much appreciated...

Jerry Lem Apr 20 2014 11:31 pm I am completely enjoying this series about Strategist Kanbe. It is both entertaining, intriguing, the story is well written, and the actors and actresses have excellent performances. Most importantly, it teaches me about the Japan of long ago when everyone were divided into clans or tribes. Often, these clans allied with each other or fought with each other. Many lives were lost or destroyed due to constant wars and conflicts. The roles for Japanese were often determined by the social rank they were born into......peasants, warrior (samurai), nobility, merchant. Women always had a secondary or supportive role to their husbands and girls were married into other clans by mutual arrangement and how the affected clans would benefit by the arrangement. Loyalty to seniors, lords, were of primary importance and any form shame or dishonor may result in self-suicide or capital punishment. Thank you for this movie production and the very clear English subtitles that came with it.