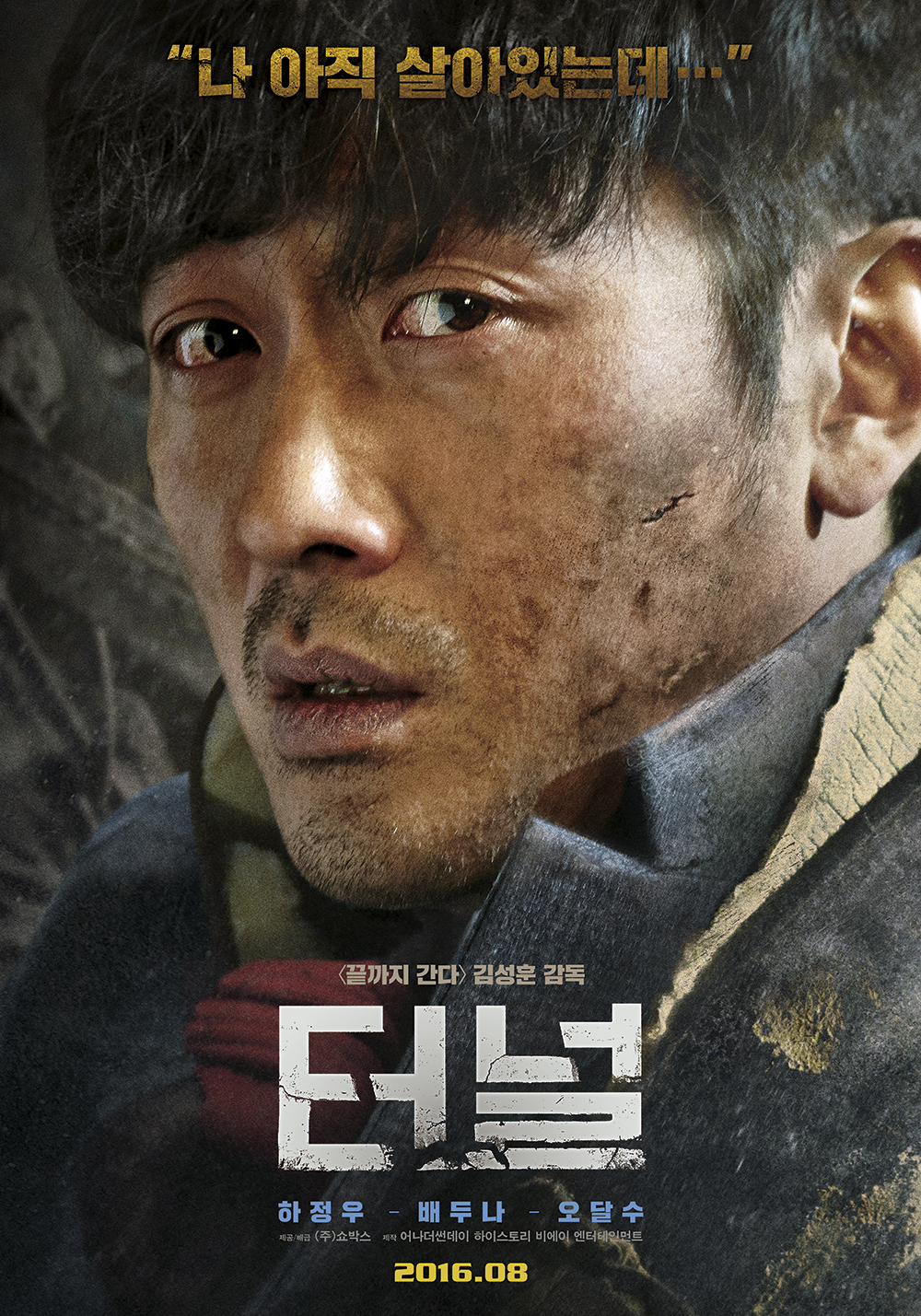 Lee Jung-Soo drives home for his daughter's birthday. While driving through a tunnel that crosses through a mountain, the unthinkable happens. The tunnel collapses. When Lee Jung-Soo regains consciousness, he finds himself trapped inside his car. The car itself is buried under thousands of tons of concrete and debris. All he has inside the car are his cellphone, two bottles of water and his daughter's birthday cake.

Inshirah Lim Mar 21 2020 11:27 pm A not so realistic movie but highly recommended nevertheless!!

Ruvelyn macayayong Feb 26 2019 9:23 pm Well im a great fan of korean movies. But this tunnel captured my heart. I can hold my tears and breath while wacthing this. Its a great movie :)

realistically, this movie is too hilarious; samsung phone (assuming the movie came out in 2016, so the latest of the phone would be galaxy s7) that lasts 17 days before the battery dead (even if its only used for talking but if you turn off and on it again, then the default setting would boot up all the apps jung soo had installed, not included from stock apps from samsung and google (believe me, unless you root the phone to readjust the permission or uninstall the stock apps, its fckin battery drainer>>doing this daily would eat up the battery, and its not from 100% but around 80%), and thankfully the infamous s7 didnt explode during the caved in even after it slightly broken. then of course how could he stay that long, almost a month, only by eating a cake (that almost of the half of it had been eaten by the dog) and dog food pellet, with 1,5 bottle water (assuming 0,5 had been given to the other person) and his urine? i can see that later he got "source of water" but its so unclear since the scene is only a drop of it. other variables like how about the dog? the long lasting car battery for him to listen his radio station, the state of the tunnel before and after demolition, the cold of winter when hes not wearing enough warm clothes, point is if its real, hes already rip. i mean, it would be great if the makers put more attention on how to make it more realistic and not oversimplifying things, like 127 hours. parts that are more believable is how the government is depicted, theyre do anything to get our votes, arent they? also, the whole dilemma on saving 1 person and all, how jung soo was willing to give some of his water and phone to other person during the caved in (i kinda want to see how jung soo meet with the mother of the dead person and giving the dog to her), the ending is too bland for me, so i cant find how this movie is special, other than how good the cast and cgi are.

Eskimo Jun 24 2017 3:43 am @Nhat Ngo broooooo dogs are sentient beings. They don't eat the corpse of its owner just because its hungry

Malditang Bugay Feb 09 2017 6:05 pm This is an intensely claustrophobic experience and I am not even a claustrophobic person. They really capture the emotion during the situation, the camera angle, the sounds from falling rocks and the dust particles are what makes it possible. Aside from suspense, the drama is pretty heavy here as the dilemma falls to the people involved like the rescue leader and his wife, you will feel sympathy for them.

Danniah Nov 07 2016 9:50 am This movie is about humanism. In very restricted condition, Lee Jong Soo still take care of stranger Mina and her dog. He still keeps his positive mind. Most of people would give up or go crazy if they face the same situation with Lee Jong Soo. It is very contradicted with the politicians and the company who wants to stop to save him because of their own greed and mistake. Well, I guess that's the difference between the SAR team capt. and the politician. One works to save life, the other one works to take profit from someone's life.

Overall, this movie is indeed great. As what we can expect from HJW.

Note: I personally loves the dog and the way Lee Jong Soo jokes at the end of the movie.

SH QA Sep 02 2016 7:36 pm I saw this movie in the theater in L.A. today. Very good acting by Ha Jung Woo and Oh Dal Su, as always. The movie was very good, and the story maintained a good pace. The CGI effects of the collapsing tunnel were realistic. I was surprised that Jung Soo's cell phone battery and his car clock radio lasted that long. The ending, with Jung Soo and Se Hyun driving into the tunnel, was a tense moment. I hoped to see Jung Soo present the pug to their daughter, as her birthday present, at the very end.

i am here Aug 30 2016 4:32 am Just watched it in cinemas with a friend. Amazing movie which doesn't get boring at any moment. Really put me on edge, and the cinematography is really damn good. Warning: they play with your emotions !