To Give a Dream 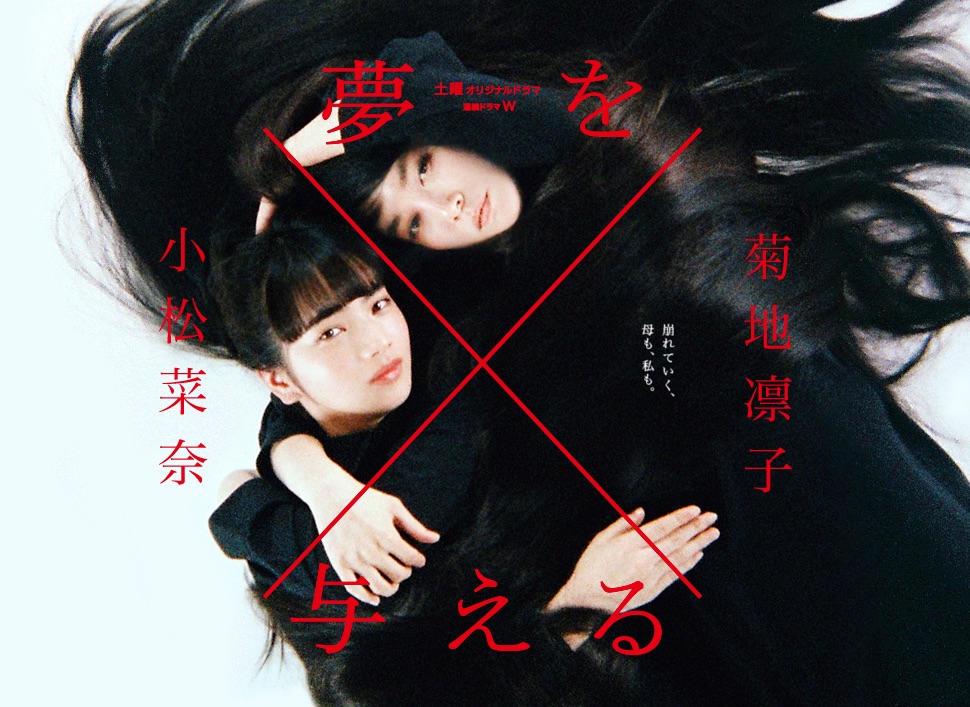 13 years ago, the Abe family moved to a town in the suburbs, surrounded by nature. The Abe family consists of their French father Toma (De Lencquesaing Nozomi), his Japanese wife Mikiko (Rinko Kikuchi) and their beautiful daughter Yuko (Kanon Tani). They appear like the perfect family. Mikiko managed to get her daughter Yuko to take part in a CM audition and she was picked by Murano (Joe Odagiri), director of the advertising agency. Yuko is now in show business.

Several years later, Yuko (Nana Komatsu) transfers to a large entertainment company. As her mother wishes, Yuko is now popular and appears on the cover of magazines, variety shows and drama series. Yuko, though, feels an uncomfortable imbalance between her public image and her real self. During this time, she meets a dancer, Seiko (Mackenyu), who marches to the beat of his own drum, and falls in love with him. The nightmare begins.

Hyunlady Feb 16 2019 7:51 am Hey I'm another who watched this because I saw mackenyu and nana kiss scene cuts lol

Good movie overall. The story kinda realistic and made me feel sad to know if its what happened behind the scene of child celebrities lives. Hope they all grew up well.

@Angela: joe odagiri is hot I kinda ship them too until I realize ((SPOILER)) this is not another highschool student-older guy plot usually appear in japanese story lol kinda felt shocked when they show murano engaged but actually I feel glad this doesnt have creepy older men sexually abusing yuuko youth and the scandal was about her and seiko (mackenyu damn hes so hot here he should keep that hair)

((SPOILER)) I kinda scared yuuko kiled herself but glad she's not. And about the last CM is that real life or just CM. She got married with Tama and had a daughter?? That was cute ending tbh.

Angela May 04 2018 9:10 am (cont.) The romance isn't the main theme but all did went down after Yuuko and Seiko's scandal. (SPOILER) And ffs, Seiko was an asshole! No romance on his side. (END OF SPOILER)

I recommend this drama though!! I don't watch lots of asian dramas anymore but this was a great watch! Nana did good! Rinko Kikuchi was great!!

((Spoiler!!)) I hoped the showed Shingo's bg story even just a bit. His character reminded me of the stalker from Perfect Blue lol. Also, am I the only one who shipped Yuuko with Murano? Loool sorry i ship the weirdest ships oops. I would've loved if she ended up finding Toma though :(

Angela May 04 2018 9:01 am (cont.) This didn't really focus much on the romance part, though it was the root of things that went down. I recommend watching it!! It's a very easy watch! Nana did a good job!

((SPOILER!!!)) I would've liked a bg of the creepy director guy! I guess I'd have to read more about him from the book. Also, I would've liked more interaction between Murano and Yuuko since he was the only one who comforted her when she needed a break (also bc i shipped them lmaooo oops sorry i always ship the weirdest ship). Also dang i hated the mom so much but she did a great job, acting wise! The dad tho...not so much lol.

Angela May 04 2018 8:52 am I'd have to disagree on the comment below. This story is about what fame does to a person, especially when you start out young. It gives us a glimpse of the gritty things you have to do for fame and consequences of every bit of action that you do.

chien Oct 31 2017 10:52 pm honestly the synopsis is a little misleading, the premise revolves more around Yuko herself then the relationship between her and Seiko. But overall i enjoyed this a lot.

annaface Oct 19 2017 3:21 am I saw a youtube video thumbnail of a guy kissing a girl. Their faces werent showed but i fell in love with the guys jawline. you know what i mean right? AHAH and so i clicked. And i cant believe i tought i was watching jun matsumoto dance! and so i watched more and i cant effin believe it Im totally seeing nana komatsu!!!!! nana komatsu!!! woooooo! if i see nana komatsu then ill click watch no matter if the movie is tupid or what. i just need to see her. well now i know it isnt jun matsumoto but i like him now hehehhe. btw, the summary made me want to watch it more ahahha She fell in love and then the nightmare begins.

Drama Lover Jan 11 2017 8:35 am Mackenyu looks like Jun Matsumoto in that picture,, anyways LOVE THIS DRAMA!

HELLO OMG I just read your comment today, thank you so much that you appreciated my reccomendation. I was also dissapointed why there is no comment in this section because it was a really good drama. I'm glad I watch this because I'm really a fan of Nana Komatsu. Thats why when i finished the drama I want people to know that they should watch this because this is really awesome.

I'm currently waiting for the release of the Movie Drowning Love in the internet. Nana komatsu is also the lead character their. It was based on manga Oboreru Knife and I really fell in love with that anime because it isn't your typical love story, it is deep and kinda dark manga you should try reading it. And I hope the movie give justice to the story <3

Everything is perfect, the cast, the storyline, the music and the sequence of the events!

I really recommend this to everyone especially to Nana Komatsu's fan! she is very versatile, Ms Rinko Kikuchi potrayed her role as a Mother really well! Joe Odagiri's role was really perfect! Everything is perfect! I love everything in this Drama! it was short but it really delivered the story well!

Please watch this, you will never regret it.