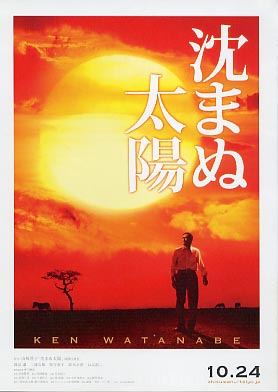 Hajime Onchi (Ken Watanabe) works for Goku Airlines. He becomes the head of the labor union and fights to improve working conditions for the workers. The corporate bosses at Goku Airlines doesn't take kindly to Hajime's efforts and soon banishes him to distant work locations. Hajime spends the next ten years working in branch offices located in Pakistan, Iran, and Kenya. His corporate bosses offer to bring him back to Japan if he would leave the union and apologize for his actions. Hajime refuses.

Meanwhile, his fellow labor union partner, Shiro Gyoten (Tomokazu Miura), has long sold out to management and is climbing the ranks in the corporate office. Hajime feels betrayed by his co-worker, but stoically works in Kenya with nothing much else to do except watch the sun.

Finally, after 10 years in exile, Hajime is ordered back to the head office in Japan. But everything is not roses on his return. His co-workers like Kazuo Yagi (Teruyuki Kagawa) are bullied for their labor union actions, while sellouts like Shiro Gyoten are rapidly ascending the corporate ladder. Hajime's new job is a difficult one as well. The worst airline accident in Japanese history then occurs. A Goku jumbo jet crashes and kills hundreds of passengers. Hajime is assigned to console the victim's families and provide restitution to those families ...

Paul Lau Apr 24 2012 8:34 pm Where can I buy a copy of this movie (in DVD format) "The Unbroken/The Sun That Doesn't Set" with English sub-title in Petaling Jaya, Malaysia? I have tried in many local outlets but without success. Please help. Thank you.