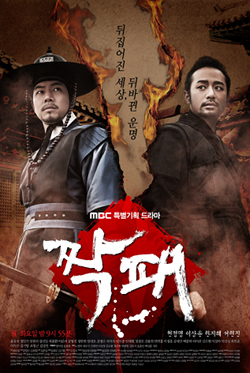 "The Duo" is a period drama centered around two men who were switched at birth and goes on to live completely different lives.

In the rich noble family Kim Jin-Sa (Choi Jong-Hwan), a baby is born but the mother dies after giving birth.

Meanwhile, two slaves named Map-Soon and Soe-Dol runs away from their owner's home. Map-Son was raped her owner and pregnant at the time. In a beggar's hut, Map-Soon gives birth to a male baby.

beboadni Feb 10 2021 2:10 am The theme of socialism features prominently in The Duo. The drama narrates the life of the leader of an anti-establishment group from birth to death. The protagonist desires a world in which all people belong to the same class. One does not even witness a scene from the royal palace in the drama. In spite of his being a beggar in childhood, afflicted by heavy physical and psychological pressures and discriminations, the protagonist thrives and never seeks revenge. He is kind to the people around him and even those who have wronged him. Then how come he becomes the leader of an anti-establishment group and commits murder later? If the story is not opposing a person or persons, then what is it opposing to? The answer lies in the fact that the evil of the drama is the system and thought ruling over the unfair world of the story. Those who approach this system become more negative and those who turn away from it become more positive; those who guard the existing thought and those who stand up to it. And there is another group of people who retreat from troubles and unrest in order to maintain their fairly peaceful life. The story becomes more complex when the positive characters face an important challenge. Is the deadly path we are stepping into going to lead to a fairer world or have we just deprived ourselves of the privilege of life? The Duo depicts the futile efforts of a small group of people who stand in opposition to the conventional social, political, and economic principles of the society. These efforts include sparking revolts, stealing from the rich, and distributing among the poor, as well as assassinating the government officials. The drama clearly shows how the life conditions of human beings affect their beliefs and stances regarding various issues. The story includes four main characters who hold different viewpoints. Chun-doong is the one who comes to a certain belief after experiencing mental ups and downs, and he is murdered trying to make a just world. Although as a police chief, Gwi-dong speaks of justice, he is a conservative and he is the one who annihilates the group. Dong-nyeo does not even believe in the existence of injustice and believes that class distinctions are laws of nature and are basically right. Dal-yi is highly skilled at handling pistols. She is brave and she holds opinions similar to Chun-doongs’. However, she regrets her beliefs and purposes, and after Chun-doong’s murder and the disintegration of the group, she resorts to a normal life. In the end, all of these futile efforts might have made the characters of the story ponder and reconsider their thoughts and their consciences.

It is about an anti-government group with a Marxist theme.

The background of the drama is not set in a grand palace but an everyday market and talks not of the success of a great hero but the agony of common people. The Duo portrays the everyday lives and loves of the commoners and outcasts during 19th century Korea: Slaves, beggars, leather shoemakers, thieves, street bums and butchers, people who were poor yet good at heart. It is centered on the humanism and sentiments of those whose life stories have often been neglected in the typical "royal family centered" dramas.

Somebody Jun 17 2020 4:27 pm This is one of those small project historical dramas where the story happens far away from capital city, king and other Political ministers

princecoolio Sep 08 2017 12:51 am Movie isn't great people, not worth watching twice. Get real. Who cares about the people playing their roles, doesn't make the movies better no matter,It's the script that counts. me this is maybe a 5 rated movie. 32 eps is to long for any movie series.

dido May 19 2017 5:38 am it started so slow and ended abruptly where too many missings parts..but still it was good..i enjoyed watching the characters of soe-dol and keun-nyeon..great portrayal..ep 20 or 24 would have been enough for this drama..

Lorna j. Bridges Dec 01 2015 11:54 pm What an awesome drama this is one of the best historical yet. It's up there in my top five. Lee Sang-Yoon Beautful Awesome Actor Very Convincing as well as Handsome

fashionista Apr 20 2014 12:34 pm ...i stopped watching this series but when i realized my 2 favorite actor on this ,yayks have to watch it again, excited

John Jul 07 2013 2:49 pm Regarding my previous post after watching only half of the episodes.....never mind. Woops. This turned out to be one of my favorite dramas...typical rushed ending is my only complaint. There are some holes and the final confrontation should have lasted at least one episode instead of just a few minutes......

John Jul 05 2013 7:11 pm Interesting the the two most attractive female characters...played by HJH and YYS..from their respective generations also turn out to be the most self centered and shallow. I wonder if the Writers were trying to make a point here like Beauty only being skin deep. Their destestability is often so subtle, but they are pretty cold and heartless even though they obviously see themselves as victims.