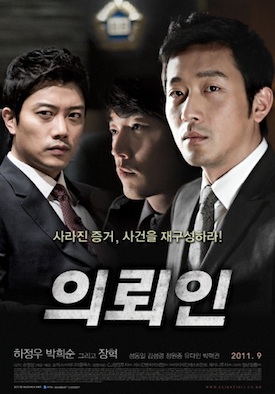 On his wedding anniversary, Han Chul-Min (Jang Hyuk) drives into his apartment complex parking lot and sees a large crowd gathered by the entryway into the apartment. Chul-Min enters his apartment holding a bouquet of flowers for his wife when he sees police officers scattered about collecting evidence. Chul-Min walks into his bedroom and sees a large pool of blood on the bed. The blood is fresh enough that it is still dripping onto the floor. A police officer handcuffs Chul-Min and takes him to the police station.

Jang Ho-Won (Sung Dong-Il), a broker for attorneys, brings the case of Han Chul-Min to attorney Kang Sung-Hee (Ha Jung-Woo). He informs the attorney that the alleged murder victim's body was never discovered, the police have yet to find any direct evidence connecting Chul-Min to the murder of his wife and his arrest is all based on circumstantial evidence. Kang Sun-Hee takes the case and applies in court for a jury trial.

Prosecutor Ahn Min-Ho (Park Hee-Soon) takes charge of the Han Chul-Min murder case. He has little doubt in the guilt of Chul-Min. Confirming his suspicions he discovers that Han Chul-Min was arrested as the prime suspect in a serial murder case, but later released on insufficient evidence.

Is Han Chul-Min a cold blooded killer or the victim of a coverup? Prosecutor Ahn Min-Ho and Attorney Jang Ho-Won step into court with the fate of Han Chul-Min hanging in the balance. 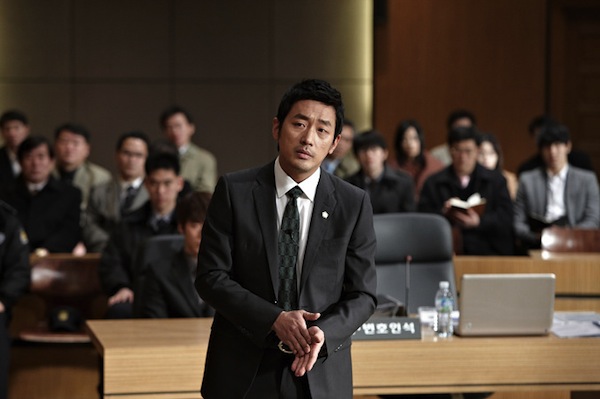 StarGladiator Oct 21 2021 6:02 pm Entertaining movie even if somewhat predictable but with a top cast of actors and a tight script. Jang Hyuk wasn't essy to recognize as the formidable actor from Money Flower --- he's quite good.

Danny Dec 19 2020 6:28 pm What made the movie incredible with the usual plot with movies like this despite the familiarity of it, is how everything was moving along, how was handled. Creating a sense of urgency and reliability about the case and how the prosecutors work is done. Two hours of run time and by the trhity seven minutes in you are dropped into a well fast phase developing plot.

The movie settles down, but doesn't loose its attraction to what comes next. Retaking the same phase in how each side goes about solving the truth behind this murder. The movie doesn't drag at all by being too engrossed in conversations nor prolonged character developments or unnecessary fillers. All the contrary, a simple case with a simple plot that develops extremely well, ending in the way it did making it a great watch.

Mindo Nov 24 2017 2:46 am Impressive. Excellent perfomance from the actors. My favorite part was when Prosecutor Ahn tells Lawyer Kang that Han didn’t look back at the door on a count of three. Love it.

Mor yan Jul 15 2017 3:37 am This film is very similar to the movie Primal Fear. A good one though since the man was arrested after sentenced "not guilty"

smileyme Nov 05 2015 2:45 am This movie is very good Ha jung woo, Park hee seon and Jang Hyuk is simply amazing did not guess that Han cheol min is the killer

Ki Oct 07 2011 8:57 pm Caught "The Client" here in Korea on it's opening day. I'm a huge fan of Ha Jung-Woo so I was really excited to watch the film. After watching the film I had mixed emotions over the film.

THE GOOD - as expected the cast was awesome! Highlight of the film for me, of course, was Ha Jung-Woo. This time around, his character held a surprising amount of comedic play, kind of like a milder version Kim Myung-Min's Detective K, but set in the modern day and played as an attorney rather than a detective. His adversary, played by Park Hee-Soon, was also highly striking, always carrying this sense of power which felt perfect for his character of a top notch prosecutor. The third actor Jang Hyuk played the movie's pivotal character. I didn't feel Jang Hyuk pulled off his role nearly as well as his two main counterparts, but he didn't embarrass himself or bring the movie down either. He just wasn't on the same level so to speak.

THE BAD - Movie relies on a handful of plot twists to keep the audience guessing on the innocence or guilt of the accused character. These twists, when revealed, just felt anti-climatic and out of place. I expect to see these types of twists in more run-of-the-mill Korean thrillers, but didn't expect it in "The Client". Rather than relying on the legal battle between top attorney vs. prosecutor that the movie establed so well early on, "The Client" opted to rely on cheaper plot twists to get to the finish line. That left a bad taste for me.

The court room dealings, investigative work by both legal teams and the strong performances by Ha Jung-Woo and Park Hee-Soon were the movie's strong points for me. What held the movie back was the screenplay's reliance on overused plot tricks from Korean & Hollywood thriller/mystery films to resolve the film. I did enjoy "The Client" & wouldn't hesistate to recommend it to others - just wished the battle stayed in the courtroom and continued to focus on the legal battle between attorney & prosecutor.

Josh Oct 07 2011 11:46 am Hello! I am a HUGE fan of Korean cinema and this film has certainly struck interest in me. Can any locals or anyone who's had the pleasure of seeing this film give me a little review or opinion on it? Much would be appreciated!!!