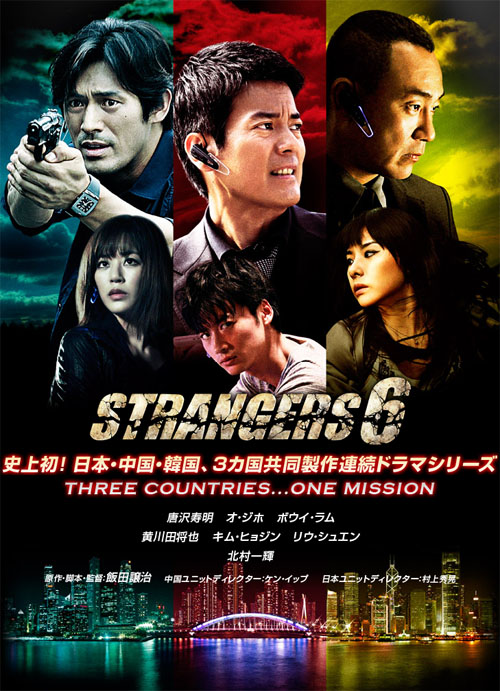 The Korean-Chinese-Japanese collaborative drama series “Strangers 6″ is about a group of six experts from the police forces of Korea, China, and Japan who are secretly gathered to protect the countries’ economic futures.

“Strangers 6″ is set in the near future and centers around the fictional Chinese city of ‘Haiwan’, a huge economical hub without any national boundaries for companies from South Korea, Japan, and China. However, the city is doomed to collapse under a gigantic earthquake predicted to hit the city within the next three months. There’s a chance to prevent the disaster by installing a special device underneath the city, but this would require cutting-edge technology and an unimaginable sum of money from all three countries.

Believing that this is the only way to protect their economy, the countries are quick to agree on this joint-operation and hasten their efforts in order to complete the device as soon as possible. However, somebody is trying to interfere with the project and attempts to assassinate the people involved. In order to protect the project and to find out who is behind the assassination plot, the three countries form a top-secret group, ‘Strangers 6′, which is made up of their best experts and agents.

Crystal Jan 22 2012 10:10 pm Sorry but this page needs to be edited...this is not a Korean drama, this is a Japanese-Korean-Chinese joint production, and the 2 Japanese actors are the main ones, then it's the Korean cast.

dria.andria Oct 20 2011 1:55 am Am i the only one that get excited because Toshiaki is going to participate in this drama? :D